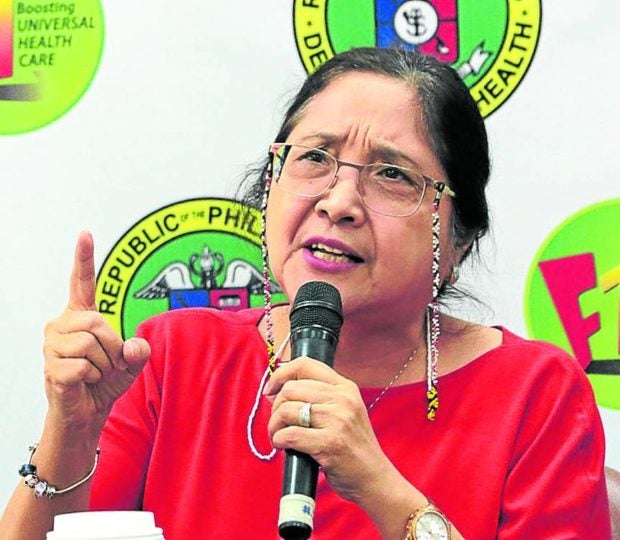 The leader of a doctors’ group on Thursday cautioned against an early lowering of the alert level for Metro Manila, advising authorities to “wait a little longer” while building up statistical data to back up such a move.

Cabinet Secretary Karlo Nograles, who is also cochair of the Inter-Agency Task Force for the Management of Emerging Infectious Diseases (IATF), earlier said the cases in the National Capital Region (NCR) were declining and the restrictions could be eased.

He said an announcement would be made by the government’s pandemic managers on Saturday or Sunday on whether the current alert level 3 for NCR would be maintained or eased from Feb. 1 to Feb. 15.

But Dr. Maricar Limpin, president of the Philippine College of Physicians, said the authorities should continue to observe the number of COVID-19 cases for a few more weeks before placing Metro Manila under looser quarantine restrictions.“Maybe we should wait a little longer and check first our statistics,” she told the Inquirer.

In a television interview, Limpin said the current number of cases may not reflect the actual COVID-19 infections as many people were not getting tested.18K new cases

Limpin said it would probably be safe to lower the alert level in NCR after Feb. 15.Nograles said the IATF would be looking at COVID-19 bed utilization rate in hospitals, average daily attack rate (Adar) and the two-week growth rate.

Dr. Tony Leachon, a former consultant to the National Task Force Against COVID-19, agreed with Limpin, saying “it might be premature” to declare alert level 2 in NCR.

“Though the cases are going down, this might be underreported due to the noninclusion of rapid antigen tests in the DOH bulletin,” he said. “The positivity rate remains high at 35 percent and will continue viral transmission without adequate testings.”The entry of the highly transmissible Omicron variant was adding another complication to the uneven level of infections in an archipelagic country like the Philippines, Leachon said.“It’s difficult to fight multiple battles in multiple fronts, given our limited resources and weak health-care system in the countryside,” he said.

“If we don’t improve our positivity rate and vaccination rate, any variant can easily penetrate the country,” Leachon said.Dr. Cynthia Saloma, executive director of the Philippine Genome Center (PGC), on Thursday said Omicron’s BA.2 subvariant, also known as “stealth Omicron,” “is already all over the country.”The PGC has found 517 cases with the Omicron variant and 336 of them were of the BA.2 subvariant and 180 BA.1 subvariant. There was only one B.1.1.525, or the original variant, which was carried by a foreigner, Saloma said during Thursday’s Laging Handa briefing.

Of the 336 BA.2 subvariant, 248 came from NCR. BA.2 also was detected in Calabarzon and 10 other regions, but that did not necessarily mean that the other regions do not have the “stealth Omicron,” she said.

Saloma said the PGC had available data on only 165 cases.

She said most of those infected were asymptomatic, but those who were not had “largely milder” symptoms, “mostly” upper respiratory tract infections common in Omicron cases.

Saloma said, however, that while asymptomatic cases and mild symptoms had been observed, that “doesn’t mean that [Omicron] cannot be lethal.”Also, she said, since many of the samples came from NCR and Calabarzon, regions with high vaccinations, and this could explain why there were more cases that were asymptomatic or milder compared to the Delta variant infections.

Thursday’s DOH case bulletin showed a positivity rate of 35.2 percent, slightly lower than the 35.8 percent the previous day. This was based on 61,013 people tested on Tuesday.

The 22,014 recoveries brought the total number of survivors to 3,213,190.The 74 fatalities raised the death toll to 53,736, the DOH said. It said 69 deaths occurred this month, while the rest happened between April 2020 and October 2021 but reported only on Thursday. —WITH A REPORT FROM JEROME ANING INQ