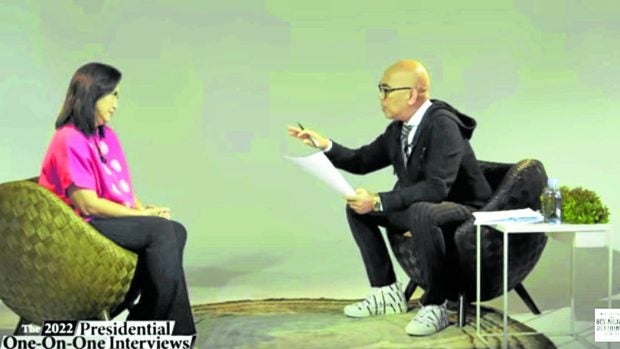 Was he just being true to his moniker?

Social media was abuzz on Wednesday night over Vice President Leni Robredo’s performance at “King of Talk” Boy Abunda’s interviews with the presidential candidates, especially her stinging remarks on why Filipinos should not vote for the other contenders.

Her supporters applauded her performance—the hashtag #LeniAngatSaLahat (roughly, LeniUpstagesThemAll) trended No. 1 on Twitter last night—but Abunda drew brickbats for interrupting the flow of her answers when she had only five minutes to respond to questions.

Some netizens said he was simply probing her. Others said it was a form of “mansplaining,” or when a man talks down or “overexplains” to a woman.

Sought for comment, feminist scholars said it was not mansplaining, but added that such instances highlighted the unique issues that Robredo, the lone woman in the presidential election, would continue to face in the battle for the top post.

On Thursday, an unimpeachable source close to Abunda denied that he was being “condescending” or “patronizing” to Robredo, but conceded that the impression might have arisen because of unclear interview rules.

According to the source, all the candidates were presented decks about the format of “The Boy Abunda Presidential Interviews,” where they would be given five minutes to answer 10 questions. All of them agreed to this format.

The source said that after two minutes of uninterrupted talk, Abunda was allowed to “interject, interpose and ask follow-up questions,” but the two-minute rule was not shown onscreen anymore to allow him to be flexible and be spared dead air if the candidates went overtime or undertime.

Abunda came across as interrupting Robredo because he was “highly engaged” with her detailed answers, the source said.It’s a view shared by Dr. Jean Encinas Franco, a political scientist and gender equality scholar at the University of the Philippines.

Said the source: “He was really engaged with her because she was bringing a lot to the table. He wanted her to elaborate on her plans. Isn’t that helping the Vice President? [Because] follow-up questions aren’t planned, he was more conscious about that.”Franco echoed this perception, saying: “[Abunda] is probably like that to Leni because he is getting much more from her. However, it would still bode well if we looked at how he would conduct the interview” with Manila Mayor Francisco “Isko Moreno” Domagoso and Sen. Manny Pacquiao.

Sociologist Athena Presto, lecturer at the Ateneo de Manila University, agreed that Abunda “was indeed not mansplaining, but there was definitely gender-related discomfort there.”

It was observed that Abunda appeared more forcefully assertive with Robredo compared to the first two interviewees of “The Boy Abunda Presidential Interviews,” Ferdinand Marcos Jr. and Sen. Panfilo Lacson.

Quantitatively, however, Abunda interrupted Lacson the most (70 times), followed by Robredo (64 times), and Marcos (58 times), per the source who works with the team.‘Brusqueness’

“In any case, [these] are not metrics of kindness or rudeness,” the source said. “Just because you were not interrupted as much does not mean your answers were any better [and vice versa].”

But Presto said “the force, brusqueness, of the interactions is somewhat reminiscent of how women in politics are treated.” “It’s not mansplaining, but it’s the denial of her voice to speak and to let her finish,” the sociologist said.To be fair, Presto said, Robredo performed more strongly in the interview with Abunda than in journalist Jessica Soho’s presidential interviews aired last Saturday.

“Robredo was more sincere, precise and more detailed there,” Presto said. “However, [the Soho interviews] were definitely more specific and research-oriented.”

Franco pointed out that Abunda “had never presented himself to be a journalist, anyway,” She added: “But one good thing that did come out from this is that he and Soho have a different audience, and his interview will help reach the masses. This is the best way to combat disinformation.”

Abunda, who had graduated with a Ph.D. in social development, “was not an apologist or a mercenary interviewer but he is also not a walk in the park,” the source stressed.

Still, Presto and Franco agreed that unlike her rivals, Robredo’s fight for the presidency in the next months would be additionally burdened by unfair gender norms and patriarchal expectations.

This was clearest when Robredo responded to the question of why the other candidates should not be elected president: Marcos Jr. because he was “a liar and undependable during difficult times,” Domagoso because he had “vague stances” on issues, Lacson because “he was all talk but lacking on-the-ground experience,” and Pacquiao because “a good heart is not enough.”Both Marcos Jr. and Lacson dodged the question in their respective interviews. But they smarted from her comments and called her out for supposed “negative campaigning.”

Franco said that while Robredo’s remarks were “off-brand” from her usual calm, indirect manner, people “have to see this feisty side of her, because for the past six years people have been vilifying her, infantilizing her, feminizing her.”

“She really has to fight back because unfortunately, Filipinos—and for that matter, the rest of the world—like leaders who have this ‘masculine’ side. She has to be seen as a fighter,” Franco said.