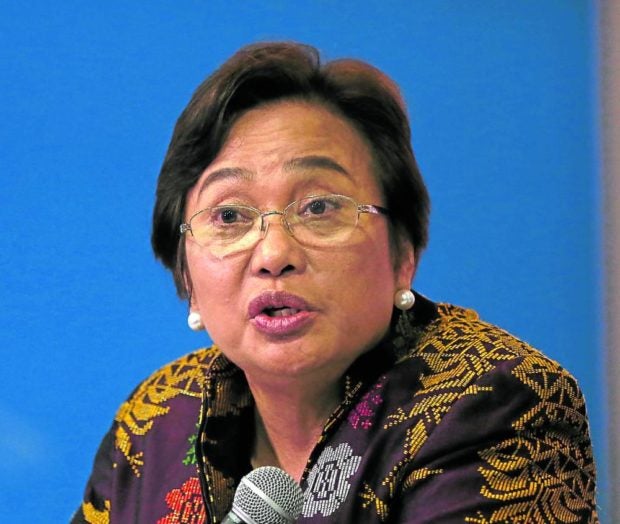 BACOLOD CITY—An outspoken member of the Commission on Elections (Comelec) who admitted voting to disqualify presidential candidate Ferdinand “Bongbong” Marcos Jr. on Thursday said “political interference” was delaying the release of the decision on the case.

The son and namesake of the late dictator, who is the front-runner in recent surveys among 10 presidential aspirants, faced one case to nullify his certificate of candidacy and four others to disqualify him from running in the May 9 elections as standard-bearer of the little-known Partido Federal ng Pilipinas (PFP). His running mate is President Duterte’s daughter, Davao City Mayor Sara Duterte.

“I believe there is political interference here,” Comelec Commissioner Rowena Guanzon told the Inquirer in a telephone interview.

“It was delayed because they already know my vote. They think if I retire my vote will not count, which is not true,” she said.

She was referring to pro-Marcos politicians, but did not elaborate.

Guanzon is set to retire on Feb. 2 along with Comelec Chair Sheriff Abas and Commissioner Antonio Kho Jr.

She said she had called up Salvador Panelo, former chief presidential legal counsel and spokesperson, who told her that Mr. Duterte had instructions not to interfere with Comelec.

Guanzon, who is presiding commissioner of the Comelec’s First Division, said she voted for the disqualification of Marcos Jr. “because he was convicted of an offense involving moral turpitude.”

The Comelec First Division is handling three disqualification cases filed by Akbayan and other activist groups, the Campaign Against the Return of the Marcoses and Martial Law, and a group claiming to be the original members of PFP.

Guanzon said that even if the division’s resolution came out after her retirement on Feb. 2, her vote for the disqualification would still be counted.

According to Guanzon, it was proven that Marcos did not pay his taxes for four years when he was vice governor and later governor of Ilocos Norte and was sentenced by a Regional Trial Court to imprisonment and ordered to pay a fine.

He filed an appeal with the Court of Appeals that ordered him to only pay a fine.

“I voted to DQ (disqualify),” Guanzon, who presides over the three-member First Division, reiterated in a separate interview with GMA 7 also on Thursday.

In the TV interview, Guanzon said she had disclosed her vote due to the “unreasonable” delay in the promulgation of the division’s decision.

“I suspect interference going on. Some people are trying to influence the commissioners. That’s what I don’t like,” she said.

She did not say how the other members of the First Division—Marlon Casquejo and Aimee Ferolino—had voted.

“I will release my separate opinion soon no matter what the ponente does,” Guanzon tweeted earlier Thursday.

It was Ferolino who was assigned as the ponente, or the division member designated to write the decision or resolution on the case, Guanzon said.

“Yes, it will be a mess. Whoever is interfering in these cases should know that they are not helping anyone. It is best that the cases go up to the Supreme Court as soon as possible,” tweeted Guanzon, who is the only poll commissioner with a social media account.

Members of the Comelec, following protocols of a collegial body, do not normally announce their votes or release their separate opinions ahead of the promulgation of their decisions.

Guanzon told the Inquirer that she and the two other First Division members agreed that the resolution of the case that was raffled off to their division on Jan. 10 would be out in seven days, but Ferolino has yet to release the resolution.

Guanzon said she and Casquejo had been trying to reach Ferolino who was not replying to their calls.

“Ferolino is not sick and her quarantine is over after she said she was a close contact of one of her lawyers who was hit with COVID-19,” Guanzon said.

She said she had requested Comelec Chair Abas to call Ferolino.

An option for Ferolino is to waive writing the resolution if she could not finish it on time and Casquejo could take over, Guanzon said.

The four other cases argued that Marcos was disqualified from running for election because under the National Internal Revenue Code, he should be barred for life from holding public office due to his tax evasion conviction in 1995.

The Second Division ruled that the Court of Appeals decision in 1997 that modified the penalties meted on him did not expressly include perpetual disqualification from holding public office.

The petitioners have appealed the division before the seven-member Comelec sitting as a whole.

The Second Division has yet to resolve another similar case brought against Marcos Jr.

Until President Duterte appoints their replacements, Comelec will be left with only four commissioners—Inting, Bulay, Casquejo and Ferolino. —WITH A REPORT FROM DONA PAZZIBUGAN