Marcos Jr. and SALNs: The importance of transparency 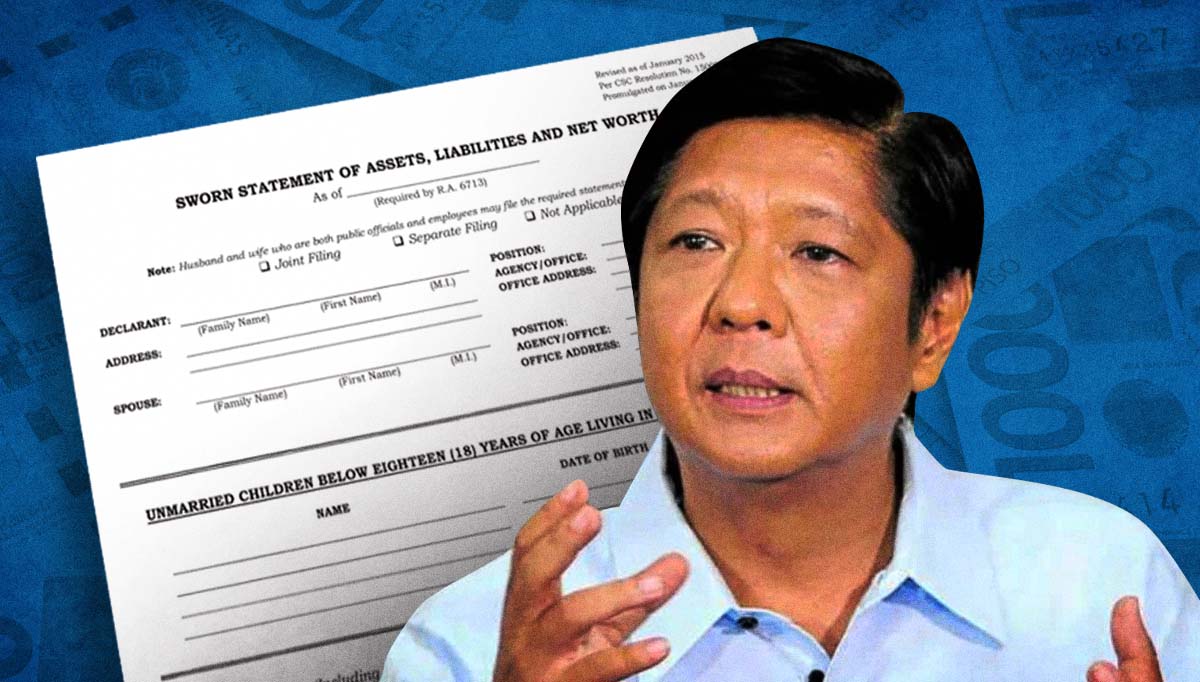 MANILA, Philippines—President Rodrigo Duterte may have unwittingly inspired a shift in attitude among officials and politicians toward statements of assets, liabilities and net worth (SALN) from full transparency to selective release of the document.

The question of whether to make SALN public or not is also now one of the biggest being thrown at candidates aiming to replace Duterte after the May elections.

Duterte’s last publicly accessible SALN was in 2017, where he declared a net worth of P28.5 million. Despite requests and demands from critics to disclose the documents, the President’s 2018 and 2019 SALNs have yet to be made public.

Malacañang said last year that the President was leaving it up to the Office of the Ombudsman to release his SALNs to the public.

Government officials, starting from the President, are required by law to submit SALNs to the Ombudsman. But Ombudsman Samuel Martires had imposed a policy to keep SALNs out of the public eye unless required by a court or for purposes that Martires deems to be in the interest of the people.

In 2020, Duterte explained that he was only respecting the guidelines issued by the Office of the Ombudsman—which set a limit on who can access government officials’ SALNs.

The SALN issue emerged on the top of those that presidential candidates are being asked to address when Ferdinand Marcos Jr. made headlines for being the only one among the candidates to say he would not make public his SALNs then only to flip-flop in other interviews shortly after he made the statement.

Statements made in public by Marcos Jr. on SALNs had been recorded, though.

October 8, 2021: Marcos Jr. was interviewed on One News’ Sa Totoo Lang program and was asked about his stand on releasing his SALN to the public should he win as president.

Jan. 24, 2022: In a forum with the ALC media group, he was asked the same question. Marcos said he does not see any reason to make his or other officials’ SALN public if it will be weaponized and used to politically attack government officials.

“Depends on what the purposes are for making them public. If that purpose is going to be for political attack then why would we want to do that?” he said.

“All politicians have enemies. Enemies would find ways and even create issues even if there is none,” he said.

“I think we have to be more protective. If it is going to be used to victimize the person through their SALN, then I don’t see why you would do that,” he added.

Jan. 24, 2021-One PH’s “Sa Totoo Lang” interview: Later that day, Marcos was asked if he will adopt Duterte’s stand on making SALN accessible to the public.

This time, Marcos said he was willing to make his SALN available to the public.

“I was talking about my own SALN. I’m perfectly willing to release it,” he said when told about his previous statement in October 2021.

Still, citing the case of the late former Chief Justice Renato Corona, Marcos emphasized that SALNs of government officials could be used for political purposes.

Jan. 24, 2021-Radio interview over DZRH: Marcos Jr. was again asked the same question on the same day, this time in a radio interview.

Marcos, again, said he was willing to show his SALN if he becomes the country’s next president. He added that his SALN, as well as the SALNs of his Cabinet officials, should be released to the public.

“I can speak for myself, and of course, if I’m elected, then I can speak to those who I have brought into the government,” he said.

However, he believed that releasing SALNs should be voluntary for other government officials.

“If you’re an appointive position in government, and you place them but their SALNs are being inquired, why would you hide it? That’s dangerous,” he continued.

“As for elected officials, you can’t tell senators you have to show your SALNs whether you like it or not. You can’t boss them around like that. I can only speak for myself and, if elected, then those I have brought into the government,” he added.

Throughout his interviews last Jan. 24, Marcos repeatedly recalled Corona’s impeachment case as he shared his concern over SALNs being used for political attacks.

The former chief justice was impeached in 2012 after the Senate, as an impeachment court, found him guilty of failing to disclose around $2.4 million and P80 million in bank deposits in his SALN.

“If you look at it even more closely, it [impeachment] was a political decision, it was not an objective decision or an objective judgment on what he had done,” said Marcos Jr., who was a senator at the time and voted against removing Corona from office. 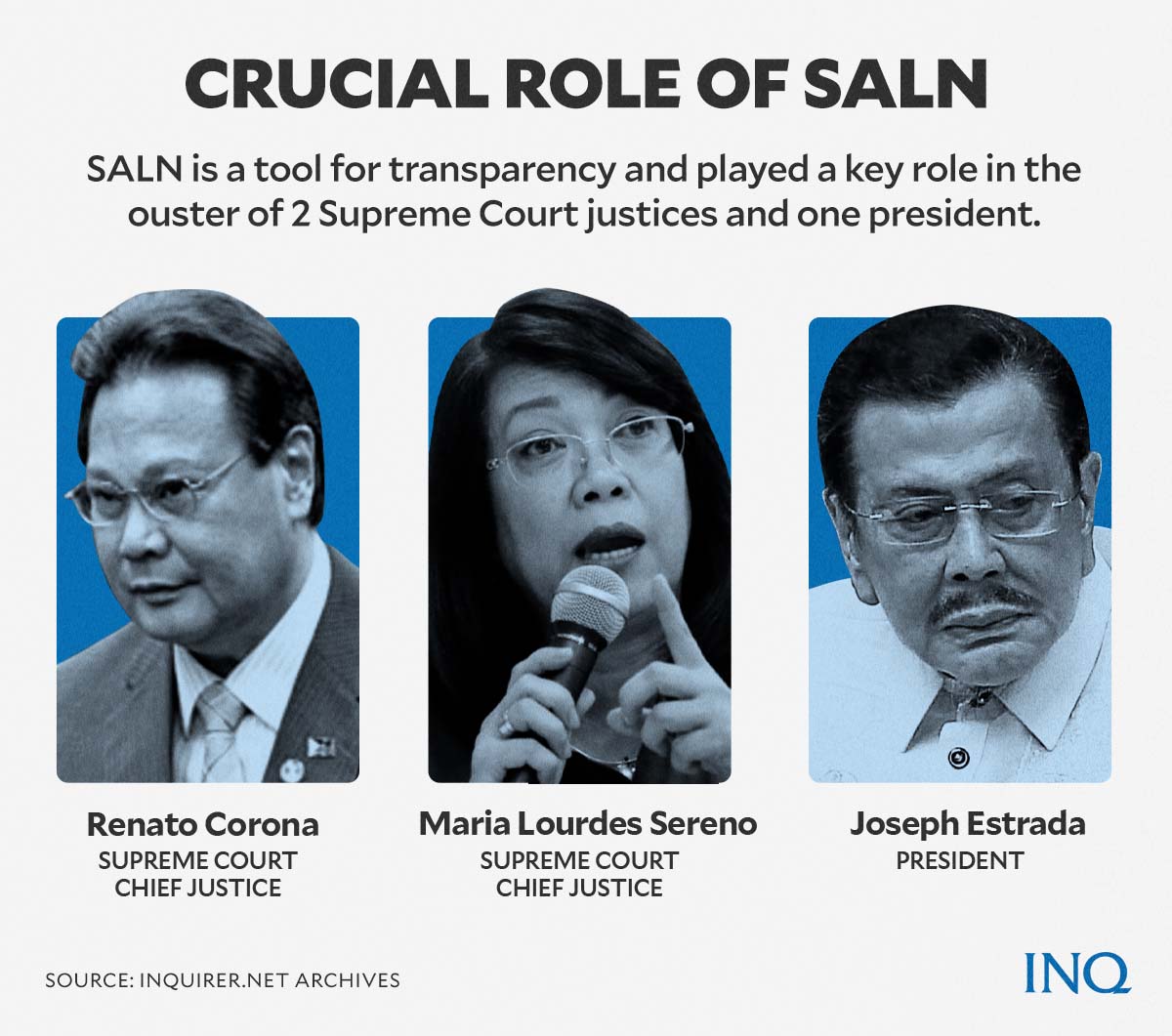 “So if that is going to be the purpose for it, some political agenda, then I don’t see the reason why the SALN should be given,” he added.

SALN, as a tool for transparency, played a major role in the ouster of Corona and another chief justice—Maria Lourdes Sereno, who was unseated in 2018, or two years into the term of Duterte.

The document also played a crucial role in the impeachment trials of former president Joseph Estrada, who was convicted of corruption by the Senate sitting as an impeachment court and driven out of office by a growing military-backed revolt. 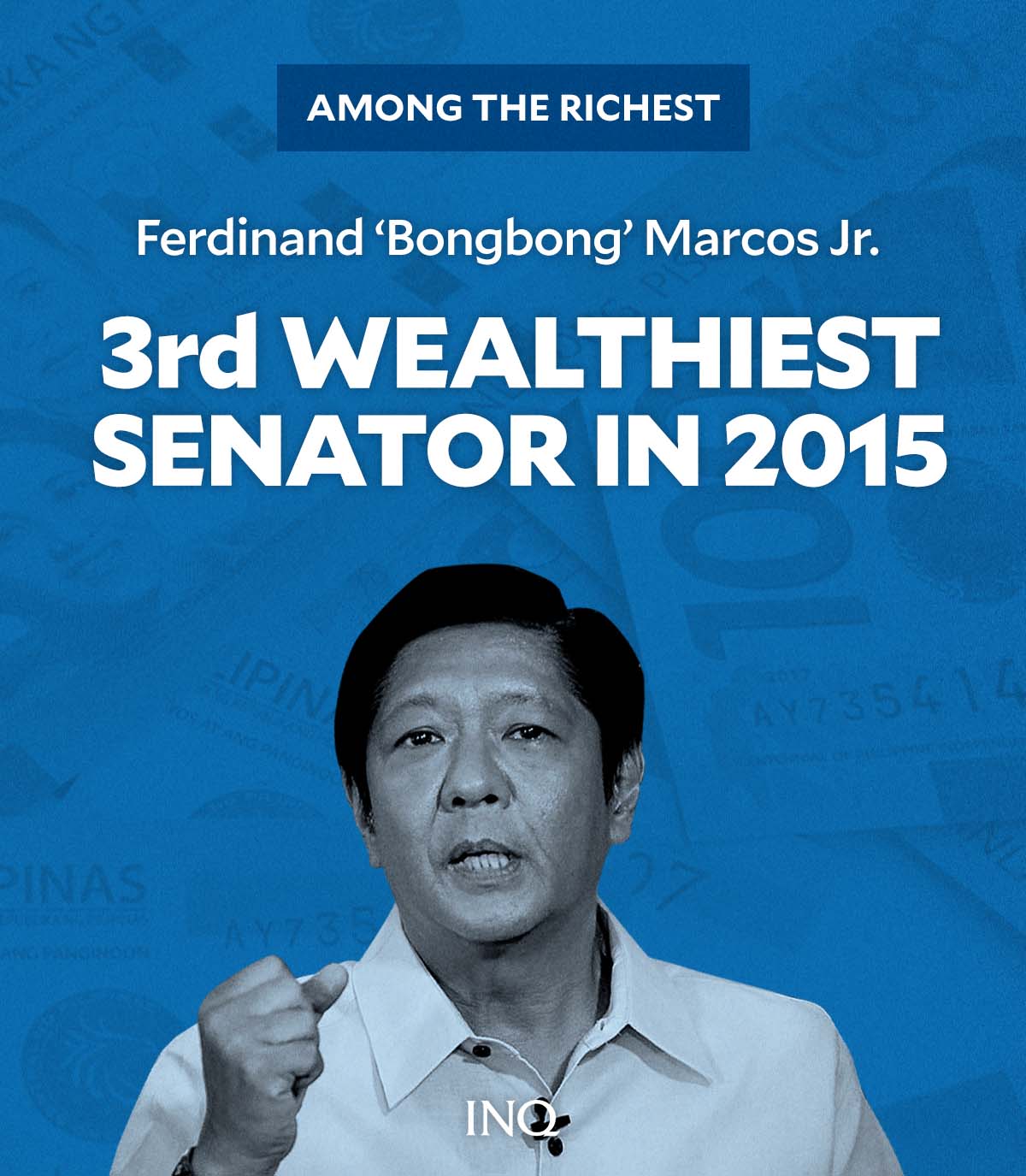 In 2016, Marcos—who was then vice presidential candidate and senator—submitted his SALN along with other senators in the 16th Congress.

Marcos was the third wealthiest among 24 senators in 2015.

A SALN is an important document that lists down a government official’s assets—cars, houses, cash in bank, business and financial interests—and liabilities. 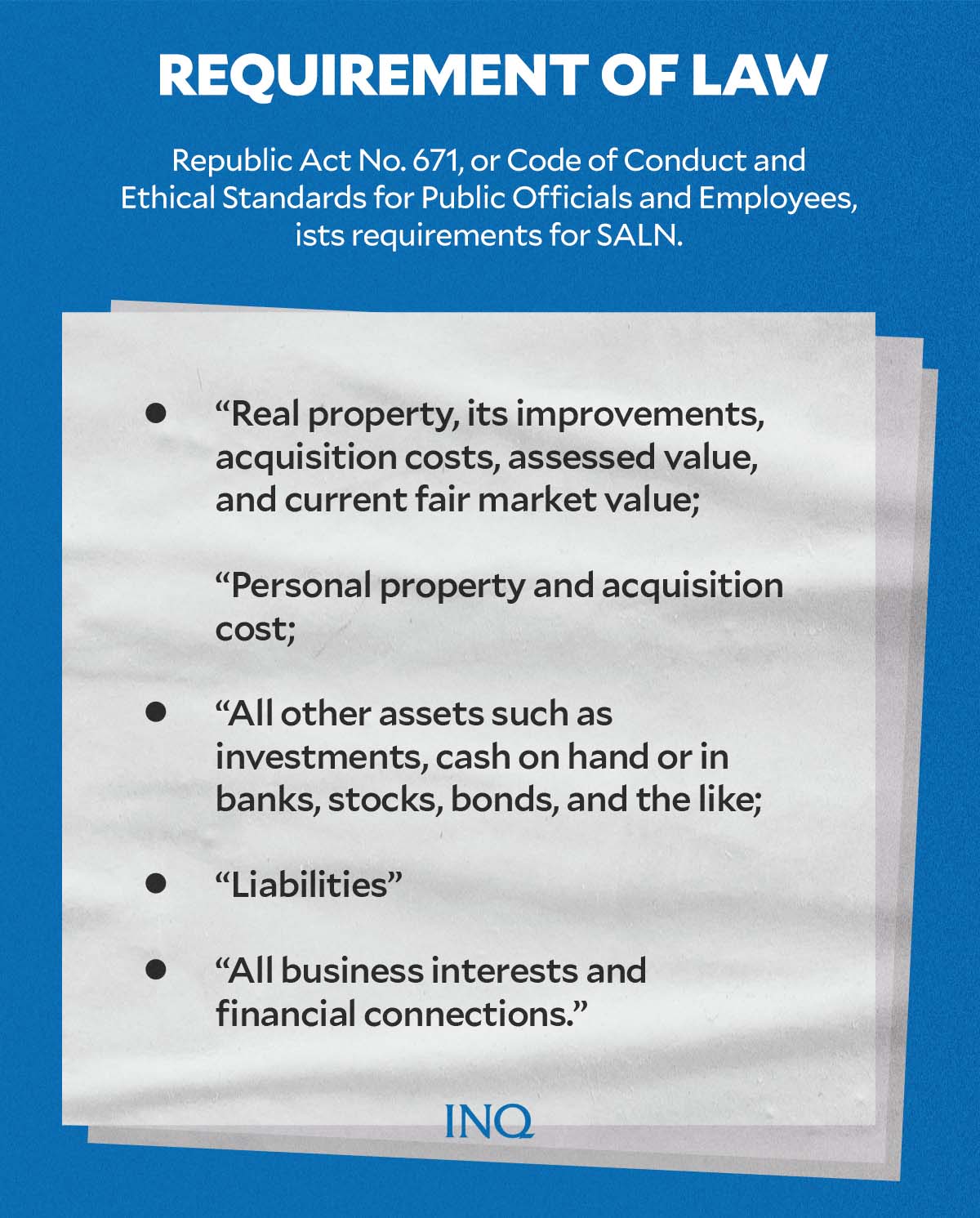 The logic behind requiring government officials to file SALNs is that the document, which should be sworn to and notarized by the official, would serve as a window on the official’s finances and could offer clues on unexplained wealth.

READ: Public and SALNs: Not just a fixation 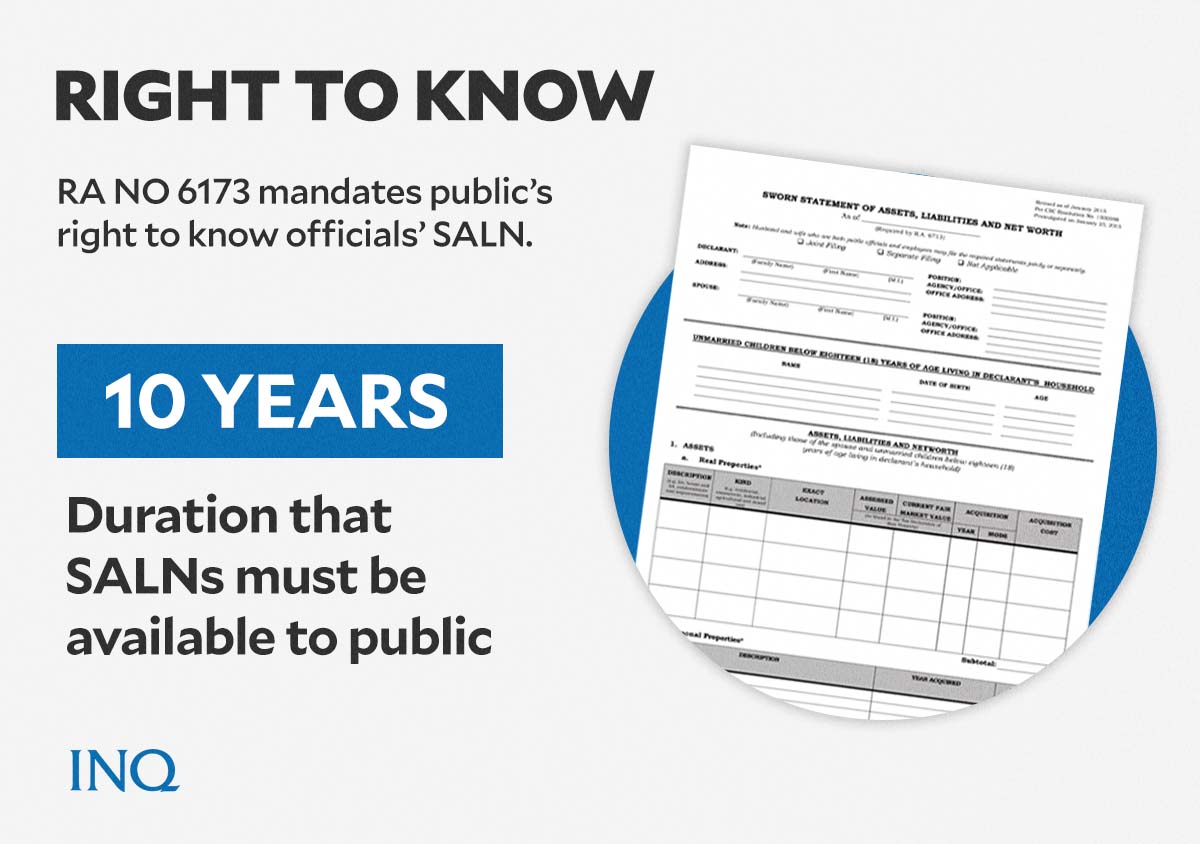 According to Republic Act (RA) No. 671, or the Code of Conduct and Ethical Standards for Public Officials and Employees, statements filed by public officials and employees should contain detailed information including:

The law also stated that the SALN should include assets, liabilities, net worth, and financial and business interests of the public official or employee’s relatives—specifically, their spouse and unmarried children under 18 years old who are living in the same household. 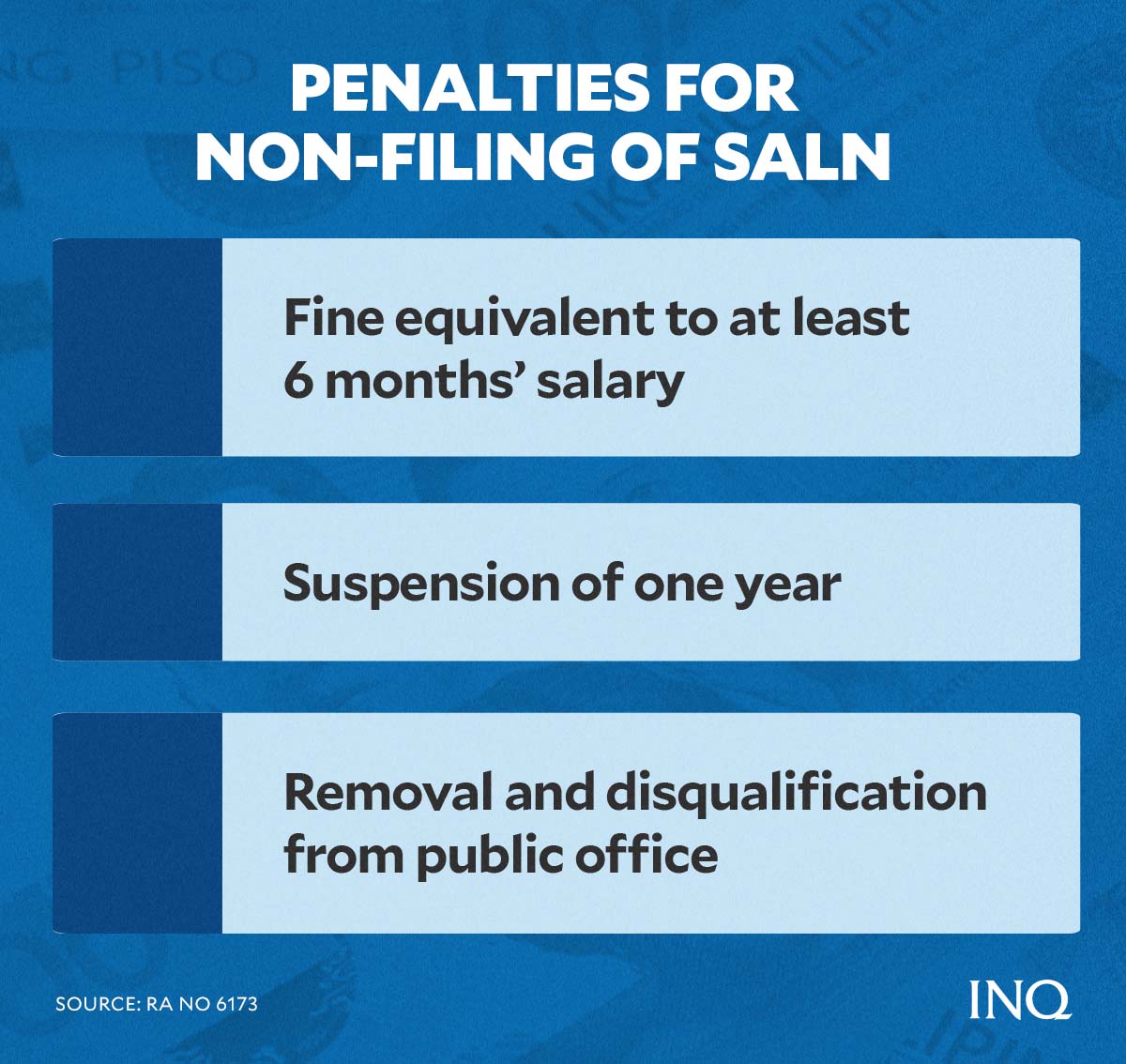 Failure to submit the SALN or misdeclaration of information in the SALN constitutes a violation of RA 6713.

Erring employees or officials could be punished with a fine equivalent to not more than six months’ salary or suspension not exceeding one year, or removal from the service—depending on the gravity of the offense. 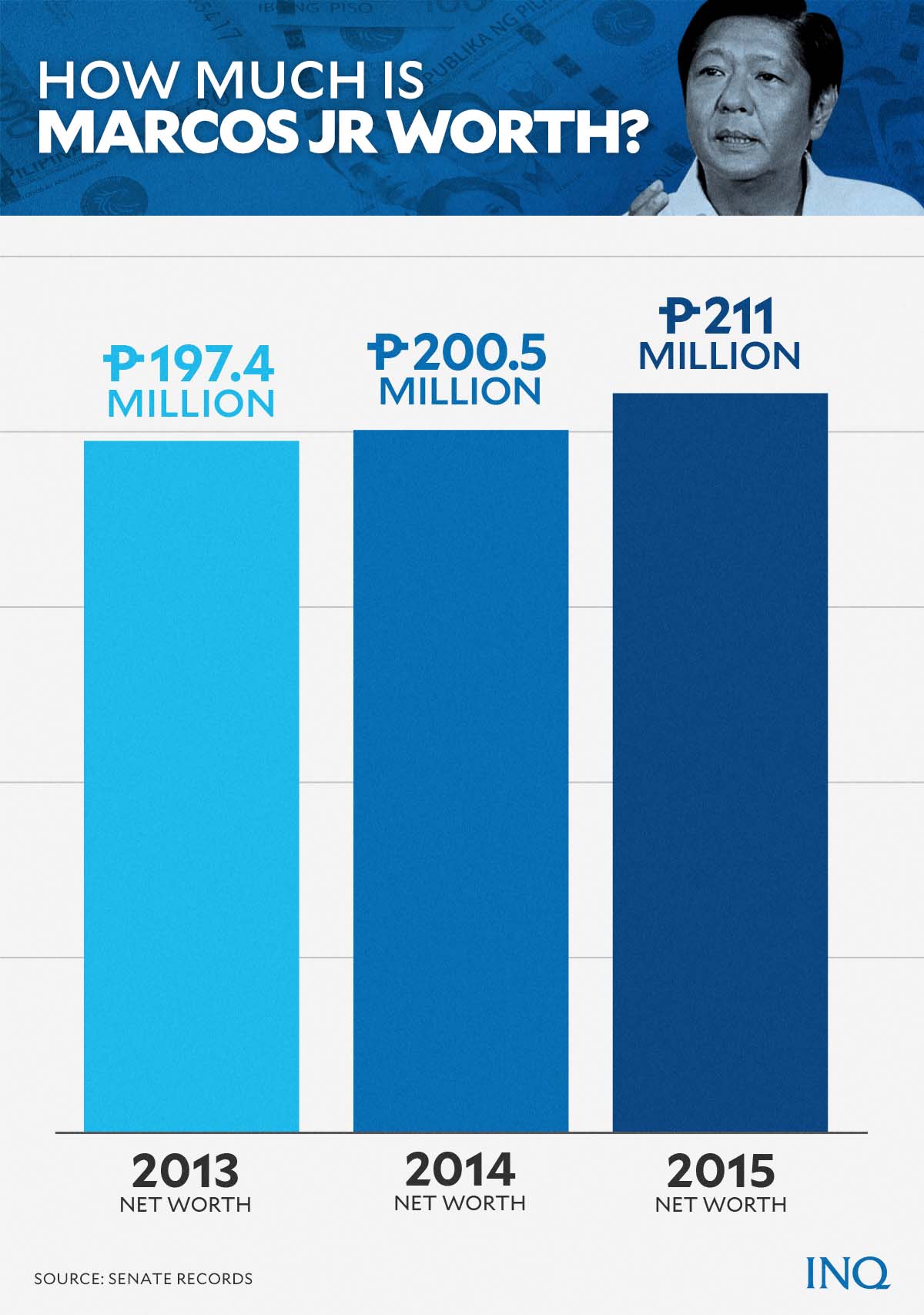 Violations in the SALN filing are also punishable with imprisonment not exceeding five years or a fine not exceeding P5,000 or both at the discretion of the court.

Why is it important to be made public?

Section 8 of Republic Act No. 6173 stated that “the public has the right to know” the SALNs of public officials and employees.

The law said that SALNs must be made accessible for inspection at reasonable hours and must be available to the public for 10 years from receipt of the record. 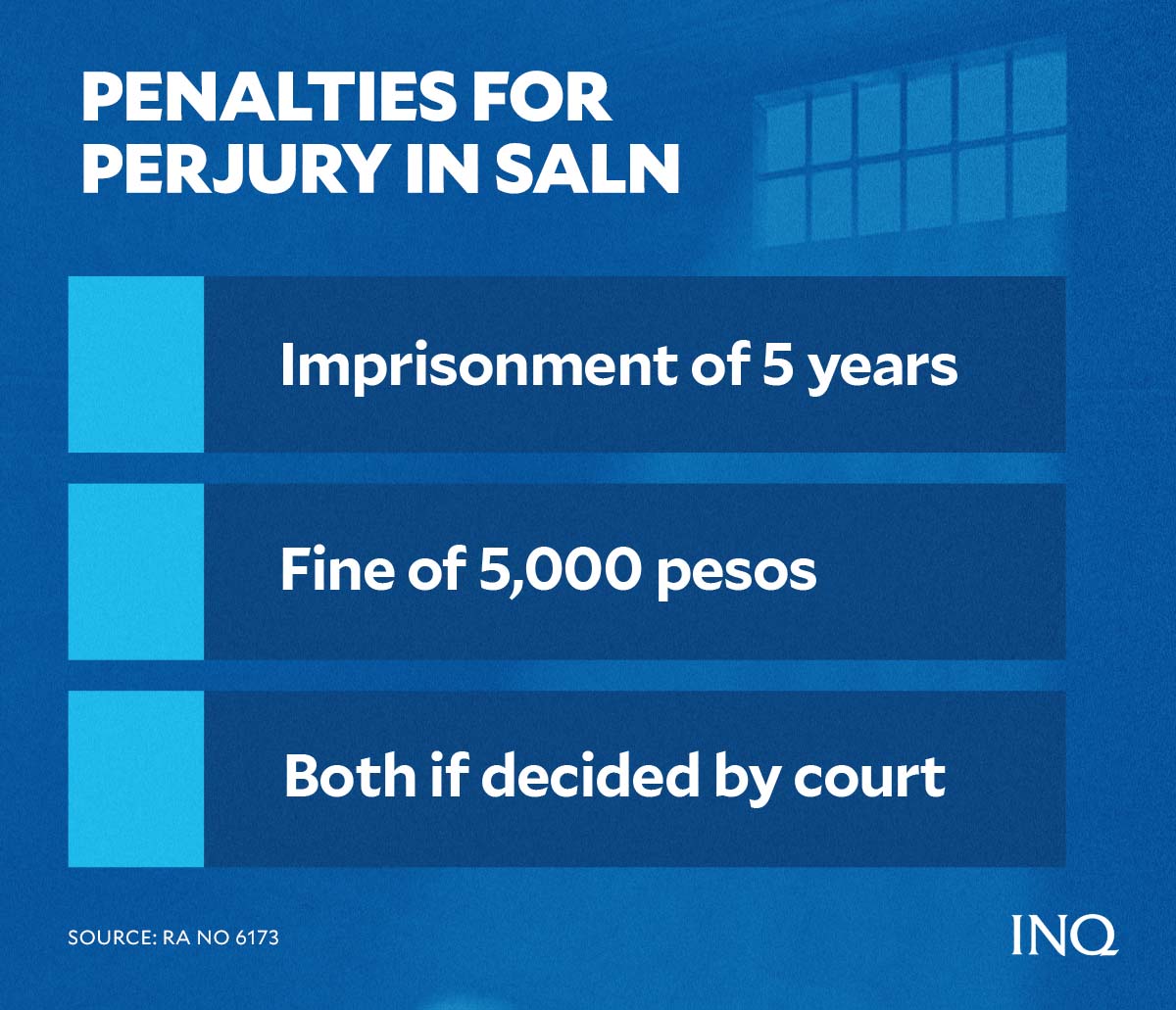 “Any person requesting a copy of a statement shall be required to pay a reasonable fee to cover the cost of reproduction and mailing of such statement, as well as the cost of certification,” the law stated.

“Any statement filed under this Act shall be available to the public for a period of ten (10) years after receipt of the statement. After such period, the statement may be destroyed unless needed in an ongoing investigation,” it added.

In September 2020, Martires issued new guidelines on who can obtain copies of government officials’ SALNS, limiting these to the official himself and officers conducting investigations.

In the old guidelines, the general public, media, and students may request SALNs from the Ombudsman — as long as they submit a properly filled out form and other necessary identification documents.

Memo Circular No. 1 meanwhile stated that SALNs would be released only when:

The memorandum also explained that government agencies cannot seek a copy of the SALN if the request is not supported by a notarized letter of authority from the official who filed it.

“To protect the right to privacy of the declarant whose SALN was the subject of a request, all SALN request forms shall be treated as part of the public record,” the memo said.

“All requests by government agencies for the SALNs of their officials and employees for any purpose shall be denied unless the request form is supported by the declarant’s notarized letter of authority,” the memo said.

“Except for the payment of the fees, the agency will be required to observe the above procedure in requesting the SALN,” it added.