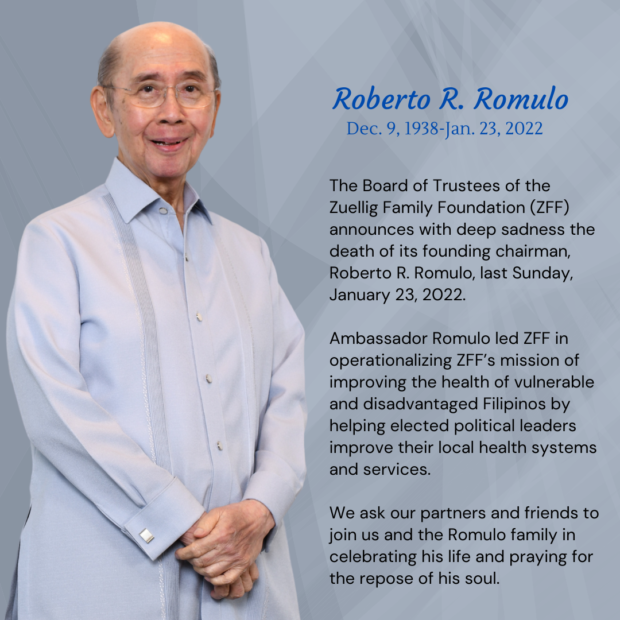 In a text message to INQUIRER.net,  Romulo’s niece and Tourism Secretary Bernadette Romulo-Puyat confirmed reports about the demise of her uncle,  son of the late statesman and United Nations General Assembly President Carlos P. Romulo.

The board of trustees of the Zuellig Family Foundation (ZFF) also announced the death of Romulo, who was the foundation’s founding chairman.

“The Board of Trustees of the Zuellig Family Foundation announces with deep sadness the death of its founding chairman, Roberto R. Romulo, last Sunday, January 23, 2022,” ZFF said in a statement on their website.

“Ambassador Romulo led ZFF in operationalizing ZFF’s mission of improving the health of vulnerable and disadvantaged Filipinos by helping elected political leaders improve their local health systems and services.  We ask our partners and friends to join us and the Romulo family in celebrating his life and praying for the repose of his soul,” he added.

According to the Carlos P. Romulo Foundation, Romulo has been a prominent figure in the country’s private sector, joining several well-reputable companies either as board members or chairperson of groups.

He then joined the government in 1989 after he was appointed ambassador to Belgium, Luxembourg, and then the Commission of the European Communities.

He became a DFA secretary under the term of former president Fidel V. Ramos.