Clashes as tens of thousands protest COVID-19 rules in Belgium 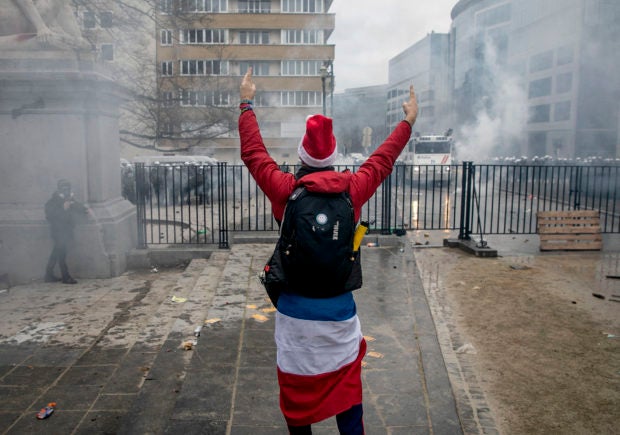 A protestor rises his hands in front of police forces during a demonstration for “freedom, democracy and human rights” organised by the alliance Europeans United in Brussels, on January 23, 2022, to protest against the measures imposed by public authorities in Belgium and other European countries to fight the covid pandemic. – Recent days in Belgium figures of the number of people getting infected with the omicron variant have been peaking, reaching new record amounts every day. (Photo by HATIM KAGHAT / Belga / AFP) / Belgium OUT

Authorities estimated that around 50,000 people paraded through the Belgian capital — the largest in a spate of protests in the city over the past months.

Clashes broke out close to the headquarters of the European Union as police used water cannon and tear gas to push back hundreds of protesters who hurled paving stones and firecrackers.

Officers were later forced to seek shelter in a metro station as they were pelted with metal barriers.

Police said that around 70 people were arrested, including a dozen for more serious offenses including throwing projectiles and damaging property.

Three officers and 12 demonstrators were hospitalized, but none were in a life-threatening condition.

“Freedom of expression is one of the foundations of our society. Everyone is free to express their opinion,” Belgium’s Prime Minister Alexander De Croo said in a statement.

“But our society will never accept indiscriminate violence, and even less towards our police forces. Those involved this Sunday will be prosecuted.”

Brussels City mayor Philippe Close tweeted that it had been a “difficult day”.

“Nothing can justify the physical attacks of which the police have been victims,” he wrote.

The protest came as the Omicron wave causes infections to reach record highs across Europe.

Organizers including the World Wide Demonstration for Freedom and Europeans United for Freedom had called for people to come from other EU states.

Flags from Poland, the Netherlands, France and Romania could be seen in the crowd.

“What has been happening since 2020 has allowed people to wake up to corruption,” said Francesca Fanara, who had travelled from Lille in northern France,

“I have come to march together.”

“It warms the heart to see these people here.”

Belgium has seen daily infections surge to over 60,000 in the past week in what authorities have called a “tsunami”.

But the milder variant and high rate of vaccination — including people getting a third booster jab — means that health systems have not come under the same strain as during earlier waves.

De Croo on Friday announced that restaurants and bars could extend their opening hours — although nightclubs still remain closed.

Neighboring France has said it will begin a gradual lifting of Covid restrictions from February 2 after authorities said there were “encouraging signs” that the wave of infections due to the Omicron variant was ebbing.