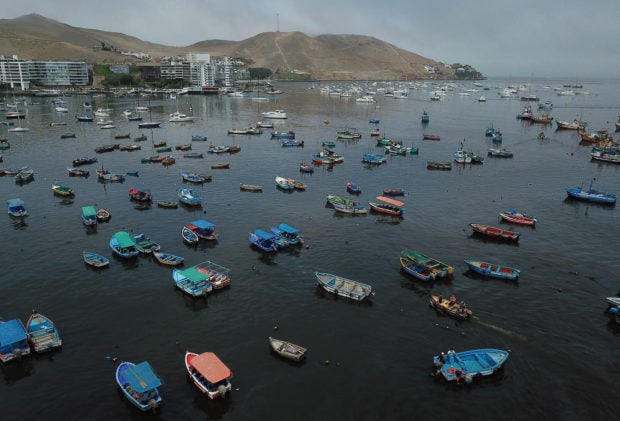 Aerial view of moored fishing boats, days after an oil spill that affected the resort town of Ancon, Peru, on January 21, 2022. – At Miramar Beach in Peru’s popular resort of Ancon, there are no bathers despite the summer heat. Instead, it teems with workers in coveralls cleaning up an oil spill. Almost a million liters (264,000 gallons) of crude spilled into the sea on Saturday when a tanker was hit by waves while offloading at La Pampilla refinery in Ventanilla, 30 kilometers (19 miles) north of Lima. (Photo by Cris BOURONCLE / AFP)

ANCON, Peru — Thousands of barrels of crude oil that were spilled off Peru’s central coast have taken a grim toll: dead birds adrift in the sea and irate fishermen stuck on the docks.

Some 6,000 barrels poured into the sea as an oil tanker unloaded a week ago at the La Pampilla refinery located some 30 kilometers (19 miles) north of Lima.

According to Spanish oil company Repsol, which owns the refinery, the accident occurred due to freak waves caused by the volcanic eruption in Tonga.

For fisherman Bernardo Espinoza, the disaster couldn’t have come at a worse time.

“Right in the middle of high season they have gone and basically cut off our arms,” Espinoza told AFP uneasily, noting that he and his colleagues were unable to work in the middle of the southern hemisphere’s summer, when they traditionally sell the most fish.

“We can’t work… we already are using up the last of our savings,” added Espinoza, a fisherman for 50 years in Ancon Bay, 45 kilometers north of Lima.

The government declared an “environmental emergency” for 90 days on Saturday in the “damaged coastal marine area” affected by the spill, which is drifting north.

Currents spread the oil along the coast more than 40 kilometers from the refinery, tarring 21 beaches, according to the Ministry of Health, which recommended people avoid the areas because they are classified as “unhealthy.”

White-suited emergency workers have taken the usual place of weekend beachgoers in Ancon and other nearby coastal towns.

AFP observed enormous oil stains on the ocean surface and dead birds floating in the water on a tour of Ancon Bay aboard the “Rey de Petita” boat, which before the spill took tourists for rides.

“They have attacked the wildlife and our lives, and our jobs — what the fisherman is,” said a distraught Rodney Vasquez, 30, the captain of the small boat, who has lived his entire life near the sea and is the son of a fisherman

At his side, fisherman Alfredo Roque indicated that the difficulties for fishing in the area would last a long time.

Baby fish “are already dead; the young, most of them eat on the seashore, and the seashore is full of oil,” he told AFP.

In addition to those in the fishing industry, people who work in jobs linked to the beaches were also left without income: from restaurant owners and employees, to people who rent out beach umbrellas and those who sell food and soft drinks along the shore.

On the Ancon dock, only the crew members of larger vessels that fish on the high seas continued to work, while the fish stalls were empty, because there are no longer any customers.

“Nothing is selling at all… the fish more than anything comes out with the smell of oil, and people don’t buy it, they don’t eat it because they are afraid of getting poisoned by it, by the oil spill,” said Giovana Rugel, 52, who sells fish at the entrance to the Ancon pier.

Now the only people along Ancon and other beaches are the emergency crews, made up of soldiers, personnel hired by the oil company and volunteers from non-governmental organizations.

Repsol said it was not responsible for the spill, since the Peruvian maritime authorities did not issue warnings about a possible increase in the waves after the eruption in Tonga.

The emergency crews in white biosafety suits and latex gloves use shovels to remove the oily sand, which is then trucked to toxic waste dumps.

The massive cleanup is being painstakingly carried out by hand; nobody knows when the cleanup will end.

Peru on Wednesday demanded that Repsol “compensate” for the damage caused by the spill.

The company was given a 10-day timeline to complete all cleanup and decontamination actions.

Under the environmental emergency declaration, authorities believe that “sustainable management of the affected territories” can be carried out, with the respective “recovery and remediation work” mitigating environmental contamination.

The spill occurred during the unloading process of the Italian-flagged tanker “Mare Doricum,” whose departure has been prohibited by the Peruvian government until bail of some $39 million is presented or until an investigation into the spill is complete.