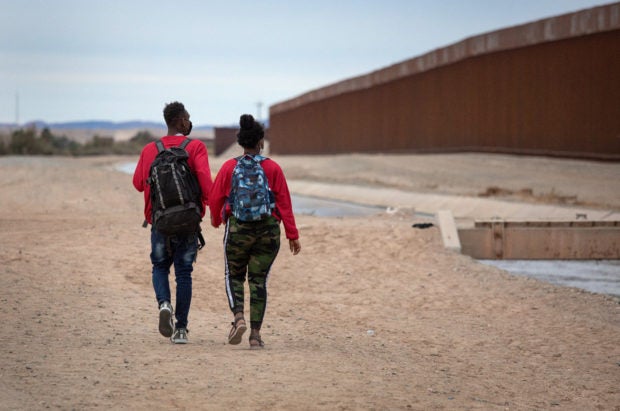 YUMA, ARIZONA – DECEMBER 10: An immigrant couple from Haiti walks from Mexico into the United States on December 10, 2021 in Yuma, Arizona. The had made the arduous journey from Brazil in South America. Yuma has seen a surge of migrant crossings in the past week, with many immigrants trying to reach U.S. soil before the court-ordered re-implementation of the Trump-era “Remain in Mexico” policy. The policy requires asylum seekers to stay in Mexico during their U.S. immigration court process. John Moore/Getty Images/AFP (Photo by JOHN MOORE / GETTY IMAGES NORTH AMERICA / Getty Images via AFP)

CIUDAD JUÁREZ, Mexico — As they linger, trapped at the US-Mexico border, the young Nicaraguan man and Guatemalan woman say it is love that has helped them hang on to their American dream despite the pain of a long, anxious wait.

“I used to tell her, one day you’re going to be my family and you’re going to be the mother of my children,” 29-year-old Jose Luis Alvarado recalled about his flirtation with Wendy Espana in the Pan de Vida (Bread of Life) migrant shelter in the Mexican border city of Juarez.

Both had been expelled from the United States along with more than 71,000 other asylum seekers after then-president Donald Trump in January 2019 issued an order — known as the Migrant Protection Protocols, or MPP — forcing them to wait in Mexico while their US applications are processed.

Most of those deported returned to their home countries, but thousands remained at the border.

Alvarado had left Nicaragua, where he was a military nurse, after being persecuted for political reasons, he said, while Espana said that she fled Guatemala after receiving death threats from a criminal group.

The cheerful young Nicaraguan said he had to persuade Espana that he was not “playing with her.”

She took some convincing.

It took time, added Alvarado, but “we bonded and got to know each other better.”

Eventually they moved in together, turning a space in a warehouse into their home. And there it was that Espana gave birth to their daughter, Danna, now one year old.

Once in the White House, Joe Biden ended the MPP, allowing more than 13,000 migrants to enter the United States legally between February and August 2021. The move was supported by the UN High Commissioner for Refugees (UNHCR).

But when the case reached the US Supreme Court, Biden was ordered to restore the MPP. The program, widely denounced abroad, resumed in December, indefinitely halting the legal entry of asylum applicants.

Espana and Alvarado are now among nearly 3,000 applicants who have registered for asylum but remain blocked in Mexico by the high court ruling.

Alvarado had been on the point of entering the country but held back, urged by a UNHCR advisor to wait three weeks in order for Espana and Danna to accompany him.

But that never happened.

With their applications bogged down in a huge backlog of paperwork, the young couple grew increasingly concerned.

“Unfortunately,” said Alvarado, “the United States does not open its doors to let us even see what our status is.”

In the shelter, other migrants deported since 2019 are also still waiting.

One of them is Santos Felipe Salmeron, 44, who after fleeing gang violence in El Salvador and being deported to Mexico was kidnapped — and missed his asylum hearing.

The traumatic memory still brings him to tears.

None of the three migrants has been able to find their file on the relevant US government website since the MPP was reinstated.

More than 190,000 undocumented migrants were counted in Mexico through the first nine months of 2021, triple the 2020 level.

But amid all the uncertainty, love can provide a balm.

This week, Espana and Alvarado shared their happiness with other migrants at a festive barbecue marking the arrival of their official marriage certificate, following a civil ceremony on January 6.

Alvarado’s wife and daughter now give him reason to hold on to his American dream.

“I always said, ‘I’m coming alone.’ But now I have two women,” he said proudly.

For an emotional Espana, her husband and especially Danna are “a blessing.”

“It’s my dearest desire to get up every day, to move forward and fight for that dream of going to the United States,” she says.