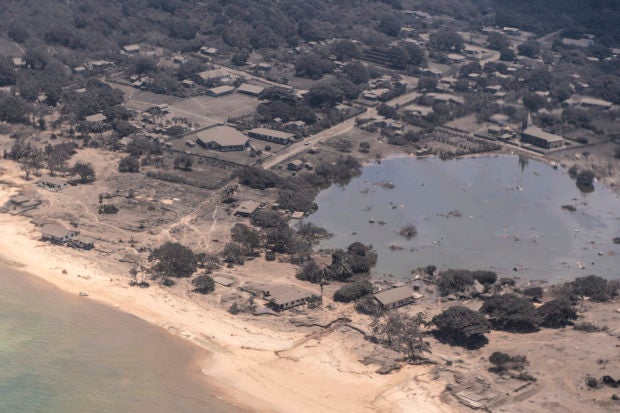 This handout photo taken on January 17, 2022 and received on January 18 from the New Zealand Defence Force shows a view from a P-3K2 Orion aircraft of an area covered in volcanic ash in Tonga, after the eruption of the Hunga-Tonga – Hunga-Haa’pai volcano on January 15. (Photo by Handout / NEW ZEALAND DEFENCE FORCE / AFP)

WELLINGTON — Tongans raced Wednesday to clear a thick coat of ash from the main international runway to let in emergency aid, as the island nation faced a month of crippled international communications following a violent volcanic eruption and tsunami.

The Hunga Tonga-Hunga Ha’apai volcano erupted 30 kilometers (19 miles) into the air on Saturday sending ash, gas and acid rain across a large area of the Pacific.

It released an enormous pressure wave that traversed the planet, traveling at supersonic speed at about 1,231 kilometers per hour (764 miles per hour), New Zealand’s National Institute of Water and Atmospheric Research said.

In the tsunami that followed, waves in Tonga rose up to 15 meters (50 feet) in some areas, the small Pacific island nation’s government said in a statement.

Three people were killed and “a number” were injured, the Tongan government said, calling the volcano explosion “an unprecedented disaster.”

Australia and New Zealand have military transport C-130 aircraft ready to fly when ash has been removed from the main island.

Ash particles pose a threat to modern jet aircraft, including by melting and accumulating in the engines.

A thicker-than-expected blanket of five to 10 centimeters (two to four inches) of ash had accumulated on the main island Tongatapu’s runway, the UN Office for the Coordination of Humanitarian Affairs (OCHA) said. It expected the runway to be clear soon.

“The ash has proven more difficult to clear than was expected,” said Jonathan Veitch, Fiji-based UN coordinator on the crisis.

“We thought that it would be operational yesterday, but it hasn’t been fully cleared yet because more ash has been falling,” he said Tuesday.

“They clear about 100 or 200 meters per day, I gather. Which means they should get there today.”

“We will provide whatever is required and anything is asked of us,” Australian Defense Minister Peter Dutton told reporters.

New Zealand’s HMNZS Wellington, equipped with survey and diving teams, and HMNZS Aotearoa with bulk water supplies and a 70,000-liter a day onboard desalination plant, departed on a trip of some three days Tuesday.

Tonga has been virtually cut off from the outside world since the volcanic blast broke an undersea communications cable, which may remain severed for weeks.

The outside world has been relying on patchy satellite phone connections, surveillance flights and satellite images to measure the full scale of the disaster.

Tonga’s government said the tsunami completely wiped out one village while only a few houses remained standing in several other settlements scattered across the archipelago.

The village on Mango island, where a distress beacon was detected earlier in the week, was completely destroyed while only a few houses remained standing in several other villages scattered through the archipelago.

“An unprecedented disaster hit Tonga,” the government said in its first public declaration since the eruption.

Rescue teams had been sent to the worst-hit areas to evacuate residents, it said.

A 65-year-old woman in Mango was one of three people confirmed dead along with a 49-year-old man and British national Angela Glover.

Tongan navy vessels carrying health workers and laden with urgent supplies of water, food and tents were being deployed.

“The evacuation process has begun,” the government statement said.

Latest satellite photos released by the UN showed vast areas covered in ash, and evidence of inundated roads, toppled walls and smashed buildings in areas scattered across the archipelago.

Satellite images released by Maxar Technologies on Tuesday showed that where most of the volcanic structure stood above sea level a few days ago, there is now just open sea.

Only two relatively small volcanic islands were still visible above sea level after the eruption.

The World Health Organization said the ash and dust were “raising concerns of air pollution and potential contamination of food & water supplies”.

The government had advised the public to remain indoors, use masks if going out and to drink bottled water due to the ashfall, it said.

Even when relief efforts get under way, they may be complicated by Covid-19 entry restrictions.

The eruption — one of the largest in decades — was recorded around the world and heard as far away as Alaska, triggering a tsunami that flooded Pacific coastlines from Japan to the United States.