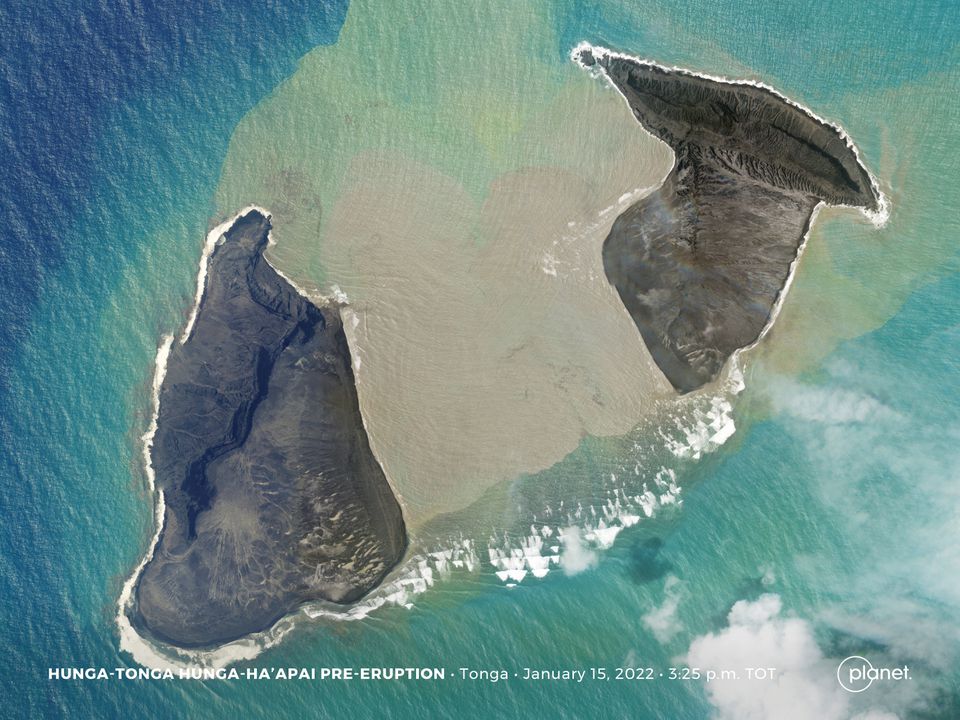 WELLINGTON — A volcano that exploded in the Pacific island nation of Tonga has almost disappeared from view, new images revealed Tuesday, with swathes of the country smothered in grey dust or damaged by a tsunami.

The volcano erupted 30 kilometers (19 miles) into the air on Saturday and deposited ash, gas and acid rain across a large area of the Pacific.

In the tsunami that followed, waves in Tonga rose up to 15 meters (50 feet), its government said in a statement.

Three people were killed and “a number” were injured, the government said on Twitter, calling the volcano explosion “an unprecedented disaster.”

Three days after the eruption, the outside world is still struggling to understand the scale of the damage using patchy satellite phone connections, surveillance flights and satellite images.

While power and local phone systems have been partially restored, international communications remain severed and the internet is down.

Satellite images released by Maxar Technologies on Tuesday showed that where most of the volcanic structure stood above sea level a few days ago, there is now just open sea.

Only two relatively small volcanic islands were still visible above sea level after the eruption.

New Zealand released aerial images taken from a surveillance flight the previous day, revealing a tree-lined coast transformed from green to grey by the volcanic fallout.

Wrecked buildings were visible on the foreshore alongside others that appeared intact.

Shipping containers had been knocked over like dominoes at a port on the main island.

The World Health Organization said in a statement Tuesday that its liaison officer in Tonga, Dr Yutaro Setoya, was “channelling communication between UN agencies and the Tongan government”.

“With international phone lines and internet connectivity still down, Dr Setoya’s satellite phone is one of the few ways to get information,” it said.

The officer has “literally been standing outside from dawn until long into the night for the past few days to ensure that the phone can reach the satellite signal”, said the WHO’s Health Cluster Coordinator for the Pacific, Sean Casey.

The UN health agency said around 100 houses had been damaged, with 50 destroyed on Tonga’s main island of Tongatapu.

Between five and 10 centimeters of ash and dust had fallen on Tongatapu, the UN said.

Water supplies “have been seriously affected by the volcanic ash,” the government said in a statement.

The WHO said the ash and dust were “raising concerns of air pollution and potential contamination of food & water supplies”.

“The gov’t has advised the public to remain indoors, use masks if going out & to drink bottled water due to the ashfall,” according to WHO.

Australia’s HMAS Adelaide and New Zealand’s HMNZS Wellington and HMNZS Aotearoa were ordered to be ready for a possible aid request from Tonga, which lies three to five days’ sailing away.

The Red Cross said it was sending 2,516 water containers.

France, which has territories in the South Pacific, pledged to help the people of Tonga’s “most urgent needs”.

The UN Office for the Coordination of Humanitarian Affairs (OCHA) said a signal had been detected from a distress beacon on a low-lying island, Mango.

The agency said surveillance flights had confirmed “substantial property damage” on Mango, home to about 30 people, and another island, Fonoi.

Images released by the United Nations Satellite Centre showed the impact of the disaster on the island of Nomuka, one of the closest to the Hunga-Tonga-Hunga-Ha’apai volcano.

The satellite center said that of 104 structures analyzed in a cloud-free area, 41 structures were damaged.

The government has begun evacuating the affected areas, according to its statement.

Tonga’s airport was working to remove volcanic ash from the capital’s runway. Australia said the ash must be cleared before it can land a C-130 military plane with aid.

One of the three people confirmed dead was Briton Angela Glover, a 50-year-old who ran a stray animals charity and was reported missing by her husband after the tsunami hit.

“Earlier today my family was sadly informed that the body of my sister Angela has been found,” her brother Nick Eleini said after being given the news by the husband, James Glover.

“James was able to cling on to a tree for quite a long time, but Angela was unable to do so and was washed away with the dogs,” he told The Guardian newspaper.

A 65-year-old woman from Mango and 49-year-old man from Nomuka island were also killed.

Even when relief efforts get under way, they may be complicated by Covid-19 entry restrictions.

The eruption — one of the largest in decades — was recorded around the world and heard as far away as Alaska, triggering a tsunami that flooded Pacific coastlines from Japan to the United States.

In Peru, authorities sealed off three beaches Monday after they were hit by an oil spill blamed on freak waves caused by the eruption.

The blast severed an undersea communications cable between Tonga and Fiji that operators said would take up to two weeks to repair.