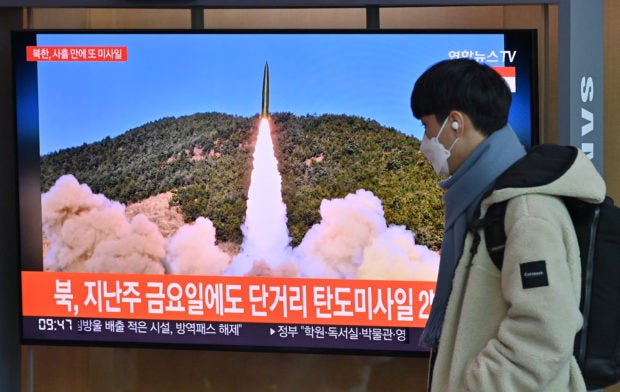 A man walks past a television screen showing a news broadcast with file footage of a North Korean missile test, at a railway station in Seoul on January 17, 2022, after North Korea fired an unidentified projectile eastward in the country’s fourth suspected weapons test this month according to the South’s military. (Photo by Jung Yeon-je / AFP)

Despite biting international sanctions, Pyongyang has conducted a string of weapons tests this year, including of hypersonic missiles, as leader Kim Jong Un pursues his avowed goal of further strengthening the military.

Reeling economically from a self-imposed coronavirus blockade, impoverished North Korea has not responded to Washington’s offers of talks, while doubling down on weapons tests and vowing a “stronger and certain” response to any attempts to rein it in.

The launches come at a delicate time in the region, with North Korea’s sole major ally China set to host the Winter Olympics next month and South Korea gearing up for a presidential election in March.

The state news agency KCNA said Tuesday: “The two tactical guided missiles launched in the western area of the DPRK precisely hit an island target in the East Sea of Korea.” DPRK stands for the Democratic People’s Republic of Korea.

“The Academy of Defence Science confirmed the accuracy, security and efficiency of the operation of the weapon system under production,” KCNA said.

This latest test was first reported by the South Korean military’s Joint Chiefs of Staff as well as Japan.

In response, the United States called on North Korea Monday to “cease its unlawful and destabilizing activities.”

In a call with South Korean and Japanese officials, the US special representative on North Korea, Sung Kim, “expressed concern” about the missile launches and urged Pyongyang to return to dialogue “without preconditions,” the State Department said.