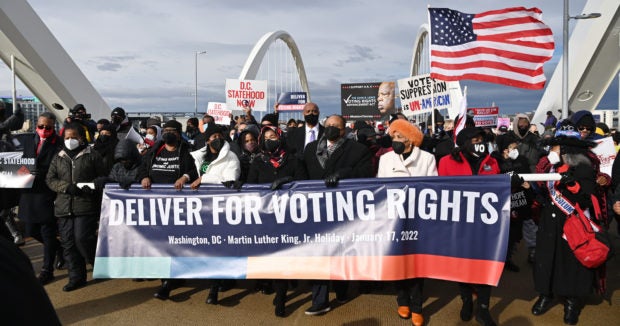 King’s son Martin Luther King III spoke at the march, warning that many states “have passed laws that make it harder to vote” more than half a century after the activism of his father.

The march’s message was aimed at boosting support for the Freedom to Vote Act currently before the Senate, and which passed in the House of Representatives last week.

But the bill faces an uphill battle as President Joe Biden negotiates with two holdout senators in his own Democratic Party to change a procedural rule that would allow Congress to pass the law without Republican support.

Biden argues the bill is vital to protecting American democracy against Republican attempts to exclude Black and other predominantly Democratic voters through a spate of recently enacted laws at state and local levels.

Marchers at Monday’s Peace Walk echoed demands made by MLK more than 60 years ago as they chanted, “What do we want? Voting rights! When do we want it? Now!”

Many carried posters printed with King’s image and his famous 1957 appeal to “Give us the ballot,” which called on the federal government to enforce Black Americans’ right to vote nationwide, including in the heavily segregated South.

“We march because our voting rights are under attack right now,” pastor Reverend Wendy Hamilton told AFP at the demonstration.

“As a matter of fact, our democracy is very fragile,” said Hamilton, a local politician in Washington, whose residents themselves do not have full representation in Congress.

House Speaker Nancy Pelosi and members of the Congressional Black Caucus, such as Terri Sewell from Alabama and chairwoman Joyce Beatty from Ohio, also spoke at the march — as did King’s 13-year-old granddaughter Yolanda Renee King.

King’s daughter Bernice King also took to the social media platform to call for the Senate to pass voting reform.

“If these state voter suppression laws persist, the America my father dreamed about will never come to be,” she wrote.

At the White House, Vice President Kamala Harris urged senators to pass the Freedom to Vote Act in honor of King’s legacy.

King “pushed for racial justice, for economic justice and for the freedom that unlocks all others: the freedom to vote,” she said.

She denounced bills under consideration or already passed in state legislatures that she said could make it harder for 55 million Americans to cast ballots.

“To truly honor the legacy of the man we celebrate today, we must continue to fight for the freedom to vote, for freedom for all,” Harris said.

Biden and Harris last week visited the crypt where King — who was assassinated in 1968 at age 39 — and his wife, Coretta Scott King, are buried in Atlanta.