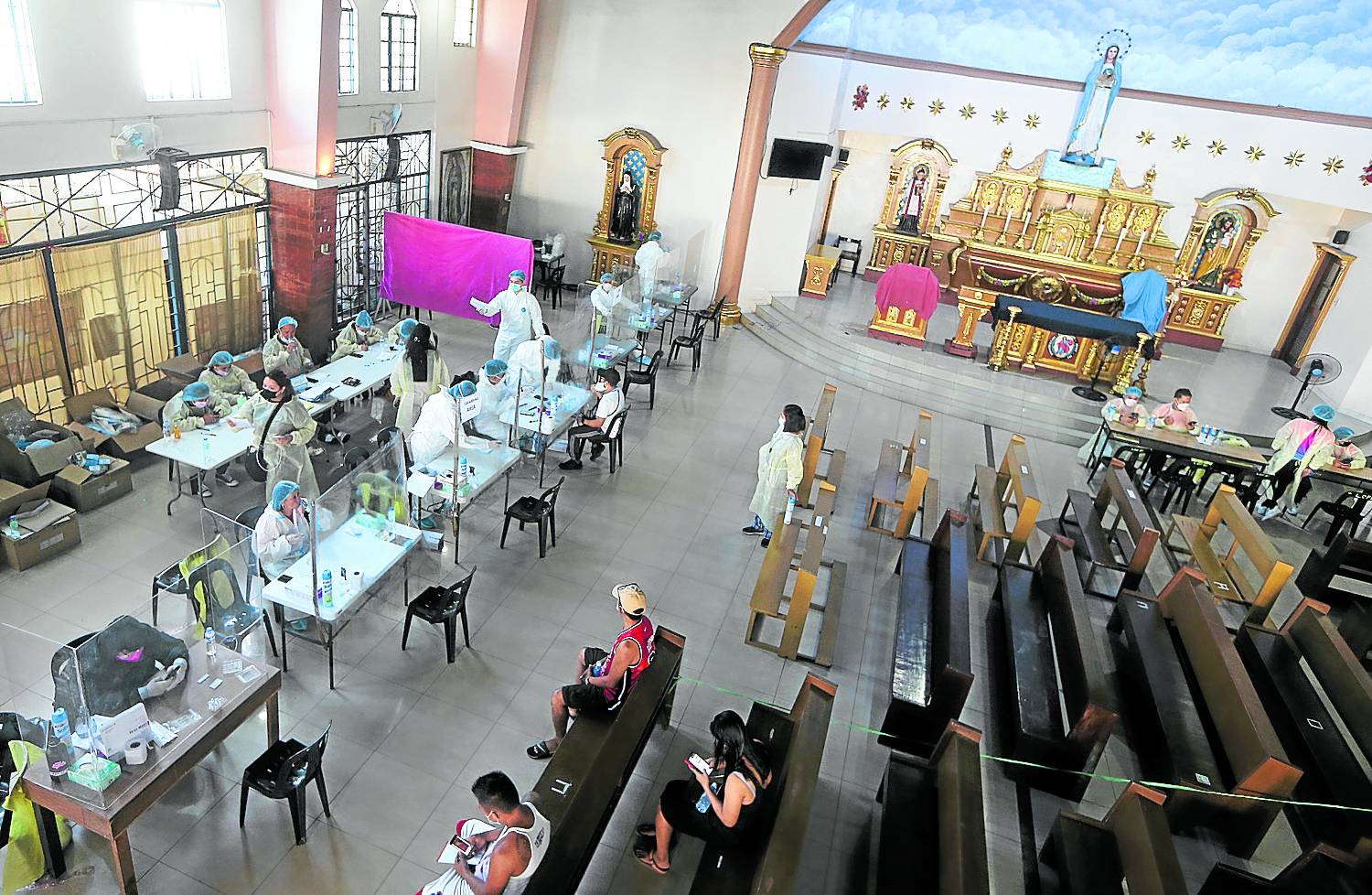 SWAB AND PRAY A section of Ina ng Lupang Pangako Parish church in Barangay Payatas, Quezon City, serves as a COVID-19 antigen testing center on Wednesday through the “Swab Cab” initiative of the Office of the Vice President. —NIÑO JESUS ORBETA

The Department of Health (DOH) is shifting its policies to better deal with the fast-spreading Omicron variant of the coronavirus, lowering the priority for contact tracing but raising it for testing people most vulnerable to COVID-19, officials said on Thursday.

Health Undersecretary Maria Rosario Vergeire explained in an online briefing that contact tracing was “not that much prioritized anymore” because of the “very high” likelihood that Filipino households now had at least one member positive for COVID-19.

In an interview with CNN Philippines, Health Secretary Francisco Duque III said it was impractical to do contact tracing when there is widespread and sustained community transmission.

“You’ll be wasting a lot of resources doing contact tracing when you know the cases are already on an upswing, accelerating, and more and more communities are being infected,” Duque said.

“Now, it’s very difficult to contact trace everyone,” he said. “The infection rate is quite high and Omicron is pretty established to be highly transmissible, more than Delta and the other COVID-19 variants.”

Socioeconomic Planning Secretary Karl Kendrick Chua said that from an economic point of view, he saw the need to find the best use for limited resources under new conditions.

“My understanding is that the situation, where the virus spreads very fast, warrants better and more efficient use of scarce resources—for instance, to vaccination, hospital care, etc.,” he told the Inquirer.

But the head of the state planning agency National Economic and Development Authority said contact tracing was still necessary.

“One would like to know who brought the virus to the office or classroom, and how to manage as needed,” Chua said.

Chua had said that Filipinos must learn to live with COVID-19 like the common cold or flu so they won’t fear going out to work and spending in order to revive the economy, which shed millions of jobs at the height of the lockdown in 2020.

Duque said the contact tracers hired by the government could be deployed to other “high impact” activities like monitoring individuals or families in isolation or quarantine, “symptom monitoring” and helping the vaccination drive.

They can also help in information and education campaigns to improve public compliance with minimum public health standards.

While lowering the priority for contact tracing, the DOH was raising it for testing health-care workers, senior citizens and persons with comorbidities.

Vergeire said the DOH would no longer recommend tests for people who show no symptoms after close contact with a confirmed COVID-19 case “so we can reserve our testing resources for those who really need it.”

She said people above 60 years old or those with comorbidities who tested positive for COVID-19 could be provided with medicines or antivirals within the first five days of their symptoms.

Instead of testing in communities, symptom monitoring is recommended and isolation will be prioritized, she added.

Dr. Rabindra Abeyasinghe, the representative of the World Health Organization in the Philippines, said that it would be more prudent to test those who have symptoms, especially vulnerable people.

He said such “targeted testing is a better use of resources” and there was no need for confirm testing of other members of a household with a confirmed case.

“You just need to assume that it’s Omicron, because it’s milder it’s more prudent to just isolate or quarantine as the case may be. They are very likely to get infected or would have already gotten infected,” Abeyasinghe said in a briefing.

The shift in the DOH policy on contact tracing, which wasn’t discarded, triggered opposition and disappointment, and possibly misunderstanding.

“It’s sad. Contact tracing is part of the playbook to control the pandemic,” said Dr. Tony Leachon, a former consultant to the government’s pandemic task force.

“Test, trace, isolate, quarantine. Then, vaccinate and booster,” he said. “Without contact tracing, we will never know those in contact with the infected and we will never stop the viral transmission.”

Baguio City Mayor Benjamin Magalong, who was appointed to lead the government’s national contact tracing effort, said it was “still a critical strategy.”

“It’s the only way to break the chain of transmission,” the former police general told the Inquirer.

Magalong said Vergeire “may have used the wrong phrase when she referred to contact tracing as the least priority.”

He said that during a pandemic, contact tracing and mass testing should be “non-negotiable,” and that government must find ways to accomplish these tasks if it was “dead serious in protecting the economy, including the livelihood of many.”

“Funding should not be an issue, as these can be sourced from unnecessary projects and appropriations, including the President’s confidential and intelligence funds,” Colmenares said.

Undersecretary Jonathan Malaya of the Department of the Interior and Local Government (DILG) said its P500-million funding proposal for hiring contact tracers in the 2022 budget was slashed by half.

The P250 million left would not even be enough to extend the contract of 15,000 contact tracers hired by the DILG out of the 130,178 contact tracers nationwide last year, he said.

The majority of the contact tracers were hired by cities and towns around the country since “contact tracing is a local government function,” Malaya said in an interview with ANC. —WITH REPORTS FROM BEN O. DE VERA, DEXTER CABALZA, NESTOR CORRALES AND VINCENT CABREZA