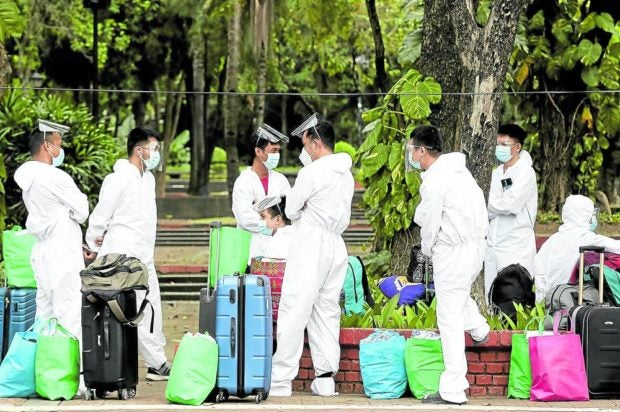 ALMOST HOME Seafarers who recently returned from abroad but had to undergo quarantine are released from the COVID-19 field hospital at Quirino Grandstand, Manila, on Thursday. This group is just waiting for the bus bringing them closer to home. —RICHARD A. REYES

The Department of Health (DOH) on Thursday reported 34,021 COVID-19 cases, the highest single-day tally of infections since the onset of the pandemic two years ago.

This broke the previous highest daily case count of 33,169 reported on Monday.

The DOH case bulletin said about half or 16,793 cases were from Metro Manila, followed by Calabarzon (Cavite, Laguna, Batangas, Rizal and Quezon) with 7,131 cases (21 percent) and Central Luzon with 3,745 (11 percent).

“We will likely see 40,000 new cases soon. But the Omicron wave will take some time because as the NCR reaches its peak, waves are accelerating in other parts of the country (Visayas and Mindanao),” David added.

OCTA Research noted that the cities of Baguio, Angeles and Santiago were on a “mature stage” of the outbreak, recording Adars of 39.48, 26.65 and 25.23, respectively.

The group also reported that other highly urbanized cities such as Naga, Dagupan, Lucena, Olongapo, Iloilo and Lapu-Lapu were on an “accelerating stage” of the Omicron outbreak, while the cities of Cagayan de Oro, Cebu and Davao remained at an early stage of the outbreak.

The DOH reported that the positivity rate on Thursday was 47.9 percent, nearly 10 times the World Health Organization’s benchmark of below 5 percent to indicate that coronavirus transmission is under control.

The positivity rate was based on 78,866 people tested on Tuesday.

The country’s total caseload since the pandemic started was now 3,092,409.

There were seven laboratories that did not submit data to the COVID-19 Document Repository System, according to the DOH.

The country’s treatment czar on Tuesday also expressed confidence that Metro Manila’s health-care system could accommodate those needing hospitalization amid the ongoing COVID-19 surge suspected to be driven by the Omicron variant.

Vega, who also heads the One Hospital Command Center, said that during the Delta variant-driven surge in September last year, the rise in the number of cases came side by side with higher hospital and intensive care unit usage.

This, he said, has not happened this month despite daily cases reaching up to 33,000.

“We can see that the hospitalization rate is on the low-risk category for the whole country and here in Metro Manila, it’s on the borderline between low risk and moderate risk. That is why it’s very manageable this time and it’s really different compared with the last wave that we saw with the Delta variant,” he said.

Vega admitted that while the health-care utilization rate was low risk on the average in Metro Manila, there were cities such as San Juan, Taguig, Marikina and Quezon City that could be categorized as high risk.

However, Vega said the One Hospital Command Center was coordinating with hospitals that were already filling up to transfer some of their patients to other facilities with fewer admitted cases.

Other hospitals are also adopting temporary measures to increase the number of beds for COVID-19 patients by closing some departments and suspending special services and elective surgeries.

Vega said another way to control the spread of the disease was to add more or reopen temporary treatment and monitoring facilities where those with mild and moderate symptoms or asymptomatic could stay.

Asked if there was a need to escalate Metro Manila’s alert level, Vega said he believed current restrictions under the alert level 3 were already working.