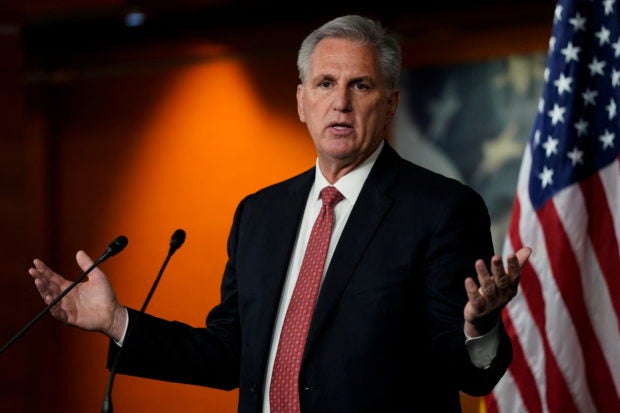 The U.S. congressional committee investigating the deadly Jan. 6, 2021, attack on the Capitol asked House Republican Leader Kevin McCarthy on Wednesday to voluntarily answer questions about Donald Trump’s actions on the day of the riot.

In a letter to McCarthy released publicly, the House of Representatives Select Committee requested he sit for an interview in early February.

McCarthy later issued a written statement saying he would not cooperate with what he described as an “illegitimate” committee.”As a representative and the leader of the minority party, it is with neither regret nor satisfaction that I have concluded to not participate with this select committee’s abuse of power that stains this institution today and will harm it going forward,” McCarthy said in the statement.

The committee is trying to establish Trump’s actions while thousands of his supporters attacked police, vandalized the Capitol and sent members of Congress and then-Vice President Mike Pence running for their lives.

The committee met virtually with Trump’s former White House spokesperson, Kayleigh McEnany, on Wednesday, according to a source familiar with the meeting.

“We also must learn about how the President’s plans for Jan. 6 came together, and all the other ways he attempted to alter the results of the election,” the Select Committee’s chairman, Representative Bennie Thompson, said in the letter to McCarthy.

The committee is also investigating whether Trump suggested to McCarthy what he should say publicly and to investigators about their conversations on the day of the attack, according to the letter.

The panel had previously asked another Trump ally in Congress, Representative Jim Jordan, to disclose conversations he had with Trump on Jan. 6, 2021. Jordan said on Sunday he would not cooperate with the committee’s investigating, also calling it illegitimate.

Two Republicans, Representatives Liz Cheney and Adam Kinzinger, are members of the committee.

Thompson has said the panel is looking into whether it has the authority to issue subpoenas to congressional Republicans to force their cooperation.

The Select Committee has interviewed more than 340 witnesses and issued dozens of subpoenas as it investigates the storming of the Capitol by a mob of Trump supporters as lawmakers were certifying President Joe Biden‘s election victory.

The committee is aiming to release an interim report in the summer and a final report in the fall, a source familiar with the investigation said last month.

The committee’s members have said they will consider passing along evidence of criminal conduct by Trump to the U.S. Justice Department. Such a move, known as a criminal referral, would be largely symbolic but would increase the political pressure on Attorney General Merrick Garland to charge the former president.

One police officer who battled rioters died the day after the attack and four who guarded the Capitol later committed suicide. Four rioters also died, including a woman who was shot by a police officer while trying to climb through a shattered window.