What next for Prince Andrew? US sex assault lawsuit explained 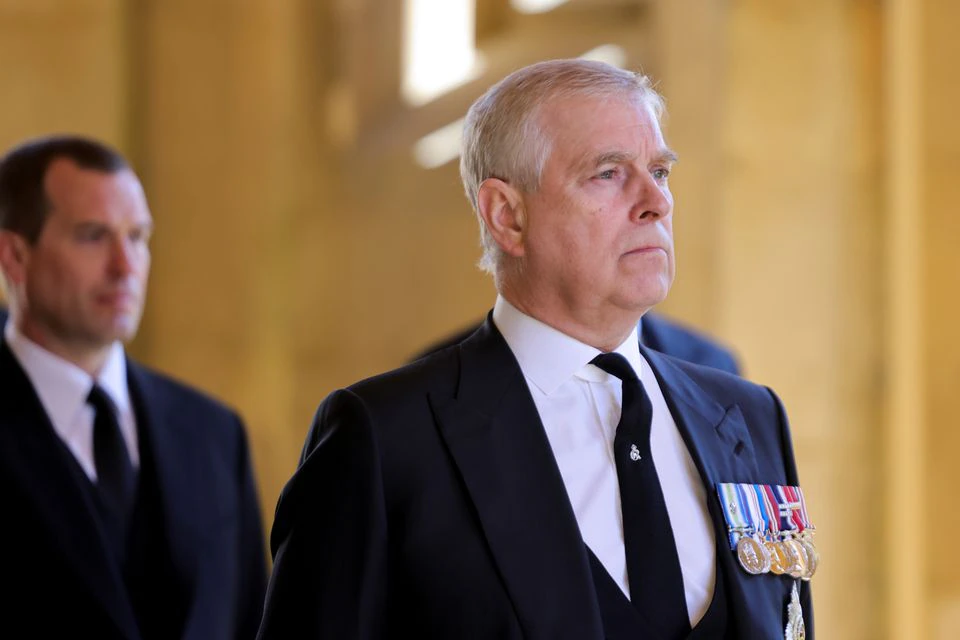 Britain’s Britain’s Prince Andrew, Duke of York, looks on during the funeral of Britain’s Prince Philip, husband of Queen Elizabeth, who died at the age of 99, on the grounds of Windsor Castle in Windsor, Britain, April 17, 2021. | PHOTO: Chris Jackson/Pool via REUTERS

NEW YORK — Britain’s Prince Andrew is stuck between a rock and a hard place: He either settles out of court with his sexual assault accuser or endures a grilling by lawyers under oath, experts say.

After New York judge Lewis Kaplan ruled Wednesday that Virginia Giuffre’s civil lawsuit against the royal can proceed, AFP takes a look at the possible next steps in the case rocking Britain’s monarchy.

Yes. His attorneys can ask the Second Circuit Court of Appeals to overturn Kaplan’s decision.

If that fails then theoretically they could take the case to the US Supreme Court, however legal analysts are skeptical about whether justices would choose to hear it.

An appeal would delay proceedings. The clock is already ticking on the submission of evidence and it would buy Andrew more time.

A deadline of January 14 has been set for the parties to file “letters rogatory,” which are formal requests for assistance from a court in one country to another court in a foreign country.

They are usually filed to obtain evidence from a witness. Giuffre’s attorney, David Boies, said in November that testimony would be sought from two unnamed people in Britain. Kaplan wants to know who all the witnesses are by mid-June.

He has told both sides to complete discovery by July 14. Discovery is the exchanging of information that is to be presented at trial, including emails and text messages, and includes depositions under oath.

Will Andrew have to give evidence?

Once he is deposed he would have to sit down and answer questions by Giuffre’s attorneys. It would likely happen in Britain.

“It’s in a more informal setting than a courtroom but it can be very lengthy, take many, many hours, and it can be aggressive,” former prosecutor Bennett Gershman told AFP.

Andrew’s answers would be submitted as evidence in the event of a jury trial to settle Giuffre’s claim for unspecified damages.

If Andrew was to lie during the deposition then he could subject himself to a later charge of perjury.

How can he get out of testifying?

If the parties reach agreement before the deposition takes place then the case is over and Andrew won’t have to answer questions.

Lawyers for both sides would have to thrash out terms, including how much the prince would pay Giuffre and whether there would be a clause stipulating that the agreement doesn’t mean an admission of guilt.

Will there be a trial?

If Giuffre and Andrew do not settle then the case will proceed to a civil trial that Kaplan has said would likely occur between September and December this year. There, a jury would decide if Andrew owes Giuffre damages.

“If he doesn’t show up, he defaults and if he defaults then a judgment will be lodged against him,” New York attorney Richard Signorelli told AFP.

No criminal charges can directly result from the lawsuit but the suit itself does not stop the government from filing a criminal case against Andrew if they believe a crime has been committed.

Media reports in Britain say Andrew would not have diplomatic immunity but prosecutors believe it would be very difficult to get him extradited to the United States.

Former prosecutor Roger Canaff said he didn’t believe there were “federal grounds” for charges and that the statute of limitations for state charges for the alleged 2001 assault had expired.

“I think it’s time-barred and also just not practical,” he told AFP.