‘We were not late’: Duterte, depleted funds and Odette response

MANILA, Philippines—“We were not late.”

President Rodrigo Duterte made this statement days after Super Typhoon Odette (Rai) made landfall on Dec. 16 to defend his administration’s response to humanitarian needs of survivors.

READ: Government was ‘not late‘ in its Typhoon Odette response, says Duterte

Odette, packing winds nearing 300 kph, added displacement, lack of food, houses and infrastructure in ruins and agricultural produce laid to waste on top of the economic and social scarring still being wrought on regions and provinces with millions of people living below the poverty line even before COVID and Odette struck to make things worse.

While Duterte said government aid reached Odette survivors on the same day or the next day that the super typhoon struck, research group Ibon Foundation said the response was inefficient at the very least.

“The private sector would not have been so compelled to mobilize on such a vast scale in the spirit of bayanihan if the government really had responded early and sufficiently,” said Sonny Africa, executive director of Ibon Foundation. 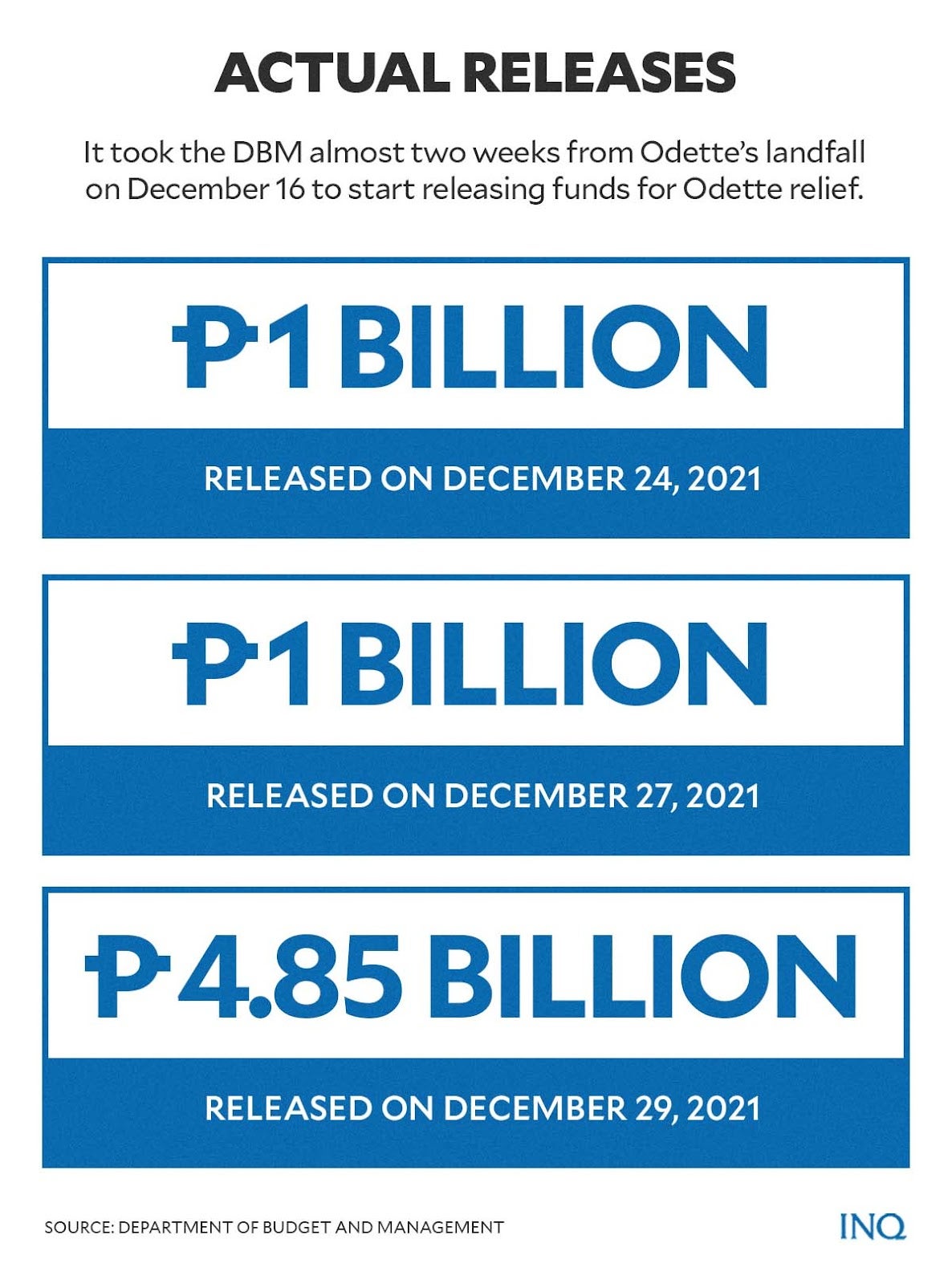 Duterte declared on Jan. 10 that the government was not late in response and delays were because of blocked roads which made certain provinces inaccessible. “Those that were accessible to the Navy had no problems,” he said.

Africa, however, said, this wasn’t the reality. “When Odette hit on Dec. 16, his first reaction of not having resources to respond was wrong,” he told INQUIRER.net.

Last Dec. 17, or a day after Odette’s first landfall, Duterte explained that he was trying to look for resources to help Filipinos hit by the typhoon, saying that government funds have already been “immensely depleted” because of the COVID-19 crisis.

READ: Duterte says looking for money for typhoon victims as funds ‘depleted’ due to COVID-19

“We are trying to raise the resources, I was also late [because] I was talking with the budget, you know our budget has already been immensely depleted because of COVID-19, we really spent our money,” he said.

READ: Duterte apologizes to ‘Odette’ victims in Palawan over delay in gov’t response 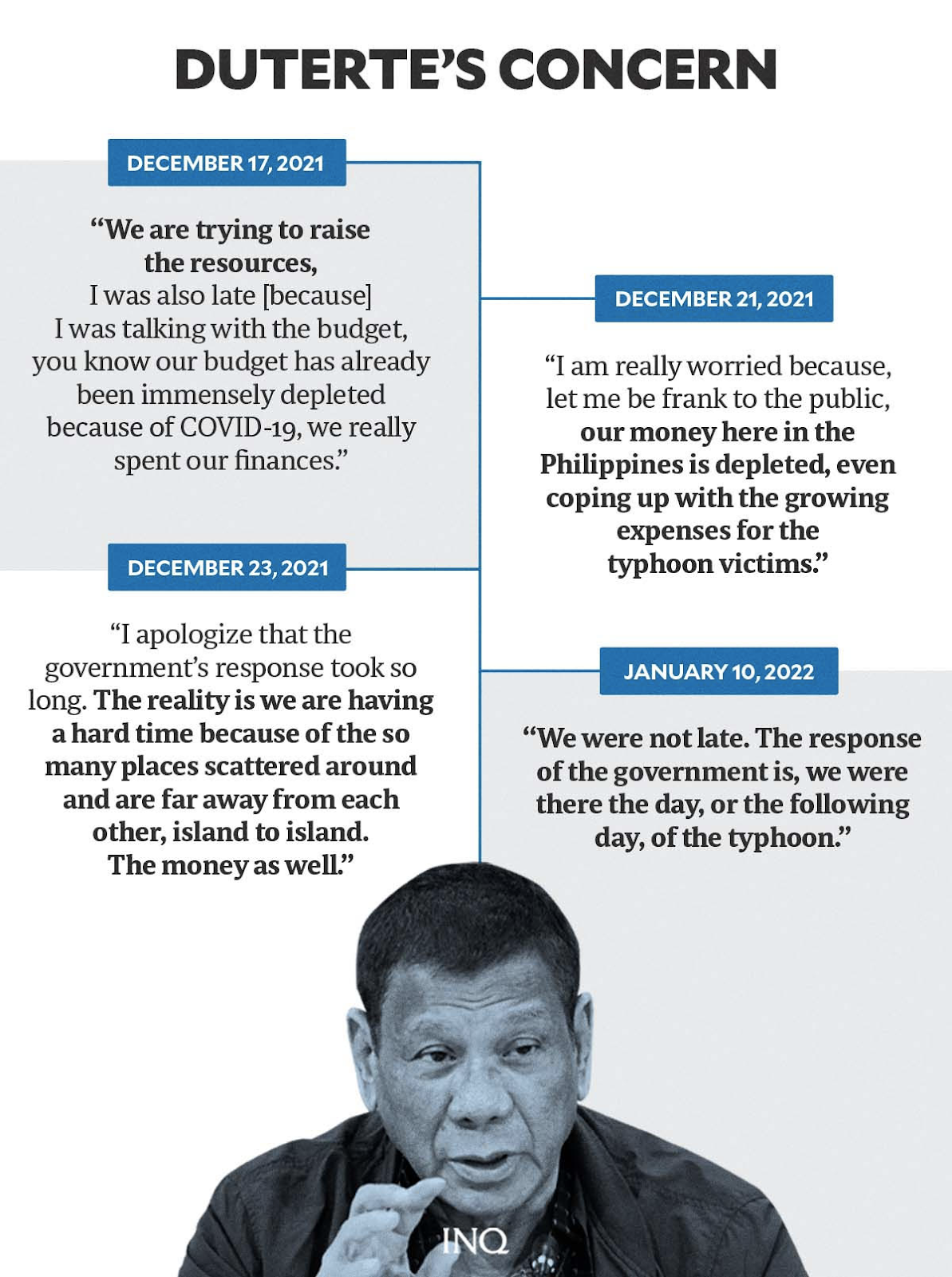 “The reality is we are having a hard time because of so many places scattered around and are far away from each other, island per island. The finances as well,” the President said.

Last Dec. 18, two days after Odette’s first landfall, Duterte said the government will raise an initial P2 billion to help Filipinos hit by the typhoon, reiterating that the COVID-19 crisis, especially in 2021, has depleted government resources.

He said the plan was to source the P2 billion from different government offices “in small amounts”. He explained that when typhoons hit, there is always a need to immediately bring back “normalcy” in affected areas.

“We’ll see tomorrow if we can release that immediately. But that is what I am promising you. It’s in billions but it’s not enough actually. When there are devastations, that might only be enough for one place,” he explained.

Africa said the Department of Budget and Management (DBM) then took almost two weeks to start releasing funds as assistance to people hit by the typhoon which left the Philippine Area of Responsibility on Dec. 18.

Tina Rose Canda, acting budget secretary, had said that an initial P1 billion had been released to local government units (LGUs) on Dec. 24 while the remaining P1 billion was released on Dec. 27.

Last Dec. 21, after saying that government resources have already been depleted, the President committed to release P10 billion from his office. 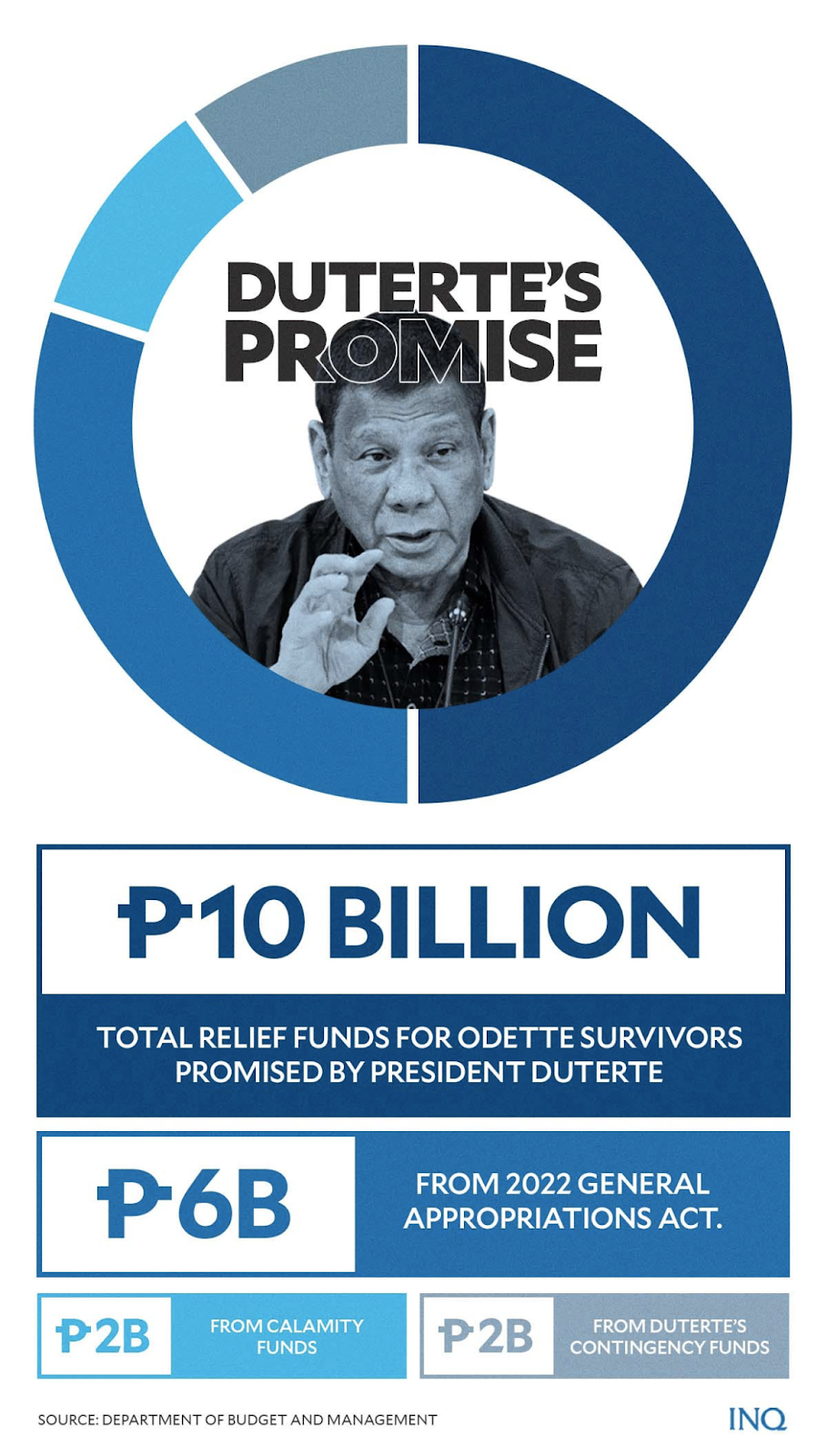 The DBM explained that P6 billion of the President’s promise would come from the proposed P5.024 trillion national budget for 2022. The 2022 General Appropriations Act (GAA) was signed on Dec. 30, 2021.

Canda explained that the initial P2 billion came from the National Disaster Risk Reduction and Management Fund or the “calamity fund” while the remaining P2 billion was available through the President’s contingency fund.

Last Dec. 29, as the President pledged to give P5,000 to indigent families in typhoon-hit provinces, the DBM released P4.85 billion for these LGUs:

With the signed 2022 GAA, Africa said the government has more than enough money since it has a P20 billion calamity fund and a P7 billion contingency fund.

“The government had more than enough funds to respond bigger and quicker last year and even more so today. Yet hundreds of thousands of families out of the millions affected are still waiting for cash aid and shelter assistance,” he said.

“It’s tragic that the government is hiding behind the veil of scarce public knowledge of the scale of Typhoon Odette’s destruction to scrimp on providing the humanitarian assistance needed,” he said.

The Department of Social Welfare and Development in Central Visayas recently said its resources were not enough to cover all the 475,022 affected families in Cebu province alone, explaining that its personnel were shocked when they were instructed to distribute P5,000 each.

RELATED STORY: Gov’t having no money for ‘Odette’ victims is ‘impossible’ — Bayan Muna