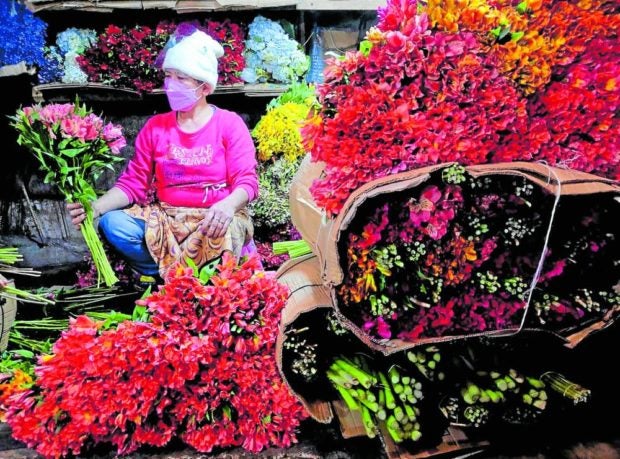 TRYING TIMES The latest spike in Baguio City’s coronavirus infections and stricter entry protocols for leisure travelers have reduced tourist traffic that peaked during the Christmas holidays, affecting small businessmen and traders, like this flower vendor at the public market. —EV ESPIRITU

BAGUIO CITY, Benguet, Philippines — Mayor Benjamin Magalong on Tuesday asked the city’s colleges and universities to suspend in-person classes because of the threat posed by the highly transmissible Omicron variant of COVID-19.

The medical programs of local universities have been allowed to conduct in-person interactions, particularly for those studying to become doctors and nurses who require clinical training at local hospitals.

But some students contracted the virus when they were deployed to hospitals in Mountain Province between the last week of December and the first days of January.

Magalong had scheduled a dialogue with the colleges and the Commission on Higher Education to discuss his proposal.

The local government has no direct supervision over universities and the decision to resume in-person class interactions would be up to them, the mayor said at a press briefing.

Universities in the city have vaccinated their students and were required to test them before they are sent to hospitals outside Baguio, Magalong said.

He said it was likely that the student nurses contracted the disease while traveling or at their destinations.

The mayor was referring to 18 students from a Baguio university who were due to undertake hospital duties in Bauko town, Mountain Province, until they were tested positive for COVID-19 along with an instructor on Jan. 4.

They were among the 22 patients recorded in the town as of Jan. 7, said nurse Karen Lonogan, a member of the Cordillera epidemiology team of the Department of Health.

Lonogan said the patients were part of a 165-member group who underwent testing on Jan. 3 prior to assuming their assignments at Luis Hora Memorial Regional Hospital in Bauko.

She said 90 were isolated while the others were quarantined after having been in close contact with the infected students.

Magalong said the city government and the university had sent food to the stranded students. 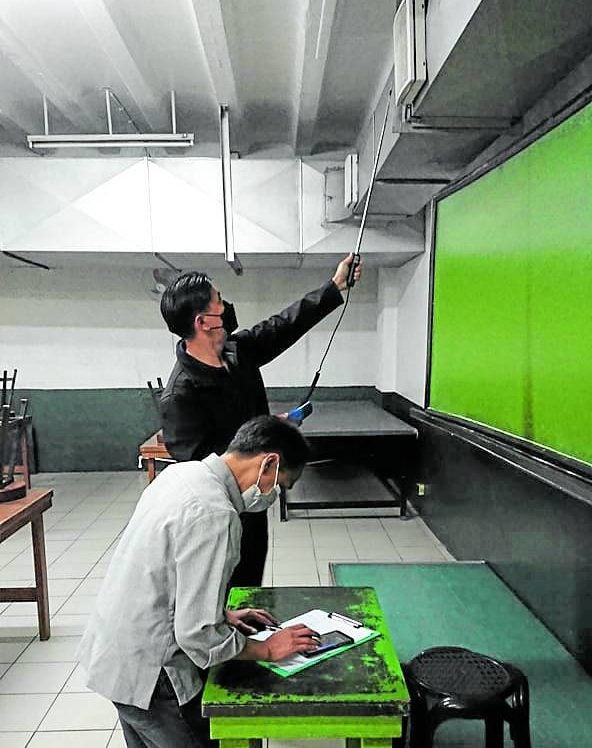 VENTILATION CHECK In this photo taken on Jan. 7, employees of the sanitation division of the Baguio City Health Services Office test the air change flow inside a classroom at the University of the Cordilleras in preparation for in-person classes. —PHOTO COURTESY OF BAGUIO CITY HEALTH SERVICES OFFICE.

A group of medical students had petitioned another Baguio university to postpone hospital assignments for at least two weeks, as well as extend tuition deadlines, according to militant youth group Anakbayan.

The petitioners said several third-year nursing students fell ill after their assignment at another hospital in Mountain Province from Dec. 26, 2021, to Jan. 1, 2022. Most of the students caught the flu although one tested positive for COVID-19.

Nursing students, according to a statement from Anakbayan, “shoulder the cost of their hospital duties — from reverse transcription-polymerase chain reaction (RT-PCR) testing, board and lodging, to personal allowances — to hone their craft as future nurses.”

“While the students have been clamoring for [in-person] classes and internship, this shall not be at the expense of the students’ welfare,” the group added.

This year’s wave of COVID-19 infections in Baguio—which reached a high of 1,377 active cases as of Jan. 11—appeared to have occurred on the week leading to New Year’s Day, and may affect the struggling Baguio economy in the first three months, Magalong said, citing a recent analysis of case data.

“All indications suggest that the rate of transmission is similar to the rapid spread of the Omicron variant,” he said, adding that this would mean that medical front-liners have to prepare for 400 to 500 cases a day at the peak of transmissions.

Because the latest patients overcame the disease in an average period of five days, Baguio would not automatically resort to lockdowns as many governments had done in previous infection surges, Magalong said.

The mayor said healthcare workers would focus on keeping those with no or mild symptoms isolated at facilities or in their homes to ensure hospitals would not be overwhelmed.