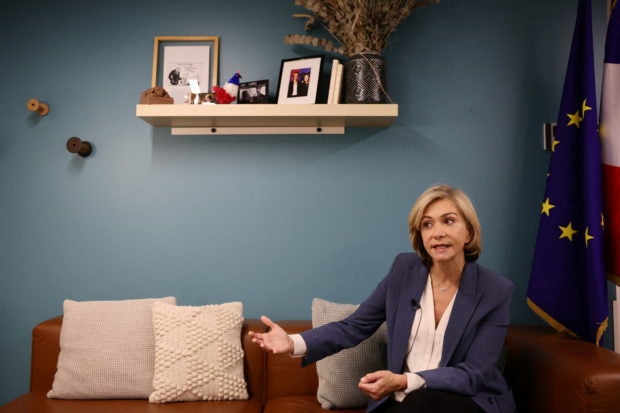 Valerie Pecresse, head of the Paris Ile-de-France region and Les Republicains (LR) right-wing party candidate for the 2022 French presidential election, speaks during an interview with Reuters at her campaign headquarters in Paris, France, January 7, 2022. REUTERS/Sarah Meyssonnier

PARIS — Fifteen years ago, Valerie Pecresse quelled a student uprising over her university reforms with the same blend of consensus-building politics and reformist mettle that she believes will now propel her to the French presidency.

In an office adorned with framed cinema posters, Pecresse, 54, reeled off a list of woes facing France that speak of her social and fiscal conservatism: poor control of national borders, violent city ghettos and a growing pile of debt.

“We need to restore order, both on our streets and in our national accounts,” she told Reuters.

A minister for higher education and then the budget during Nicolas Sarkozy’s presidency, Pecresse said last week she would bring out “the power hose” to clean up trouble neighbourhoods where the state had lost authority and lawlessness prevailed.

Critical of Macron for “burning a hole in the state coffers” during the pandemic, Pecresse has promised to reform France’s generous pension system and cut a bloated public wage bill – both pledges she says Macron has failed to deliver on.

Her style, she says, is “two-thirds (Angela) Merkel and one-third (Margaret) Thatcher”.

“I am a woman who consults, decides and acts,” she said. “The one-part Thatcher is to say ‘I’m not for turning’,” referring to a phrase in a 1980 speech when the conservative British leader refused to back down on liberalizing reforms.

Pecresse pointed to the cutting of hundreds of jobs at her head office to make way for more high-school staff, reduced spending and higher investment as proof she gets things done. In 2020, she won a second mandate to run the greater Paris region.

Opponents who had nicknamed her “the blond” had paid the price, she said. Asked if France was ready for a woman president, she replied: “Voters on the right have shown they’re ready, and they can be the most reticent to trust a woman.”

Pecresse’s party, which traces its origins to Charles de Gaulle, dominated French politics for much of the post-war era. But after Macron redrew the landscape in 2017, it has struggled to unite its center-right and staunchly conservative factions.

The defection of a senior conservative lawmaker to the campaign bid of far-right polemicist Eric Zemmour on Sunday underscored the challenge she faces keeping a feuding party together.

Opinion polls show her in a close-fought race with Marine Le Pen, leader of the traditional far-right, for the second spot in the election’s run-off vote. Zemmour follows close behind. Should she make it, she would be the most dangerous opponent for Macron, the surveys suggest.

Born in an upmarket Paris suburb and educated at France’s elite ENA school for politicians and civil servants, Pecresse is a moderate in a conservative party that has lurched rightwards as the far-right fuels anti-immigrant sentiment and a desire among many voters to get tough on law and order.

Pecresse has toughened her language on immigration and identity, seeking to neutralize the threat from Le Pen and Zemmour, whose promise to “save France” from Islam has polarized France.

She says she would end the automatic right to French citizenship for people born in France and stiffen judicial sentences in places where police have lost control.

On a table in Pecresse’s office sits a photograph of Samuel Paty, the teacher decapitated by a Chechen-born teenager in a suburb of Paris in 2020 because he used caricatures of the Prophet Mohammad in a lesson on free speech.

Pecresse said the teacher’s portrait would follow her to the Elysee Palace if she won the election.

“We have to be unbending in the respect of our values,” Pecresse said. “In the public space, the law comes before faith. It’s the same rights, the same duties for all.”