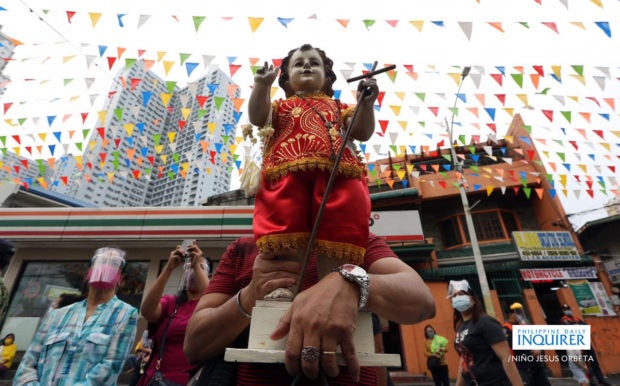 DAVAO CITY — Organizers of the Feast of the Holy Infant Jesus have agreed to close down Shrine Hills to the public on January 15 and 16, the days when crowds used to gather here each year for the festivities in honor of the Santo Niño.

Even as the number of fully-vaccinated individuals in the city neared its 1.2 million target, city officials remained cautious against gatherings and events following the recent rise in coronavirus disease (COVID-19) cases here and in other parts of the country.

According to Police Col. Kirby John Kraft, chief of the Davao City Police Office, the administrator of the Holy Infant Chapel has agreed to the request of Mayor Sara Duterte to do away with mass gatherings this year in anticipation of the surge of COVID-19 cases following the parties and gatherings that people indulged in during the Yuletide season.

“Shrine Hills’ administration has agreed to close down on January 15 and 16 but masses will still be held online,” said Kraft. “Police and security forces will be deployed outside the Shrine (to see to it that the ban on gatherings will be followed). Those who would like to light candles can do it outside as we have done in the previous year,” Kraft said.

This was already the second year when Shrine Hills called off the yearly Santo Niño festivities because of the pandemic.

Duterte earlier warned the public of the likelihood of another surge of COVID-19 cases to take place in the last two weeks of this month, or at least 14 days after the end of the celebrations.

The number of the daily new cases in the city, which started this year at single digit level, has reached 74 cases on Sunday, January 9; down from the 120 cases on Saturday, January 8 and the 99 cases on Friday, according to the Department of Health (DOH) report in the Davao region.

As of January 6, the city government has fully-vaccinated 1.16 million residents, or only three per cent shy of its 1.23 million target to achieve herd immunity, city health officials said.

But Dr. Michelle Schlosser, spokesperson of the City COVID-19 Task Force, said the booster shots only had less than 50,000 takers as of Jan. 6. She reminded the public of the importance of getting the booster shots to provide themselves with “another layer of protection” against the virus.

Schlosser said the city government pushed for more vaccines, including those to be used for booster shots to boost people’s protection against COVID-19.

“If you are unvaccinated, there is a big chance that the infection will become severe or critical. Based on the DOH data on December 31, 90 per cent of the severe and critical cases were unvaccinated,” she added.