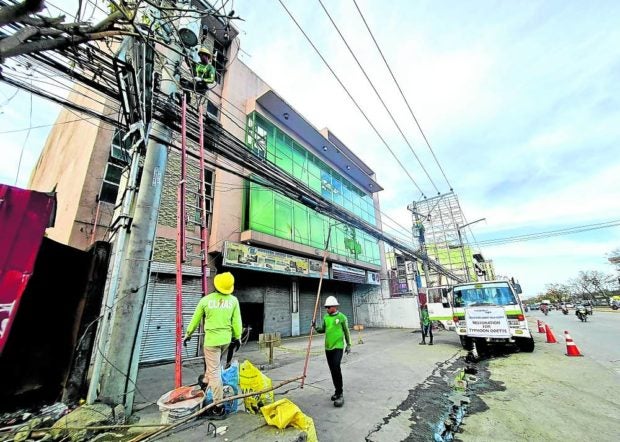 VOLUNTEERS These linemen from Cotabato province are among the volunteers helping their counterparts in Visayan Electric Co., the power provider of Metro Cebu, in fixing power lines in Cebu City that were damaged by Typhoon “Odette” (Rai) on Dec. 16, 2021. —PHOTO COURTESY OF VISAYAN ELECTRIC CO.

CEBU CITY, Cebu, Philippines — The Cebu provincial government and the power distribution company here have launched separate investigations to unmask unscrupulous persons and businesses that have taken advantage of the misery of Cebuanos still recovering from the onslaught of Typhoon Odette (international name: Rai).

The Visayan Electric Co. on Monday announced it was investigating reports that some of its contractors were asking for money from customers who wanted to speed up the restoration of electricity in their businesses or homes in Metro Cebu, many of which still have to get energized after power lines were knocked down by the typhoon on Dec. 16 last year.

The Visayan Electric’s probe came on the heels of an investigation that Cebu Gov. Gwendolyn Garcia has asked the Department of Trade and Industry (DTI) to initiate over the exorbitant cost of construction materials amid high demand from local governments and from residents rebuilding damaged houses.

For example, a galvanized iron sheet for roofing that cost P400 before the typhoon was being sold from P600 to P800 per sheet as of Monday, a check by the Inquirer in at least two hardware stores in Cebu City showed.

“Visayan Electric, our accredited contractors, and industry partners working within our franchise area do not require nor accept any re-electrification or prioritization fees. Restoration of electricity is free of charge,” the company said in a statement on Monday.

“Rest assured that people who will be proven to have done such illegal actions will be penalized accordingly,” it added.

Visayan Electric called on the public not to entertain or participate in any demand for payment for power restoration and instead report this immediately through its hotline number 230-8326, or by sending a message to the company’s Facebook page.

Visayan Electric said the company would not be liable for any loss or damage related to unauthorized connection since it could not guarantee for the quality of wiring, equipment or materials that were used in such transactions.

These unscrupulous contractors, or persons or companies paid by Visayan Electric to assist the company’s linemen and volunteers in the power restoration work, were asking from P500 to P1,000 from each household that wanted to have its electricity back, according to sources, including some homeowners who admitted paying these persons.

The firm appealed to the people to be patient as their teams were working 24 hours a day to fast-track the restoration of power in Cebu.

Visayan Electric earlier said it would take until Jan. 31 to restore all the power connections in Metro Cebu since most of their facilities—from electric posts to power lines, were downed by the typhoon.

As of Jan. 7, Visayan Electric had energized 196,123, or 41 percent, of the 474,182 affected customers in its franchise area that covers the cities of Cebu, Mandaue, Talisay and Naga; and the municipalities of Liloan, Consolacion, Minglanilla and San Fernando.

Meralco, Davao Light and Power Co. (sister company of Visayan Electric) and 13 other power utilities in the country have earlier sent teams to Cebu to help restore power on the island.

Garcia, on the other hand, said she had asked the DTI to investigate construction supply stores that did not only jack up their prices but have also refused to sell their materials to the provincial government.

“They do not seem to be too excited about supplying the province of Cebu at prices that would definitely be lower than the runaway retail prices that are now happening in hardware and other construction supply stores [in Cebu],” she said on Friday.

“I hope [Trade] Secretary Mon (Ramon) Lopez can do something about this because you know these suppliers are really taking advantage. The prices of GI (galvanized iron) sheets now in the retail market have really soared and are in short supply because the direct suppliers are holding on to them,” she added.

Families who were rebuilding their homes were also affected by the high prices of construction materials, she said.

The Cebu provincial government has recently announced that they will release P2 billion for the rebuilding and rehabilitation program of families affected by Odette.