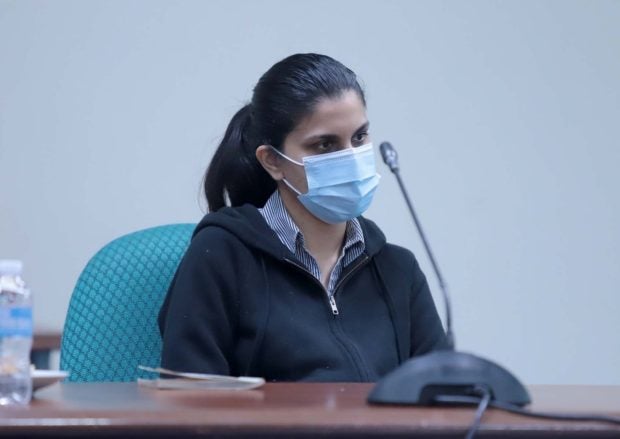 Pharmally Pharmaceutical Corp. executive Twinkle Dargani attends the continuation of the virtual inquiry of the Senate Blue Ribbon Committee in this file photo taken prior to her detention.(Photo by lBERT CALVELO / Senate PRIB)

In a statement, Sotto said he and Senate blue ribbon committee chairman Richard Gordon agreed to release Dargani, who has been detained in the Senate since November last year.

The release comes after Dargani’s mother expressed deep concern over her daughter’s “deteriorating mental health condition,” according to Sotto.

“Her mother has promised to present her to the Senate whenever she is needed by the Senate Blue Ribbon Committee,” Sotto said.

It was earlier Monday that the blue ribbon committee received a “very urgent motion for house arrest and/or release on recognizance based on humanitarian grounds” from Dargani’s counsel in light of her health condition, according to a letter Gordon addressed to Sotto.

Gordon, however, proposed that Dargani “be placed under house arrest” under several conditions.

These conditions include Dargani staying in her residence “and in no other place” during the continuation of the blue ribbon committee hearings.

Dargani should also make herself available “every time there is a hearing.”

The Pharmally official is also prohibited from leaving her house and the country while the investigation has not yet been terminated.

Gordon also proposed that Dargani provide weekly updates to the committee regarding her health.

Sotto said he had instructed Senate Sergeant-at-Arms Rene Samonte to release Dargani to her mother on Monday night.

The Senate is currently under lockdown until Jan. 16, as it recorded 46 active COVID-19 cases among its personnel while over 100 are under quarantine.

In a message to reporters, Samonte said Dargani would undergo a medical check-up before being released.

“We are also preparing necessary documents for turnover,” he added.

Dargani was detained in the Senate after she and her brother, Mohit Dargani, were cited in contempt over their “refusal” to submit financial documents subpoenaed by senators during an ongoing Senate blue ribbon investigation.