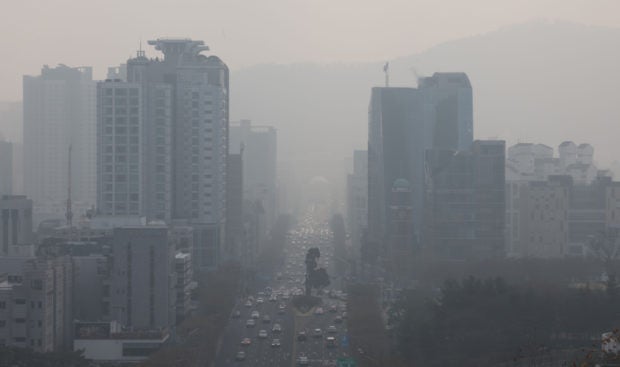 SEOUL — Korea on Sunday was blanketed by dangerous levels of ultrafine dust expected to persist until at least Monday, which prompted the government to issue emergency reduction measures for the first time this year.

According to the Metropolitan Air Quality Management Office under the Ministry of Environment, the ultrafine dust density levels in Seoul, Gyeonggi Province and South Chuncheong Province were projected to be “very bad“ with over 76 micrograms per cubic meter.

Ultrafine dust levels for other areas including parts of Gangwon, North Chungcheong and North Gyeongsang Provinces was also projected to be in the “bad” range, 36~75 ㎍/㎥.

The national forecasting authorities projects the ultrafine dust density in four-tier system, with the other two being “good (15 and under)” and “average (16~35).”

The authorities advised citizens to refrain from going outside, and to wear high-filtration face masks, such as the KF 94 type. Skies are expected to clear around Tuesday.