More than 100,000 march in France against COVID-19 vaccine requirements 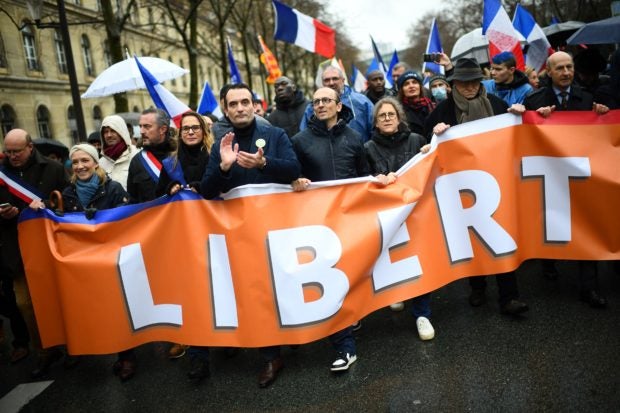 French nationalist party “Les Patriotes” (The Patriots) leader Florian Philippot (C) and lawyer Fabrice di Vizio (CR) march during a rally called by his party against the compulsory Covid-19 vaccination and the mandatory use of the health pass, in Paris, on January 8, 2022. (Photo by Christophe ARCHAMBAULT / AFP)

PARIS — More than 100,000 people across France protested Saturday over what they say are government plans to further restrict the rights of the unvaccinated, days after French President Emmanuel Macron vowed to “piss off” those refusing the jab.

The turnout was four times higher than the numbers who answered the December 18 call to protest, when 25,500 people marched across the country, according to government estimates.

The protests oppose a planned law that will require individuals to prove they are fully vaccinated against the coronavirus before they can eat out, travel on inter-city trains or attend cultural events.

On Thursday, France’s lower house of parliament passed the controversial bill in a first reading. The government has said it expects the new requirements to be implemented by January 15, although lawmakers in the Senate could now delay the process.

Interior ministry officials said 105,200 people participated in Saturday’s protests across France, 18,000 of them in the capital Paris, where police reported 10 arrests and three officers slightly injured.

Elsewhere there were 24 arrests and seven police officers lightly injured according to the ministry.

Among the larger demonstrations, around 6,000 demonstrators turned out in Toulon, while in Montpellier police used teargas during clashes with protesters.

The Paris protesters, many of them unmasked, braved the cold and rain brandishing placards emblazoned with the word “truth” and “No to vaccine passes”.

Others took aim at Macron, using the same coarse language he employed in his attack on people holding out against vaccination earlier in the week.

Macron said Friday that he fully stands by controversial remarks he made on Tuesday, when he vowed to “piss off” people not vaccinated against Covid-19 until they accept shots.

The earthy language and uncompromising approach provoked uproar in French media and from opponents.