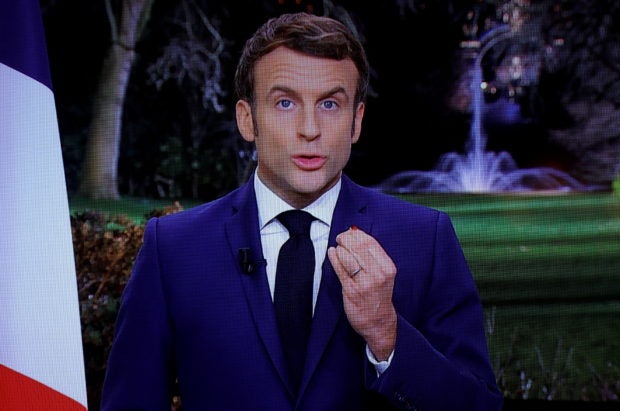 French President Emmanuel Macron is seen on a screen as he delivers his New Year’s speech to the nation at the Elysee Palace in Paris, France, December 31, 2021. REUTERS/Christian Hartmann

PARIS — French President Emmanuel Macron said on Tuesday he wanted to “get on the nerves” of the non-vaccinated, in a slangy, cutting remark that prompted howls of condemnation from opposition rivals less than 4 months before the next presidential election.

“The unvaccinated, I really want to get on their nerves. And so, we’re going to continue doing so, until the end. That’s the strategy,” Macron told Le Parisien newspaper in an interview published late on Tuesday.

France last year put in place a health pass that prevents people without a PCR test or proof of vaccination to enter restaurants, cafes and other venues. The government wants to turn it into a vaccine passport that means only the vaccinated can have a health pass.

The expression “emmerder”, from “merde” (shit), that can also be translated as “to piss them off” or “to get on their tits”, is considered “very informal” by French dictionary Larousse and prompted immediate criticism by rivals on social media.

Macron has been criticized in the past for off-the-cuff remarks which many French people said came across as arrogant, cutting or scornful. He has later expressed contrition on several occasions.

In the detailed interview, Macron’s first in the new year, the president also said he had a good mind to run for re-election in April, but did not explicitly announce his intention to run.

As the clear favorite in the polls, Macron has not yet officially said he was running, although his lieutenants are already preparing a campaign.