“Bongbong Marcos was initially exposed to his chief security who is confined in one of the isolation/quarantine facility since last Tuesday and subsequently to me. I was tested yesterday morning and the result came out early today and I’m positive for COVID,” Marcos spokesperson Vic Rodriguez said in a Viber message.

Marcos on Friday failed to show up via zoom during the Commission on Elections (Comelec) First Division’s preliminary conference of disqualification cases.

The respondents’ counsel has presented an electronic copy of Marcos’ medical certificate which stated that he suffered from fever and a congested throat. 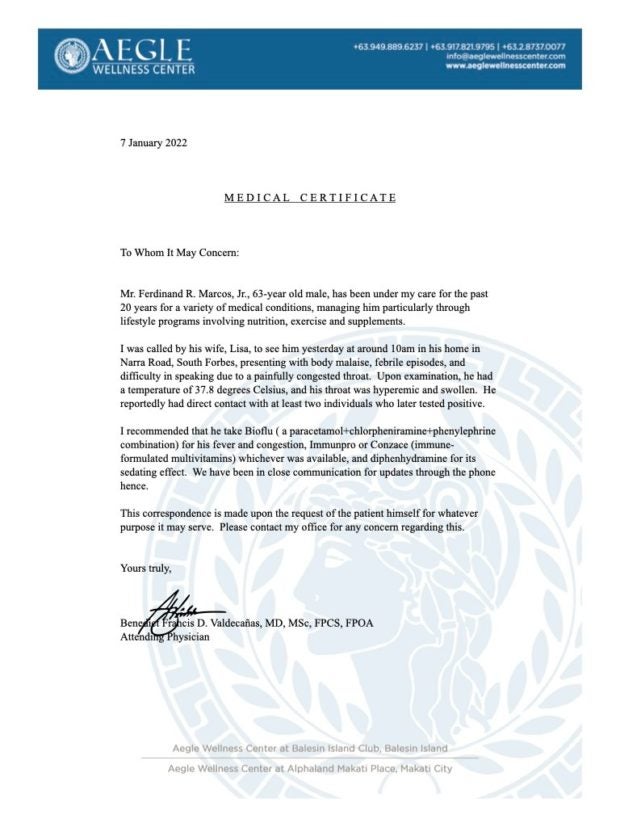 A copy of the medical certificate issued by the camp of Bongbong Marcos.

On the other hand, the petition of Abubakar Mangelen, who claims to be the duly elected chairman of Partido Federal ng Pilipinas (PFP) was not heard after neither he nor any counsel of his appeared on the hearing. Marcos is the known standard-bearer of PFP.

Initially, the hearing was delayed because the First Division waited for his medical certificate.

Guanzon said that Marcos should appear via teleconference if the council could not provide the medical certificate.

The medical certificate was presented after over an hour.

The medical certificated stated that “upon examination, he had a temperature of 37.8 degrees Celsius, and his throat was hyperemic and swelling. He reportedly had direct contact with these two individuals who later tested positive [for COVID-19].” The contents of the medical certificate were read by the Clerk of the Commission.

When asked if the presidential aspirant had his swab test, his spokesperson Vic Rodriguez told INQUIRER.net: “I think he will undergo swab soon.”