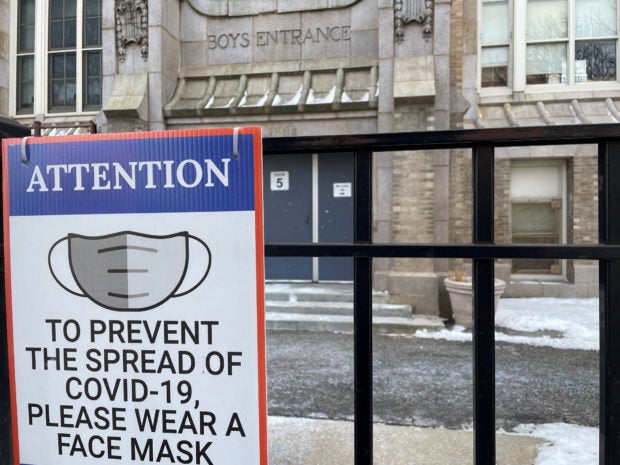 The Jahn School of Fine Arts lies empty after Chicago Public Schools, the nation’s third-largest school district, said it would cancel classes since the teachers’ union voted in favor of a return to remote learning, in Chicago, Illinois, U.S. January 5, 2022. REUTERS/Eric Cox

The stalemate, idling some 340,000 students, came after the teachers’ union voted to reinstate virtual instruction and pushed for more rigorous safety protocols, including wider testing, citing the rapid spread of the highly infectious Omicron variant in recent weeks.

While most U.S. public school districts have reopened their campuses for the new year, education systems in some major cities, including Atlanta, Milwaukee and Detroit, have opted for online learning or delayed back-to-classroom plans due to staff shortages and Omicron concerns.

In addition to disrupting schools, the surge has affected air travel, live entertainment and courts and other workplaces, while severely straining healthcare systems around the country.

Experts say Omicron, while more highly contagious, appears less likely to cause severe illness and death than previous variants. But the sheer volume of new cases has driven COVID-19 hospitalizations sharply higher even as more medical workers are being sidelined by the illness.

The number of new U.S. coronavirus hospitalizations reported on Thursday stood at 119,000 patients, over 10 times the daily figures from about a week ago and nearing the record 132,0000 from January 2021, data collected by Reuters showed.

The Chicago Teachers Union urged its 27,000 members to stay out of the classroom and work remotely through Jan. 18, unless the coronavirus surge subsides or the union and district come to terms on new in-person learning protocols before then.

After 73% of rank-and-file union members voted in favor of working remotely starting Wednesday, the school district said classes would be canceled while the two sides continued negotiations aimed at ending their impasse.

Instruction was canceled again on Thursday, but the district said some classrooms may reopen on a school-by-school basis on Friday, depending on available staff. According to the district, one in 10 teachers showed up for work on Wednesday and one out of every eight did so on Thursday, despite the dispute.

Mayor Lori Lightfoot and the district have branded the walkout an illegal work stoppage for which teachers’ pay will be docked. The union has accused the mayor and school officials of “locking out” teachers by freezing their online instruction platforms, preventing a return to remote learning while the conflict is unresolved.

The mayor, district officials and the city’s public health commissioner contend the schools are safe and that risks have been minimized to acceptable levels by masking, social distancing, improved ventilation and on-site testing.

The White House appeared to side with the district, with press secretary Jen Psaki saying on Wednesday and Thursday that it would continue to make the case for public schools to be kept open, including in Chicago.

The union asserts that the conditions for any return to classrooms during a pandemic should be subject to collective bargaining and that safeguards in place do not go far enough.

In particular, teachers criticized the district’s policy of only testing students whose parents register for the screening program, rather than making testing mandatory for all students, except those who meet narrow criteria to opt out.

The union has cited data showing that vaccination rates are especially low among minority students. The district counters that remote learning has proven to be a fraught experience that “ends up hurting our students of color the most.”

As of Wednesday evening, according to the Chicago Tribune, about 9,000 district students and a record 2,300 staff members were in isolation because they had tested positive for COVID-19 or came in close contact with someone who had.

The latest wave of Omicron-driven COVID-19 infections and hospitalizations has interfered with plans by public school systems throughout the country to welcome students back from winter vacation.

The coronavirus surge has prompted postponement of in-person learning at more than 5,200 schools nationwide during the week beginning Jan. 2, according to the online education tracking service Burbio, which shows the disruptions concentrated mainly in the mid-Atlantic states and Midwest.