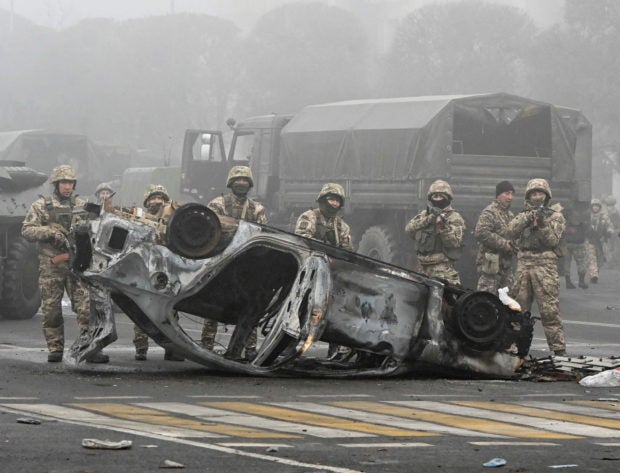 Troops are seen at the main square where hundreds of people were protesting against the government, after authorities’ decision to lift price caps on liquefied petroleum gas, in Almaty, Kazakhstan January 6, 2022. REUTERS/Mariya Gordeyeva

ALMATY — Russia has sent paratroopers into Kazakhstan as part of an international peacekeeping force to quell deadly unrest in the central Asian country, a military alliance of former Soviet states said Thursday.

Earlier, Kazakh police said forces had “eliminated” tens of rioters in the largest city of Almaty as the unrest sparked by rising fuel prices boiled over into the biggest protests since independence in 1991.

Several armored personnel carriers and scores of troops entered the main square of Almaty on Thursday morning where hundreds of people were protesting against the government for the third day, Reuters correspondents reported from the scene.

Gunshots were heard as troops approached the crowd, according to Reuters witnesses, but the situation in the square had calmed down since then. Unverified video on social media showed troops patrolling Almaty’s foggy streets overnight, firing weapons, as well as widespread looting in the city.

State television on Thursday showed a video of a pile of weapons on the street, with people walking up and taking them.

TASS news agency quoted the Kazakh health ministry as saying more than 1,000 people had been injured during the protests, and more than 400 of them were in the hospital.

The unrest began as protests against the rising price of liquefied petroleum gas, a fuel used by the poor to power their cars, but has since turned into anti-government riots feeding off deep-seated resentment over three decades of rule by former president Nursultan Nazarbayev and his hand-picked successor.

Nazarbayev, 81, stepped down in 2019 but remains a political force and his family is believed to control much of the economy, the largest in Central Asia. He has not been seen or heard from since the protests began.

“It is an undermining of the integrity of the state and most importantly it is an attack on our citizens who are asking me… to help them urgently,” he said.

He also ordered government protection for foreign embassies and businesses owned by foreign companies. The nation’s reputation for stability had helped attract hundreds of billions of dollars of foreign investment in oil and metals industries.

State TV also said the National Bank of Kazakhstan had decided to suspend work of banks in the country for the safety of their workers. The Internet in the country is mostly down.

Eight police and national guard troops were killed in the unrest on Tuesday and Wednesday, Russia’s state-owned Sputnik agency said on Wednesday, quoting the Kazakh interior ministry. Russian news agencies, quoting Kazakh media, later said two soldiers had also been killed in what they described as an anti-terrorist operation at Almaty airport.