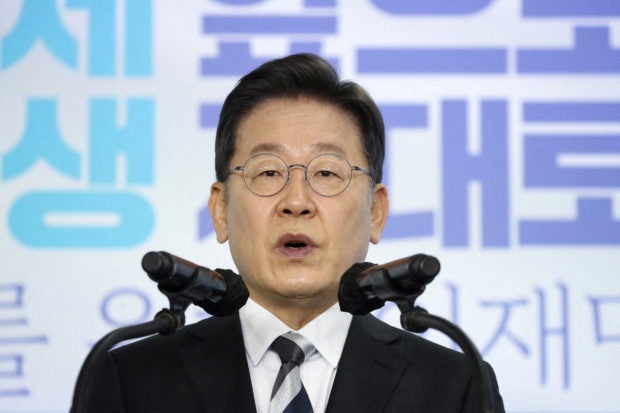 SEOUL — South Korea’s ruling party presidential candidate ignited a debate this week after he proposed allowing public healthcare insurance to cover hair loss treatment, fanning both cheers from some voters and criticism over his populist agenda.

Lee Jae-myung, the flag bearer of the Democratic Party, made that pledge, saying almost 10 million people suffer from hair loss but many of them order medicines from overseas or resort to prostate drugs as an alternative due to high treatment costs.

His proposal triggered explosive responses from some people, with a 15-second video clip in which Lee did a spoof of a hair loss commercial saying he’s the best candidate for “your hair,” widely circulating and generating parodies in social media.

“Let’s implant Lee Jae-myung for us,” a user wrote, replying to a post of Lee’s slogans on hair loss uploaded in an online hair loss community.

Jeong Da-eun, a mother of two, told a meeting arranged late on Wednesday by Lee’s party with voters suffering from hair loss that she gave up medical treatment as it required 4 million won ($3,325) in six months, resorting to a good shampoo and food.

But the pledge fueled criticism from others, with the opposition calling it the latest item on Lee’s populist agenda. Ahn Cheol-soo, a minor opposition candidate who was formerly a doctor and software tycoon, described Lee’s proposal as irresponsible and promised to cut the prices of generic drugs and fund the development of new treatment if elected.

Lee, who once said he aspired to be a “successful Bernie Sanders,” has shot to fame on the back of his push for universal basic income and aggressive COVID-19 responses during his stint as Gyeonggi province governor.

Lee Sang-ee, a professor at Jeju National University’s medical school, said the national health insurance might falter if it spends hundreds of billions of won to cover hair loss, when it is designed to help those suffering from serious ailments.

There is no official data on how many South Koreans suffer from hair loss. The National Health Insurance Service only provided yearly tallies of people who have received hospital treatment, which amounted to some 230,000 in 2020.

Lee Jae-myung said on Wednesday that hair loss coverage is necessary from the aspect of “body completeness,” and his campaign is studying its potential financial impact.