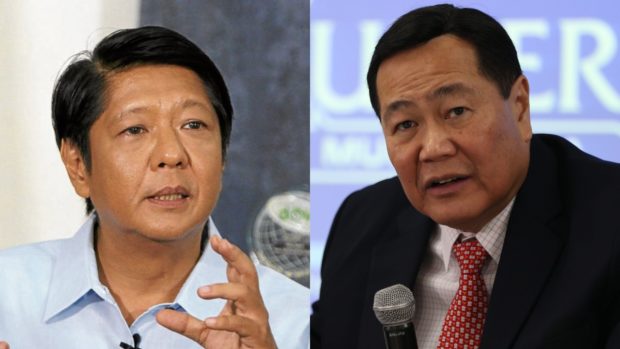 In response to Carpio’s taunt, the camp of the former senator accused the former magistrate of “poorly scripted and laughable political antics.”

Speaking in a forum hosted by opposition coalition 1Sambayan, Carpio claimed that Marcos has not yet “served his sentence” under a Court of Appeals (CA) decision that affirmed his tax conviction in 1995.

He further claimed that there is “no record at all on file” with the Quezon City Regional Trial Court that Marcos paid the fine that he was ordered to settle by the CA in its decision.

In July 1995, Marcos was convicted by the Quezon City RTC Branch 105 for failure to file income tax returns and pay income taxes from 1982 to 1985. He was sentenced to serve a total of seven years in prison and ordered to pay a fine for several counts of violation of the National Internal Revenue Code.

Marcos then appealed to the CA, which ruled in 1997 to uphold the conviction but modified the penalty by removing the prison term and merely imposing a fine.

“BBM (Bongbong Marcos) is still a certified convict who is disqualified to run for president of the Philippines, to vote and to participate in any election in our country,” Carpio said.

“He has not served his sentence. This means that the BBM disqualification under Section 12 of the Omnibus Election Code has not been lifted,” he added.

Carpio noted that under Section 12 of the Omnibus Election Code, any person convicted of a “crime involving moral turpitude shall be disqualified to be a candidate and to hold any public office.”

Such disqualification is “removed after the expiration of a period of five years from his service of sentence.”

Aside from the Omnibus Election Code, Carpio said Section 253 of the Tax Code “perpetually” disqualifies Marcos from “holding any public office, to vote and to participate in any election” if he is “convicted of any crime penalized” by the said law.

“Because the law says ‘any crime,’ it is immaterial whether or not the crime involves moral turpitude. It is also immaterial if the rest of the sentence has been served as the disqualification takes effect immediately upon finality of the judgment,” Carpio said.

“The ‘perpetual disqualification’ under Section 253 takes effect immediately upon finality of the judgment of conviction, which in BBM’s case took place on August 8, 2001, when the Supreme Court granted BBM’s withdrawal of his appeal,” he added.

He added that BBM’s “separate and independent, perpetual disqualification under the Tax Code “remains in effect up to this day and can only be lifted by a presidential pardon and none has been issued to him.”

“In short, starting August 8, 2001, BBM was already perpetually disqualified from holding any public office, from voting and from participating in any election,” Carpio went on.

Last December 22, Marcos’ camp said that the tax liabilities of the presidential aspirant have already been paid—showing a certification from the Bureau of Internal Revenue (BIR) that he paid around P67,000 in relation to his tax case.

Carpio, however, noted that payment of fines should be settled with the trial court that handed down his conviction.

“What is payable to the BIR is the deficiency income tax,” he added.

But Atty. Vic Rodriguez, chief of staff and spokesperson of Marcos, tagged Carpio’s statements as among the “poorly scripted and laughable political antic” of their opponents.

“The BBM-SARA Uniteam is still in the middle of reaching out to the victims of Typhoon Odette and forwarding help in the frontlines with the latest surge in COVID cases,” Rodriguez said in a message to INQUIRER.net when sought for comment on Carpio’s remarks.

“We have answered many, many, many times the similar poorly scripted and laughable political antic of our opponents and the continuing caper of ret. Justice Antonio Carpio to deceive the electorate is not only uncalled for but does not deserve our time nor merit the Filipino people’s attention,” he added.

At present, there are several pending petitions filed before the Commission on Elections against Marcos’ presidential bid in 2022.