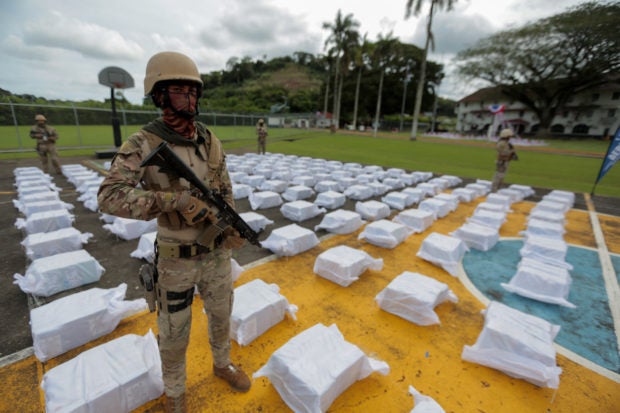 Members of the National Aeronaval Service (SENAN) guard drug packages as they are displayed during a press conference at a base in Panama City, on October 30, 2021. – Panama seized 100 suitcases containing 3,499 packages of presumed illicit substance in a container coming from San Vicente, Chile, in transit through Panama with Netherlands as its final destination. (Photo by Rogelio FIGUEROA / AFP)

The figure represented a 43 percent increase on the previous record of 90 tons from 2019.

“In 2021, as a result of 565 operations against organized crime and drug trafficking, 128.7 tons of drugs were seized,” Cortizo told the National Assembly parliament.

In 2020, despite lockdown measures imposed to stop the spread of the Covid-19 pandemic, Panama recorded its third largest haul of 84 tons.

The news comes a month after Panama announced a record haul of drug money — more than $10 million in cash, which took investigators more than 12 hours to count after a seizure from a house in Nueva Providencia, in Colon province.

Cortizo, in his remarks to lawmakers, added that Panama’s murder rate in 2021 was 11.5 per 100,000 inhabitants, “mostly linked to organized crime.”

“In the fight against crime I have not negotiated nor will I negotiate with criminals,” insisted Cortizo.

Authorities say drug trafficking from Caribbean ports to Europe is also on the rise.

In recent weeks, Panamanian police dismantled two criminal groups under Colombia’s Gulf Clan cartel, which controls around a third of cocaine production in the South American country — some 300 tons.

Colombia, US seize 7.5 tons of cocaine near Panama waters