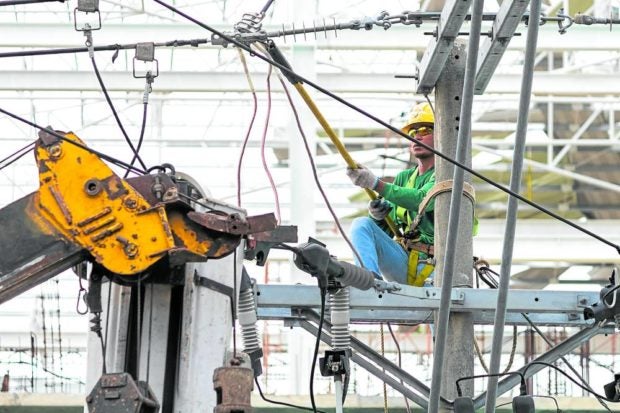 A power lineman in Metro Cebu works on restoring electricity to the city as the management of cold storage facilities worried about vaccines in their care. —Contributed photo

Based on reports the National Task Force (NTF) Against COVID-19 received on Tuesday, Galvez said the number of vaccine doses that could no longer be used totaled 4,120.

However, he noted that the number could climb further as they were still awaiting reports of doses that had been compromised in Surigao and other areas in Caraga, one of the worst-hit regions, having taken the full force of Odette when it first made landfall on Dec. 16.

“Though we earlier said that all vaccine [doses] are precious, this is considered negligible considering the extent of the damage [caused by Odette],” said Galvez, the chief implementer of the NTF.

The relatively low wastage could be attributed to the efforts of the local governments, the Philippine National Police and the Armed Forces of the Philippines, he added.

“They issued directives to their units to take care of our vaccines. They provided the needed gasoline to run the generators,” Galvez said.

Immediately the day after the storm hit them, Siargao and Cebu resumed their inoculation drives out of fear the vaccine might get spoiled.

According to Galvez, one of the doctors in Cebu even said, “This is just a typhoon, our vaccination continues.”

However, vaccine deliveries in several areas badly battered by Odette — including Cebu, Palawan, Leyte, and provinces in the Caraga region — could be hampered by long periods of power outages. A steady supply of electricity is needed to safely store vaccine doses in freezers and not risk compromising their quality.

As of Wednesday, more than 208 million doses of COVID-19 vaccine have arrived in the country—both procured and donated—since February. Of these, more than 72 million, or 35 percent, have yet to be distributed.

Galvez assured the public that all vaccines had been properly stored, saying the capacity of all cold storage facilities for vaccines in the country could accommodate 96 million doses.

Odette battered parts of Luzon, the Visayas and Mindanao from Dec. 16 to Dec. 18.

According to the Department of Agriculture, damage and losses caused by Odette have ballooned to P8 billion as of Tuesday evening, with the agency projecting further increases in the coming days.

The typhoon has affected 113,479 farmers and fishers in 11 regions, mostly in Visayas and parts of Mindanao. The volume of production loss reached 171,222 metric tons covering 341,280 hectares of agricultural areas.

Meanwhile, the National Disaster Risk Reduction and Management Council (NDRRMC) reported that the number of families affected by Odette has so far reached a total of 1,082,910 or the equivalent of 4,235,400 individuals.

The NDRRMC on Tuesday reported the number of deaths at 397, with 83 people missing and 1,147 injured.