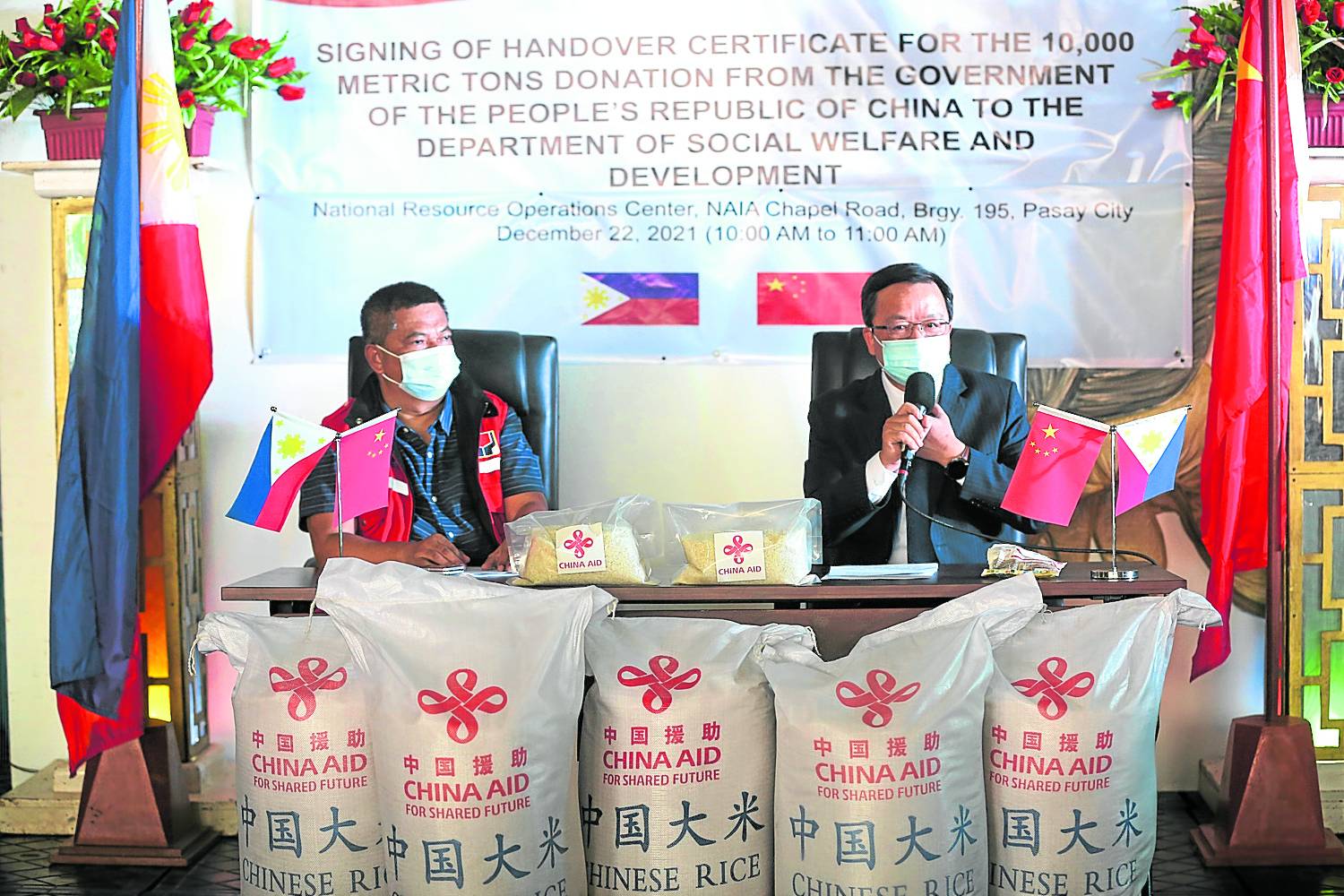 RICE DONATION Huang Xilian, the Chinese ambassador toManila (right), turns over some 10,000 metric tons of rice to the Department of Social Welfare and Development on Wednesday as part of the relief efforts for victims of Typhoon “Odette.”—NIÑO JESUS ORBETA

Financial and humanitarian assistance continued to pour in from several countries to help hundreds of thousands of people in the Visayas and Mindanao recently affected by Typhoon “Odette” (international name: Rai).

Canada is committing up to CA$3 million (approximately P120 million) for relief efforts in the Philippines, of which CA$500,000 (P20 million) will be provided to the Red Cross, International Development Minister Harjit Sajjan said.

Canada will also release an additional CA$50,000 (P1.9 million) to support local relief efforts in the Caraga region, according to the Canadian Embassy.

“Canada stands in solidarity with the Philippines, and will work with our partners to extend assistance to those in need,” Canadian Ambassador Peter MacArthur said in a statement.

The European Union is also allocating 1.7 million euros (P96.4 million) in humanitarian funding to provide emergency assistance to the typhoon-hit provinces in the Philippines.

“The EU stands by the Filipino people in these difficult times and has started to provide emergency relief actions to those affected,” said EU Commissioner for Crisis Management Janez Lenarčič.

China, on the other hand, committed on Wednesday an emergency cash assistance of US$1 million (P50 million) to support the government’s relief and recovery efforts.

Chinese Ambassador Huang Xilian also turned over some 10,000 metric tons of rice donation to the government.

Earlier, the Chinese Embassy announced sending about P8 million worth of relief goods to the most affected population in Visayas and Mindanao.

The United States, meanwhile, will provide US$200,000 (P10 million), through the US Agency for International Development, to provide food, water, hygiene supplies and other relief items to victims, particularly in Surigao del Norte and Dinagat Islands.

“The United States is providing P10 million in immediate support, including food and shelter for communities affected by Typhoon Odette. We are committed to working alongside our friends and partners to provide emergency supplies and recovery assistance,” said US chargé d’affaires Heather Variava.

The Japanese government, through the Japan International Cooperation Agency, earlier said it would send generators, camping tents, sleeping pads, portable water containers and tarpaulins for use as roof covers to the Department of Social Welfare and Development (DSWD).

The New Zealand government, for its part, made a contribution of NZ$500,000 to the International Federation of Red Cross and Red Crescent Societies to support their ongoing relief efforts for the typhoon victims.

The United Nations Children’s Fund (Unicef) said its personnel were already on the ground performing assessments in collaboration with the Philippine government and partners.

The supplies were sent from Unicef’s Mindanao field office in Cotabato City to the Dinagat Islands, Siargao, Surigao City and Surigao del Norte.