‘Odette’ aid rushed; about half a million in shelters 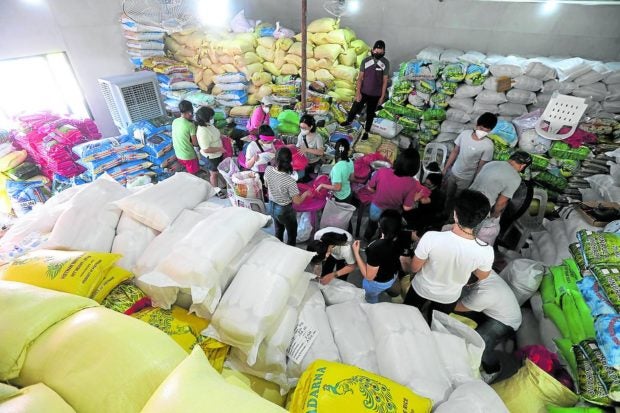 DISASTER RELIEF Volunteers pack food and other emergency needs for hundreds of thousands displaced by the most powerful storm to hit the country this year at a campaign headquarters for presidential candidate and Vice President Leni Robredo and her running mate Sen. Francis Pangilinan that was turned into a disaster relief operations center in Quezon City on Tuesday. —NIÑO JESUS ORBETA

As hundreds of thousands of people displaced by Typhoon Odette (international name: Rai) cry out desperately for food, water and shelter, government and private groups are being mobilized to ship relief supplies to the devastated regions, officials said on Tuesday.

President Duterte has also promised to raise up to P10 billion in fresh calamity funds for the “rehabilitation and recovery efforts” in areas devastated by the strongest typhoon to hit the country this year, according to acting presidential spokesperson Karlo Nograles.

In addition to military planes and vessels, private shipping and airline companies have also been tapped by the Department of Social Welfare and Development (DSWD) to speed up delivery of relief supplies. (See related stories on Pages A5 and A8.)

The Philippine Navy’s landing dock ship BRP Tarlac was to sail for Cebu on Tuesday night with a cargo of relief supplies. The ship is expected to reach Cebu on Wednesday afternoon, the military said.

A ship from the domestic Montenegro Shipping Lines had already delivered food packs to Siargao while AirAsia had flown supplies to Palawan, according to DSWD spokesperson Irene Dumlao.

“Our distribution of family food packs has been continuous as part of our response operations,” Dumlao said.

Based on DSWD’s data, P28.9 million worth of assistance have been distributed to typhoon-stricken areas as of Tuesday. The aid came from the DSWD itself (P17.3 million), local governments (P10.5 million) and nongovernmental organizations (more than P1 million), she said.

Dumlao said the food relief supplies were “prepositioned in strategic areas” before the typhoon hit but could not immediately say how many families or individuals had received them.

She said reporting by DSWD’s field personnel was being hampered by downed communication lines and power outages in areas heavily-affected by the typhoon.

Danilo Atienza, Southern Leyte province’s disaster chief told Reuters news agency that the prepositioned food and nonfood aid were not enough “because many are in need.”

Foreign aid has also started to arrive, including from Japan and China, while the United Nations said it was working with partners to help in the areas of shelter, health, food, protection and other life-saving responses.

At least 56 were reported missing.

The Visayas regions, however, suffered the most devastation.

The President’s commitment to raise funds came after he said that the public coffers had been “immensely” depleted due to spending for the COVID-19 pandemic, a claim that some lawmakers and opposition groups had questioned, citing his administration’s P1.15-trillion loans for the health crisis and the money already preprogrammed in the budget for it.

Albay Rep. Joey Salceda said there were funds that the government could immediately mobilize for the typhoon-ravaged areas, specifically the quick response funds created under the National Disaster Risk Reduction and Management (NDRRM) Fund, plus the President’s Contingent Fund and his Social Fund.

Both the 2020 and the 2021 budgets for these funds were still valid, said the chair of the House ways and means committee.

“You have around P6.5 billion in available fund balances from the NDRRM Fund and the President’s contingent funds, based on latest budget reports,” Salceda said.

The President’s Social Fund received P2 billion from the Philippine Amusement and Gaming Corp. this year, according to Salceda.

“So, there is definitely money to spare for these areas,” he said.

He said the government could also work with Congress to reprogram some funds from agencies with large outstanding balances.

He could not immediately say how much additional funds such reprogramming could raise for the Odette disaster relief effort.

Salceda also urged the NDRRMC to recommend the declaration of a state of calamity in several regions in the country to activate measures such as price controls, reprogramming of funds for infrastructure repair, and the granting of no-interest loans by the government financial institutions.

Surigao del Sur Gov. Alexander Pimentel said he had called a special session of the provincial board so that a state of calamity could be declared in the province.

Pimentel said his province was not extensively damaged unlike Surigao del Norte. Still, 45,043 families, or 104,257 individuals, were affected by Odette and some parts of the province were still without power and communication, he said.

Nograles thanked Filipinos for “showcasing the Filipino bayanihan spirit in helping our kababayans in this time of great need.”

“We likewise express our sincere gratitude to our friends in the international community and partners for their show of support, solidarity and readiness to extend assistance to the Philippines,” he said. —WITH REPORTS FROM LEILA B. SALAVERRIA, JEANNETTE I. ANDRADE, NESTOR CORRALES, DEMPSEY REYES AND REUTERS