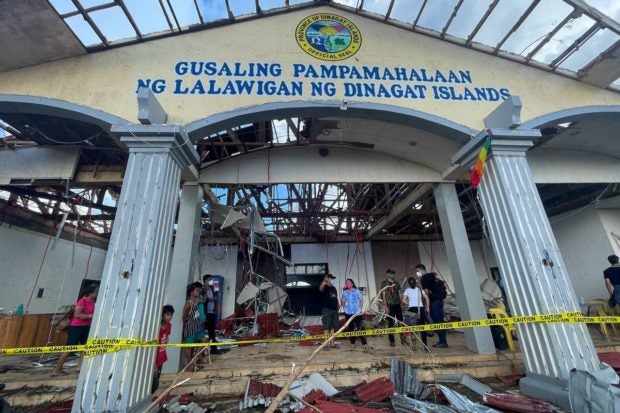 MANILA, Philippines — Just how bad was Typhoon Odette’s onslaught over parts of Visayas and Mindanao?

According to Vice President Leni Robredo on Monday — who visited Odette-hit areas from Friday to Sunday — it appears that provinces in the Caraga Region, especially Surigao del Norte and Dinagat Islands, were the hardest-hit areas as a lot of structures were toppled by the typhoon.

(There was one building in Dinagat Islands which was new, I think it belongs to COA, in front of the provincial capitol.  Many people used that as an evacuation center because it is new and sturdy.  It sustained damage, but at least it did not collapse.)

(But on the roads we traversed?  We did not see any house that was still standing. That’s the extent of the damage.)

Robredo said they were devastated to learn of the worsening conditions every each trip — as they thought they had seen the worst in Surigao del Norte, only to be surprised at what had happened to tourist haven Siargao.

And then after leaving Siargao, things were even worse in Dinagat Islands — where people were desperate to get any bit of help from the government.

(Maybe that’s where the devastation was so intense.  When we got off the aircraft near a school, many people approached us and were crying.)

(It’s like they are saying, it’s my impression, that they are crying out of helplessness but at the same time, relief as government officials arrived.  Because they told us that ‘it’s a good thing you landed here so that you can help us.  Because they were telling us: a chopper hovered this area a while ago but they appeared to be doing inspections.  They said it seems they were forgotten.)

Even the Siargao airport and establishments were leveled, confirming the resident’s and locals’ requests for assistance.

(When we reached Surigao Airport, we saw the situation immediately, as the Siargao Airport was on the ground.  Almost the whole airport collapsed.  Moving from the airport to the city hall, we saw that almost none of the electric posts were still standing.)

(And I was able to talk to those who lost their homes. I think we caught that on video.  But his story and of others who were there, they told us that it is not a mere storm. It seemed like a deluge.  That is how they described the situation in almost all of the areas we visited.)

The Vice President said that the provincial government of Dinagat Islands and Surigao del Norte have prepositioned goods that would serve as relief for people affected by the cyclone.  However, the items got wet also during the onslaught of Typhoon Odette.

As of the latest count, 14 people died in Dinagat Islands, while over 14,000 houses in the province were left destroyed.

READ: Dinagat Islands’ leveled to the ground’ by typhoon; governor appeals for help

Nationwide, numbers from the Philippine National Police (PNP) showed that 208 have died due to the typhoon.

Starting last Thursday, Odette ravaged through Visayas and Mindanao, hitting the northern portion of Caraga Region before moving to the southern parts of Eastern Visayas, Central Visayas, and then Palawan.

At its peak, Odette packed maximum sustained winds of 195 kilometers per hour (kph) near the center.