The center of Odette was estimated to be 380 kilometers Northwest of Puerto Princesa City, packing maximum sustained winds of 155 kilometers per hour (kph) with gustiness of 190 kph.

Odette is seen moving west northwestward and may exit the Philippine area of responsibility (PAR) by Saturday morning or afternoon.

Signal No. 3 is currently raised in Kalayaan Islands where destructive typhoon-force winds are now prevailing or expected within 18 hours.

The western portion of Palawan is under Signal No. 1, where strong winds are now prevailing or expected to occur within 36 hours. 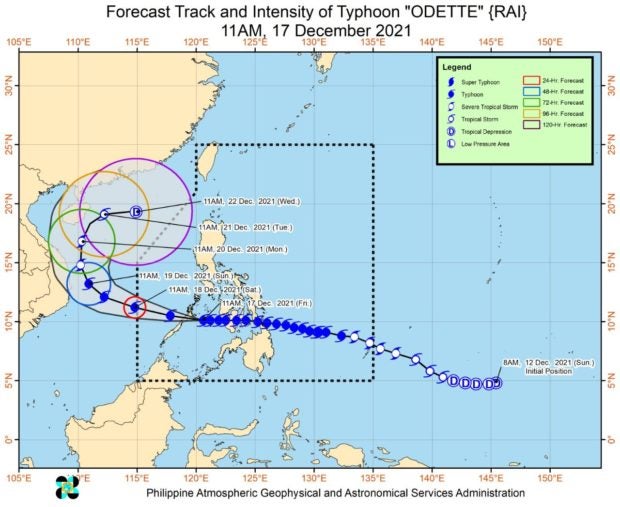 “Under these conditions, scattered to widespread flooding (including flash floods) and rain-induced landslides are expected especially in areas that are highly or very highly susceptible to these hazards as identified in hazard maps, and in localities with significant antecedent rainfall,” Pagasa warned.

Pagasa also warned of coastal inundation and gale warning in many seaboards in the country nationwide.

“These conditions are risky for all types of sea vessels. Mariners are advised to remain in port or take shelter in port until winds and waves subside.