DSWD sends out relief goods all over Visayas, Mimaropa ahead of TS Odette landfall 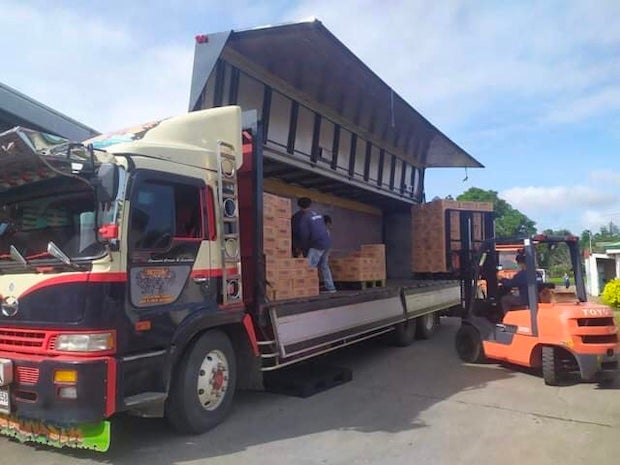 These are among the Family Food Packs distributed to various areas on Tuesday, Dec. 14, 2021, by the DSWD Western Visayas. (Photo from its Facebook page)

MANILA, Philippines — Regional offices of the Department of Social Welfare and Development (DSWD) have delivered relief goods in various areas of the Visayas and Mimaropa ahead of the expected landfall in Eastern Visayas of Tropical Storm Odette on Thursday, Dec. 16.

In a Facebook post on Tuesday, the DSWD Eastern Visayas said 20,600 Family Food Packs had been stored in various warehouses in the region, distributed as follows:

The total cost of the food packs is P10.38 million.

According to the DSWD Eastern Visayas, it had taken part in a Pre-Disaster Risk Assessment conducted by the  Regional Disaster Risk Reduction and Management Council (DRRMC).

It has also assigned a Quick Response Team (QRT) to carefully monitor the looming storm.

According to the regional office, local governments have the responsibility to be the first responders during a disaster under the Disaster Reduction and Management Act (Republic Act 10121).

So it would release the relief goods on the request of the local governments.

Apart from Eastern Visayas, other regional offices have also readied their own relief goods.

Other regional offices have made their preparations for the storm.

The DSWD Central Visayas (Region 7) has also assigned a QRT and stockpiled 23,642 Family Food Packs that have been distributed in Bohol, Cebu, and Negros Oriental. At the moment, the office has P752,250 in stand-by funds.

The DSWD Mimaropa (Region 4-B) has distributed 26,771 food packs to Oriental Mindoro, Occidental Mindoro, Palawan, Marinduque, and Romblon. It has a stand-by fund of P1,114,596.78

Meanwhile, DSWD Western Visayas (Region 6) has already delivered 3,400 food packs to Bago City in Negros Occidental, 1,700 to Dumarao in Capiz, and 2,700 to Banga in Aklan.

Prepositioning of family food packs (FFPs) in Aklan, Capiz, and Negros Occidental. A total of 3,400 FFPs were…

Signal No. 2 may be raised over part of Eastern Visayas on Wednesday, according to the Philippine Atmospheric, Geophysical and Astronomical Services Administration.

Duterte orders agencies and LGUs to brace for incoming storm