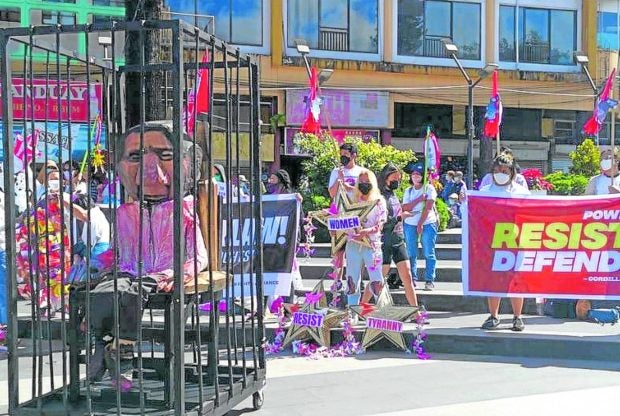 Students of the University of the Philippines Baguio marched down Session Road on Friday morning carrying small lanterns shaped like cartoon fists with the phrase “Wakasan na (End it now),” while other activists held up conventional lanterns with the messages: “Defend Human Rights” and “No More Martial Law.”

Human rights advocates who took part in the parade called for a resumption of peace talks with communist rebels while they slammed government programs introduced by the Duterte administration that attacked mainstream activism.

Human rights lawyer Jose Molintas said it was crucial for the government and the rebels to once more sit down and peacefully resolve their differences, given that Republic Act No. 11479 (the Anti-Terrorism Act of 2020) remains a threat to all forms of dissent by ordinary citizens and noncombatants.

The Supreme Court ruled this week that the antiterror law was constitutional for the most part, striking down Section 4 of the law for violating freedom of expression. 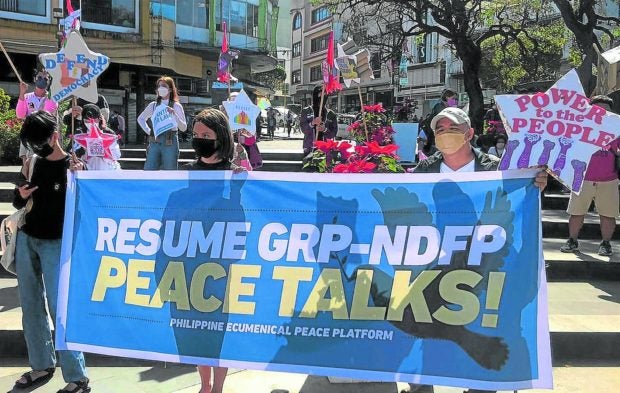 According to the high court, Section 4 is “being overbroad” as it enumerates acts that shall not be qualified as terrorism, among them “advocacy, protest, dissent, work stoppage” and other activities that “are not intended to cause death or serious physical harm.”

The Supreme Court also ruled that a portion of Section 25 was unconstitutional for setting the automatic adoption of all terrorist designations applied on any group by foreign governments or the United Nations.

But the terror law retains features that affect due process and other established civil rights in light of an environment where government officials are able to “Red-tag” activists, Molintas said.

For instance, journalists covering organizations later declared as terrorists could find themselves charged for inciting or supporting a terrorist group under RA 11479, said Inquirer correspondent Kimberlie Quitasol, who represented the National Union of Journalists of the Philippines during the march.

Virginia Dammay, chair of women’s group Innabuyog, said the peace talks would need to make up for years of “state-sponsored aggression” against militant organizations after Mr. Duterte ended negotiations with the Communist Party of the Philippines in 2017. 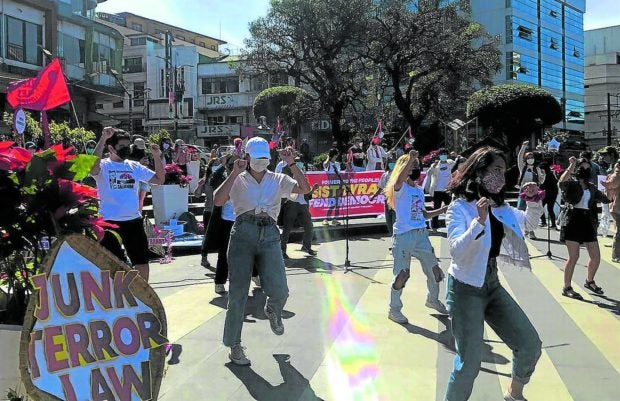 JUNK TERROR LAW Student activists march with miniature cartoon fists with the phrase “Wakasan na (Let us End it)” and call for the junking of the Terror Law during the “parol” (Christmas lantern) protest march on Friday along downtown Baguio City to mark International Human Rights Day. VINCENT CABREZA

Some people along the sidewalks mocked the marchers, calling them “terrorists.” Others yelled out “Bongbong,” or Ferdinand Marcos Jr., the son of the late dictator who is seeking the presidency.

Students who joined the rally said they “stepped forward and spoke out against things that needed to be righted.”

One of the student leaders stressed that they were “not communists nor terrorists but ordinary citizens who want change.”

“We must fight for human rights because without human rights, we do not have humanity,” said Windel Bolinget, chair of Cordillera Peoples Alliance.

Bolinget was included in the 2018 dissident list when the Department of Justice petitioned a Manila court to declare 600 people as terrorists.

Also on that list were Molintas and Baguio-based indigenous activist Victoria Tauli-Corpuz, former UN special rapporteur on the rights of indigenous peoples. Their names were stricken off the list. —Vincent Cabreza