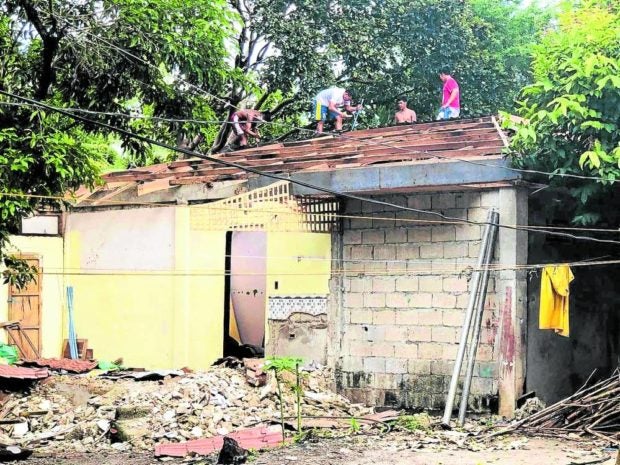 SELF-DEMOLISHED Fearing arrests, several long-time residents of Barangay Manoc-Manoc on Boracay Island have demolished their houses, which have been declared illegal for allegedly occupying areas within the 30-meter beach easement. PHOTO COURTESY OF CRIS CAHILIG

ILOILO CITY—A group of longtime residents of Boracay Island were appealing for the suspension of the demolition of houses and ejection of occupants of lands declared as government properties, at least until Christmas and until they can be assured of resettlement.

In a letter dated Dec. 9, Natives of Boracay and Business Stakeholders Inc. (NABBSI) appealed to the Aklan provincial government and the municipal government of Malay town, where the island is located, to suspend the demolition of houses along the 30-meter beach easement.

The houses up for demolition or have been demolished in Barangay Manocmanoc belong to more than 30 families or more than 100 people, mostly fishermen and rank-and-file workers on the island, according to Cris Cahilig, NABBSI vice president and spokesperson.

“We are also appealing for a relocation within Boracay only since most of the affected families are either fishermen or working in Boracay. Their livelihood is here in the island [and] they have been living here for generations,” according to the letter.

The Malay municipal government since 2018 has been issuing notices to vacate and self-demolish for occupants and owners of structures within the 30-m beach easement and in areas declared as forestland.

This is part of the rehabilitation of the island, which was started during the six-month closure to tourists from April 26 to Oct. 25, 2018.

Environment Secretary Roy Cimatu, chair of the Boracay Inter-Agency Task Force (BIATF), had earlier assured that there would be no demolition of structures if there would be no relocation sites for those dislocated.

But the BIATF said the removal of the illegal structures was a main component of the rehabilitation of the island.

Since December last year, the National Bureau of Investigation has conducted operations and has arrested and filed criminal charges against those who did not self-demolish their properties within no-build areas.

Many of those in areas declared as forestland are protesting their removal from properties they have long occupied and were given permits by the local government and government agencies.

Those who have agreed to self-demolish have appealed for government assistance in rebuilding their houses and for a relocation site.

Cahilig said those affected were given from P5,000 to P30,000 per house, depending on the damage to their properties.

A relocation site has been identified on the mainland Malay but it is unacceptable for most of those affected because it is far from their livelihood or work.

Sen. Risa Hontiveros on Nov. 17 filed a resolution directing appropriate committees of the chamber to investigate the complaints of residents against the demolition of their houses, alleged warrantless arrests and incomplete rehabilitation of the island.

“Environmental protection should always be people-centered and rehabilitation should never exclude the host communities, particularly those communities who have lived on the land for time immemorial and have vested rights to the same,” according to the resolution.

The resolution was referred to the Senate committees on environment, natural resources and climate change and on local government on Nov. 22.