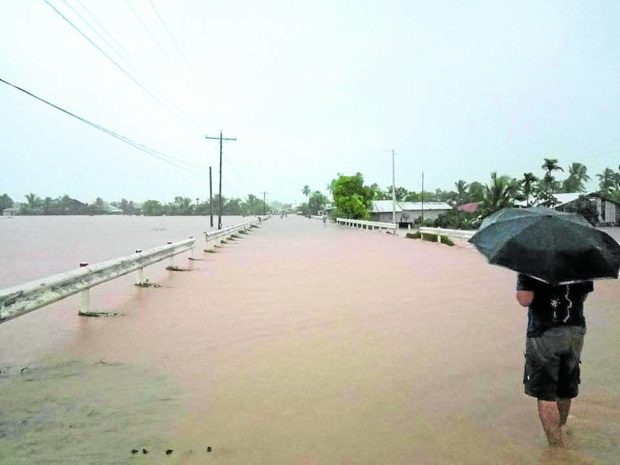 TACLOBAN CITY—Work, classes and COVID-19 vaccinations were suspended in some provinces in Eastern Visayas since Wednesday as heavy rain battered the region, triggering flooding and landslides, disaster response officials said.

The regional and provincial disaster risk reduction and management councils have been monitoring the situation, which was caused by the tail end of a frontal system, or shear line.

Floods were reported in the towns of Arteche and Quinapondan, both in Eastern Samar, where many roads were rendered impassable to all types of vehicles.

Flooding was also reported in the towns of Jipapad, Gen. MacArthur, Can-avid and Guiuan.

No one, however, was reported hurt in these areas.

Government and private office work and online classes were suspended in the towns of Palo, Babatngon and Tanauan, and Tacloban City, all in Leyte province; Mercedes, Giporlos and Guiuan towns in Eastern Samar; Cabucgayan and Almeria towns in Biliran province; and Lope de Vega town in Northern Samar.

The inclement weather also led to the suspension of scheduled vaccinations in several parts of the region, including in Tacloban City.

According to the Philippine Atmospheric, Geophysical and Astronomical Services Administration, the shear line will bring cloudy skies with scattered to widespread rain showers and thunderstorms over Eastern Visayas region, and the provinces of Masbate and Sorsogon in Bicol region. —JOEY GABIETA