Pacquiao: With messy justice system, PH not yet ready to have death penalty 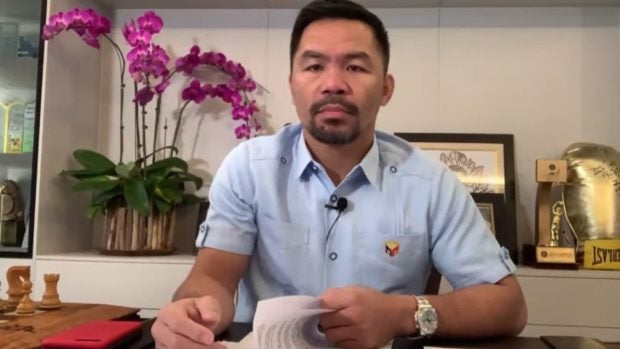 MANILA, Philippines — Presidential aspirant Manny Pacquiao believes it is not yet time to “activate” death penalty as the justice system is not yet fixed and remains “messy.”

Pacquiao on Wednesday said a faulty judicial system could result in many innocent individuals sentenced to death.

(We can activate death penalty but from what I am seeing as the situation in the government, I believe it is not yet time to activate it because the judicial system remains messy.)

“Baka maraming ma-sintensyahan na walang kasalanan [Many innocent individuals may be sentenced to death],” he added.

Pacquiao said that if he is elected president, he will improve the justice system in the country.

In 2019, Pacquiao sought the reimposition of the death penalty for illegal drug traffickers and manufacturers.

Pacquiao filed Senate Bill 189 that seeks to impose the death penalty with a fine ranging from P1 million to P10 million to persons who will import, sell, distribute, manufacture, possess illegal drugs, cultivate or culture plants classified as dangerous drugs, and maintain a drug den, dive or resort.

Recently, however, Pacquiao said he putting his plan on hold.