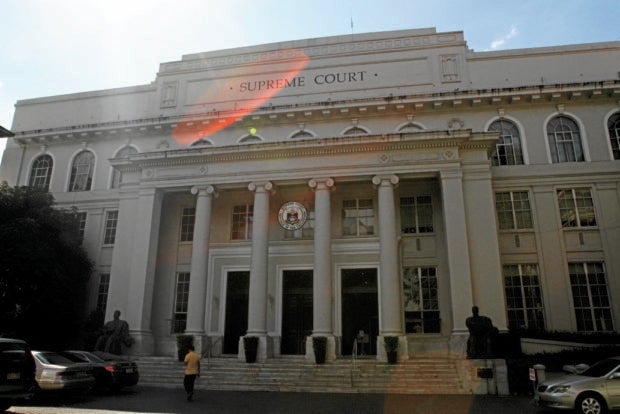 Supreme Court of the Philippines in Manila (File photo by RICHARD A. REYES / Philippine Daily Inquirer)

In an advisory issued by the Public Information Office (PIO), voting 12-3, the High Court strikes down for being overbroad and violative of freedom of expression the qualifier portion of Section 4 stating that “…which are not intended to cause death or serious physical harm to a person, to endanger a person’s life, or to create a serious risk to public safety.”

Another portion that has been stricken down is the second method for designation under Section 25.

Other provisions subject to the more than 30 petitions, the High Court’s PIO announced “are not unconstitutional.”

“The main ponencia (main decision) and the various opinions contain interpretations of some of the provisions declared in these cases as not unconstitutional,” read the SC-PIO’s advisory.

The Anti-Terrorism Act was signed into law on July 3, 2020, and took effect on July 18. It is the subject of 37 petitions before the Supreme Court, making it the most contentious law to date.

Basically, the law challenges at least 15 fundamental rights under the 1987 Constitution: 1. freedom of speech and expression; 2. freedom of religion; 3. freedom of assembly; 4. freedom of association; 5. freedom of the press; 6. the due process of law; 7. freedom from unreasonable searches and seizures; 8. right to privacy; 9. right to travel; 10. right to bail; 11. presumption of innocence; 12. freedom of information; 13. right against ex post facto laws and bills of attainder; 14. right against torture and incommunicado detention and 15. academic freedom.

Aside from the 37 petitions, several reiterative motions were also filed by various petitioners after some of its petitioners have been arrested or red-tagged by government forces as having ties with the leftist groups.