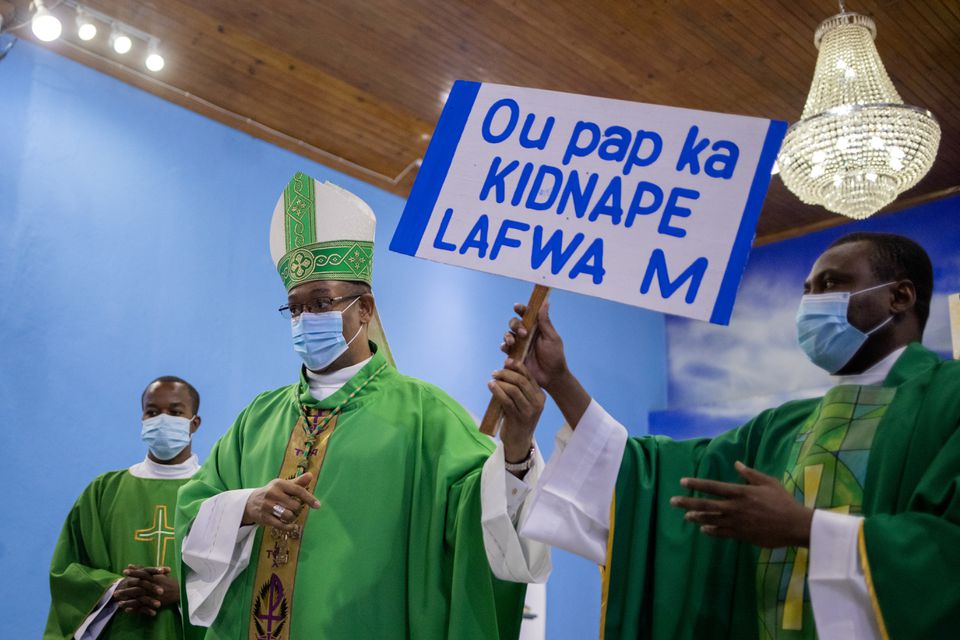 Max Leroy Mesidor, the Metropolitan Archbishop of Port-au-Prince, hands off a placard that reads “You cannot kidnap my faith”, which he received as an offering from worshippers during Sunday Catholic Mass at the Chapelle de l’Immaculee Conception de l’HUEH in Port-au-Prince, Haiti October 31, 2021. REUTERS/Adrees Latif/File Photo

Three missionaries who were kidnapped in Haiti in October have been released, the U.S. State Department and the Ohio-based missionary group that organized the group’s trip to the Caribbean nation said on Monday.

“We are thankful to God that three more hostages were released last night. Those who were released are safe and seem to be in good spirits,” Ohio-based Christian Aid Ministries said in a statement.

U.S. State Department spokesman Ned Price on Monday confirmed the release, adding that the United States is continuing to work to secure the release of the others.

Haitian National Police spokesman Garry Desrosiers said the three were released on Sunday night. He declined to give additional details, citing the security of the remaining hostages.

Sixteen Americans and one Canadian, including five children, were abducted after visiting an orphanage. The incident has highlighted Haiti’s dire kidnapping problem, which has worsened in recent months amid economic troubles and political upheaval.