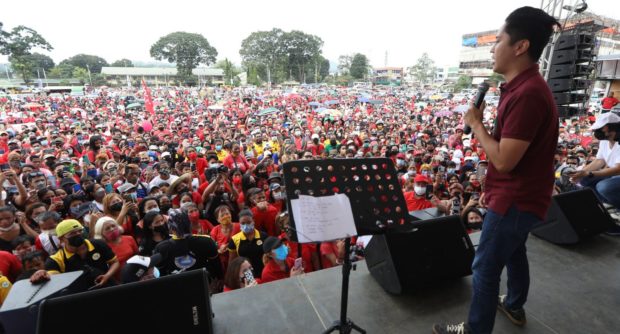 Sandro Marcos, the son of presidential aspirant Ferdinand “Bongbong” Marcos Jr. addresses the supporters of his father in Bukidnon. Image from BBM camp

Marcos asked for support for the tandem of his father and Davao City mayor Sara Duterte in the upcoming 2022 national elections.

(So now until the election, BBM-Sara UniTeam is looking forward to your support and help so that when the time comes and when the right day comes, BBM-Sara will help you all.)

For his part, Romualdez also thanked the crowd for their support to the Marcos-Duterte tandem during the rally.

After the rally, Marcos, Romualdez and Tingog Party-list nominee Jude Acidre then attended the inauguration of the UniTeam-Tingog party-list headquarters in Bukidnon.

The 27-year-old scion of the Marcos family himself filed his certificate of candidacy for congressman in the 1st District of Ilocos Norte.