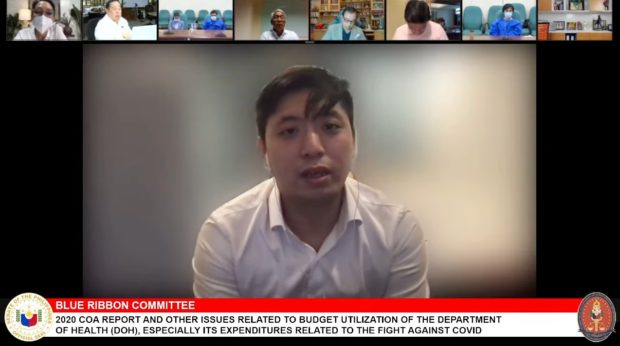 MANILA, Philippines — The Singapore-based chairman of Pharmally Pharmaceutical Corp. on Friday apologized to senators for not being hands-on with the firm’s documentation but denied that its failure to properly organize its financial records was intentional.

During the resumption of the Senate blue ribbon committee’s investigation, senators prodded Pharmally officials regarding the whereabouts of its financial documents earlier subpoenaed by the panel.

“I know it is no excuse, as a company, it is no excuse to not have these things properly documented and filed and on-hand and ready. But it is not intentional. I don’t think it is intentional,” Pharmally chairman Huang Tzu Yen told senators.

The failure to turn over these records to the panel in the past weeks led to the transfer of Pharmally executives Mohit Dargani and Linconn Ong to a city jail and the detention of Pharmally acting president Twinkle Dargani in the Senate compound.

All three of them insisted on not knowing the location of the documents.

“I do not have most of the copies of the cost of goods sold cause I’m overseas and I wasn’t hands-on with this and I apologize for that. But I think for many of the deliveries we make, I think I did request for these pictures, some photos of deliveries,” Huang, who is currently in Singapore, said.

“I would compile those but in terms of document-wise I will try but I really do not have a lot of those, I apologize,” he added.

Pharmally has been at the center of the blue ribbon’s investigation into the government’s medical supply purchases at the height of the pandemic last year.

The firm was able to secure over P8.6 billion worth of supply contracts in 2020 despite being incorporated only several months prior with a P625,000 paid-up capital.

Read Next
Corruption in PH: Where presidential aspirants stand
EDITORS' PICK
Acer starts the year off strong with the Aspire Vero National Geographic Edition
Comelec division junks petition to cancel Marcos COC for president
PH logs 37,070 more COVID-19 cases; over 33K others recover
The best of bayside and city living at SMDC’s Sail Residences
‘Not yet the end’: Lawyer says Marcos Jr’s DQ cases to take lengthy process
Over 3 Million worth of prizes to be won at Smart Padala’s SENDali Manalo Promo!
MOST READ
NBI foils escape attempt of Kerwin Espinosa, two others
Marcos camp ‘extends hand of unity’ after COC cancellation bid is thrown out
Wendell Ramos finally gets to hold his newborn for the 1st time
No vaccine, no French Open for Djokovic, says French Sports ministry
Don't miss out on the latest news and information.