Libya ferry on first passenger trip to Turkey in decades 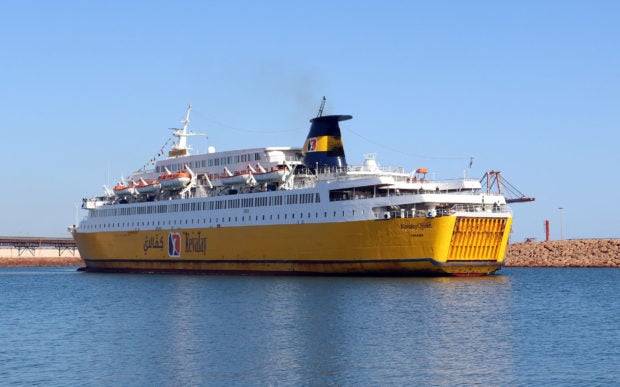 A ship sails from the Lybian northwestern port city of Misrata on December 1, 2021. AFP

MISRATAH, Libya — A ferry set sail on Wednesday from the Libyan port of Misrata to Turkey’s coastal city of Izmir, 40 years after the last passenger vessel plied the route.
Libya has not been serviced by any international ferries for 25 years.
Travel links with and within the country were severely disrupted by the 2011 revolt that overthrew longtime dictator Moamer Kadhafi, and years of unrest which followed.
During Kadhafi’s rule, from 1969, the country was under sanctions and largely closed to tourists.
The revived crossing to Turkey is operated by Libyan company Kevalay. It should take 48 hours and the vessel is set to return on December 7.
“We have deals to launch other links, including with Egypt and Tunisia,” said Taha Hadid, an official at the port of Misrata, Libya’s third city.
Misrata, about 200 kilometres (125 miles) east of Tripoli, is home to numerous Turkish businesses.
Air travel has also begun to return.
Airports were heavily damaged in Libya’s fighting and many air links were suspended, but some have resumed since an October 2020 ceasefire between the main rival camps.
ADVERTISEMENT
FEATURED STORIES
NEWSINFO
Rooftop shooter kills 6 at July 4 parade in Chicago suburb
NEWSINFO
Escudero raises ‘unique legal quandary’ over Marcos’ first veto
NEWSINFO
Bongbong Marcos holds first Cabinet meeting