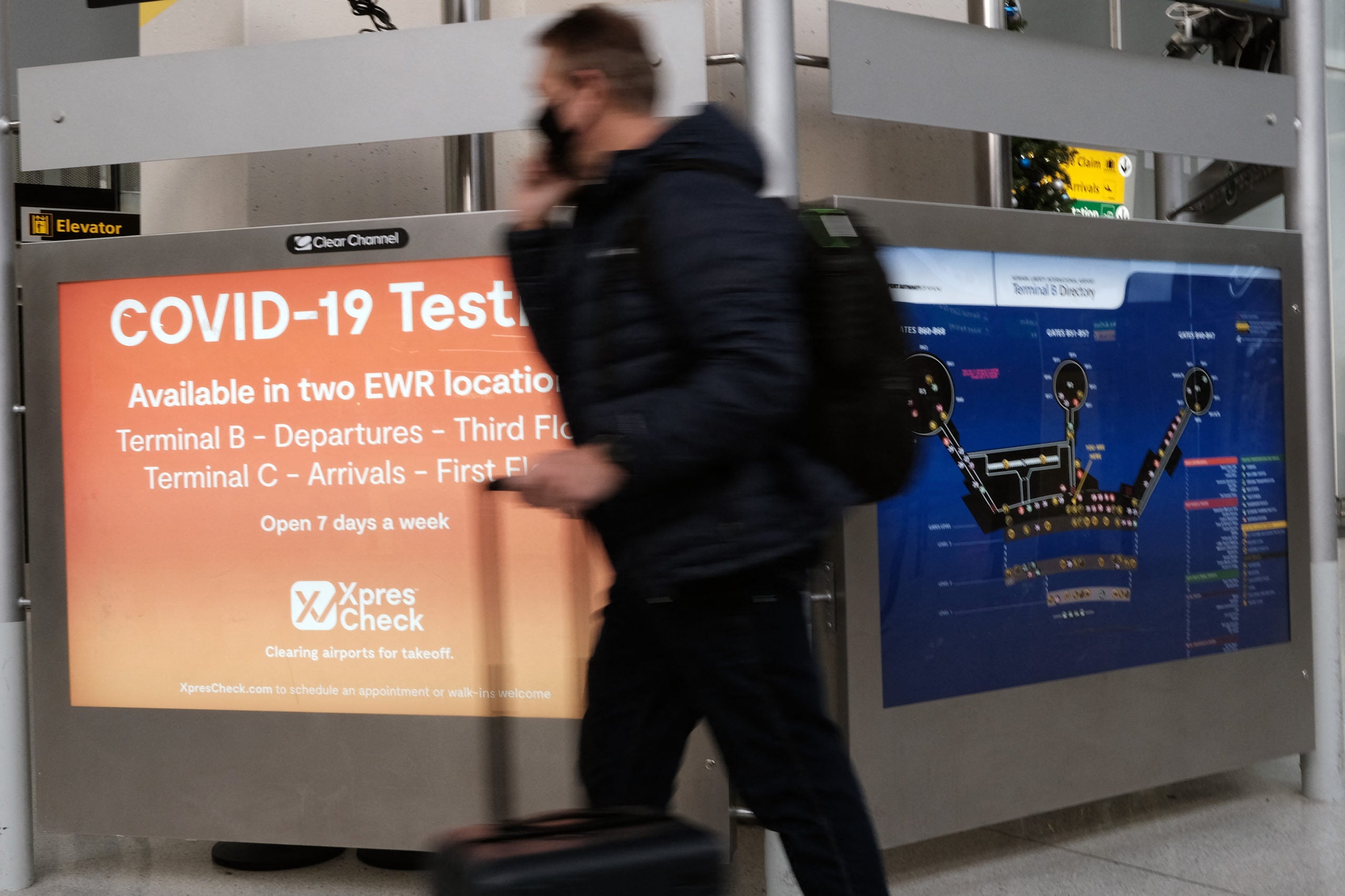 NEWARK, NEW JERSEY – NOVEMBER 30: A COVID-19 testing facility is advertised at Newark Liberty International Airport on November 30, 2021 in Newark, New Jersey. The United States, and a growing list of other countries, has restricted flights from southern African countries due to the detection of the COVID-19 Omicron variant last week in South Africa. (Photo by SPENCER PLATT / GETTY IMAGES NORTH AMERICA / Getty Images via AFP)

THE HAGUE, Netherlands — The Omicron coronavirus variant was present in Europe before the first cases were reported in South Africa, new data from the Netherlands showed Tuesday, as Latin America reported its first two cases in Brazil.

In the week since the new virus strain was reported to the World Health Organization by South Africa, dozens of countries around the world have responded with travel restrictions — most targeting southern African nations.

But the World Health Organization warned Tuesday — as Canada expanded its restrictions to also include Egypt and Nigeria — that “blanket” travel bans risked doing more harm than good.

And the likely futility of broad travel restrictions was underscored as Dutch authorities reported that Omicron was present in the country before South Africa officially reported its first cases, on November 25.

The new variant — whose high number of mutations the WHO believes may make it more transmissible or resistant to vaccines — was found in two Dutch test samples from November 19 and 23, with one having no travel history.

With countries now on alert for the Omicron variant, a clearer picture is emerging by the day of where it has been circulating, and for how long.

So far, well over a dozen countries and territories have detected cases, including Australia, Britain, Canada, Hong Kong, Israel, Italy, and Portugal.

Among European countries, Belgium and Germany have both reported cases of the new strain prior to November 25, but both linked to foreign travel.

Latin America reported its first two cases Tuesday — in people who traveled from South Africa to Brazil — and a first case was confirmed in Japan, one day after it barred all foreign arrivals.

While much is still unknown about the Omicron variant — it could take weeks to determine whether and to what extent it is vaccine-resistant — it has highlighted that the global fight against COVID-19 is far from over.

Asian, European, and US markets all fell on Tuesday, while the benchmark US oil price tumbled more than five percent after the boss of vaccine manufacturer Moderna warned existing jabs might be less effective against the new variant.

“All the scientists I’ve talked to … are like ‘this is not going to be good,” Moderna boss Stephane Bancel told the Financial Times, warning against a “material drop” in the effectiveness of current jabs against Omicron.

Moderna, US drugmaker Pfizer and the backers of the Russian vaccine Sputnik V are already working on an Omicron-specific vaccine.

On the treatment front, meanwhile, a panel of US health experts voted Tuesday to endorse Merck’s COVID pill for high-risk adult patients, which is already authorized in Britain.

In a briefing to WHO member states, the body’s chief Tedros Adhanom Ghebreyesus said it was understandable for countries to seek to protect their citizens “against a variant we don’t yet fully understand”.

But he called for the global response to be “calm, coordinated and coherent”, urging nations to “take rational, proportional risk-reduction measures”.

The UN agency cautioned in a travel advisory that “blanket” travel bans risked placing a “heavy burden on lives and livelihoods” and could ultimately dissuade countries from sharing data about the evolving virus — as South Africa did in reporting the latest variant.

But it did advise that people not fully vaccinated and considered vulnerable to COVID-19, including over-60s, should put off travel to areas with community transmission of the virus — after correcting a previous statement that indicated all over-60s should defer travel.

Omicron has emerged as much of the world was already bracing for a new winter wave of the pandemic — leaving even nations with high vaccination rates scrambling to stem infections and prevent health services from being overwhelmed.

In Germany, incoming Chancellor Olaf Scholz said parliament would vote on making COVID vaccines compulsory by the end of the year — and a source from Scholz’s party told AFP he had “signaled his sympathy” for such a rule.

Greece went ahead Tuesday in making vaccines compulsory for over-60s, while Norway will offer booster shots to all adults before Easter, as preferable to a lockdown.

Britain meanwhile set a target of delivering third jabs to all adults within two months, with Prime Minister Boris Johnson saying vaccination centers would be “popping up like Christmas trees.”