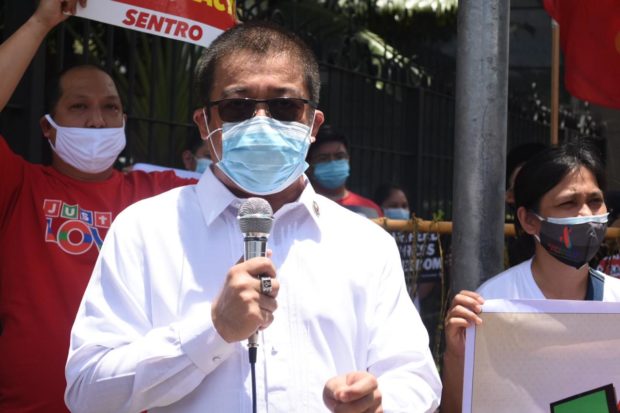 MANILA, Philippines — Filipinos should give due recognition and respect to real heroes like Andres Bonifacio, and reject those who claim to be heroes, like the late dictator President Ferdinand Marcos.

This was the call of House deputy minority leader and Bayan Muna Rep. Carlos Isagani Zarate as the nation observed the 158th birth anniversary of Andres Bonifacio on Tuesday.

In a statement, Zarate said the Filipino youth “should emulate instead the lives of the real heroes of our nation like Bonifacio,” a revolutionary who founded the Katipunan in 1892.

The Makabayan lawmaker urged Filipinos to study history anew and learn its lessons by stopping “denialist and revisionist narratives” of Marcos’ son, who is eyeing Malacañang in 2022.

“Let us give due recognition and respect for the likes of Bonifacio who sacrificed everything for the motherland. We must also be very wary and reject those who claim they are heroes, like the dictator Marcos, who was only looking out for his own vested interests,” Zarate said.

He added that with ex-Sen. Ferdinand Marcos Jr. aspiring to return to the Palace next year, Filipinos should “all the more be on guard” against attempts at “misinformation and revising history.”

“These denialist and revisionist narratives must be stopped and the youth must be enlightened on the real roles of these individuals and families, as well as what they did in turning our country into its present miserable state,” Zarate said.

As founder and Supremo of the Katipunan, Bonifacio is considered the “Father of the Philippine Revolution.”