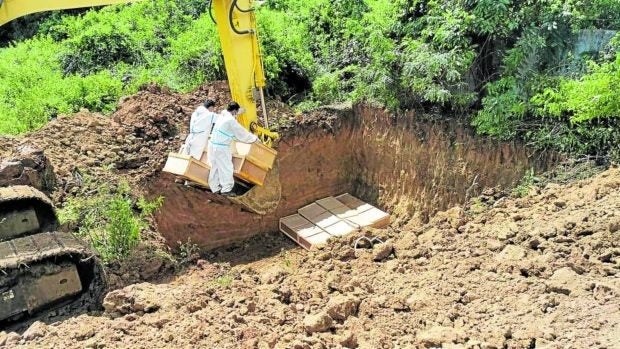 MASS GRAVE: Unclaimed bodies kept in a morgue in Zamboanga City for a year are buried in a mass grave. (Photo courtesy of the Zamboanga City Information Office)

ZAMBOANGA CITY, Zamboanga del Sur, Philippines — The city government buried 33 bodies, which had not been claimed for almost a year after these were given rites for the dead in a public cemetery at Barangay Talabaan here on Monday.

Maria Socorro Rojas, city social welfare officer, said 25 of the 33 bodies were males and seven were females. A fetus, whose gender had not been determined, was also buried.

She said some of the unclaimed bodies could be crime victims found in deserted areas in the city. Others died of natural causes in public hospitals or on the streets.

Belen Sheila Covarrubias, Zamboanga City information officer, said all the remains were suspected COVID-19 cases although these were not subjected to tests because most had been dead for several hours before their bodies were found. An ordinance mandates the local government, through the City Social Welfare and Development Office, to conduct mass burial for unclaimed remains every year, with the city shouldering the expenses for embalming, storage and coffins.

Profiles released by the city government showed that most of the unclaimed remains belonged to people who died of hypertension, natural causes, dehydration and other ailments. Seven died of unknown causes while two had bullet wounds.