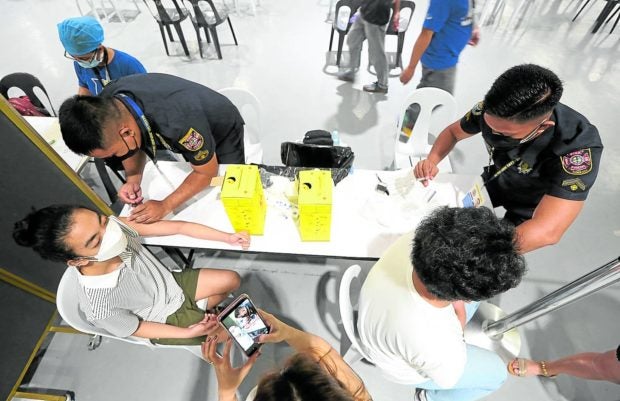 Residents receive their first dose of the COVID-19 vaccine at the vaccination center inside the Megatrade Hall of the SM Megamall, Mandaluyong during the National COVID-19 Vaccination Day, Nov. 29, 2021. (Photo by NINO JESUS ORBETA / Philippine Daily Inquirer)

MANILA, Philippines — Although short of the government’s target of three million, the 2.55 million people inoculated on Monday was 2.5 times the country’s daily average and put the Philippines in fifth place globally in terms of most vaccinations conducted in a single day, Health Undersecretary Myrna Cabotaje said on Tuesday.

Cabotaje, chief of the National Vaccination Operations Center, said the government and its partners would continue convincing more people to get vaccinated against COVID-19.

Cabotaje said that among the major challenges that they encountered were walk-ins, or those who go to vaccination sites without registration, who were not vaccinated, and the nonavailability of doses for minors in some centers.

Cabotaje called on local government units (LGUs) to accommodate everyone who wanted to receive the COVID-19 vaccine today, the last day of the campaign to jab nine million individuals at 8,000 sites nationwide.

“President Duterte’s directive is to accommodate everyone. The directive is we allow walk-ins to be vaccinated. All people who lined up to get vaccinated should not be allowed to go home without getting their vaccine,” Cabotaje said.

She added that the problem with the minors was that vaccines for the pediatric population were not available in some vaccination sites, although there were enough Pfizer and Moderna doses for the adolescent group.

There were also reports of overcrowding in vaccination sites.

“That’s another problem—but this is a happy problem—there was an overwhelming response of people in some vaccination areas. Large number of people came so there was also a delay in turnaround time because we have to control the crowds and ensure that social distancing is observed,” she said.

The Department of Health (DOH) said Calabarzon, Central Luzon, Western Visayas, Central Visayas and Bicol were the regions with the most vaccine recipients on Monday, the first day of the three-day “Bayanihan Bakunahan” campaign that ends today.

Cabotaje said marshals and ushers were deployed to implement health and safety protocols in vaccination centers.

The DOH official also said the delay in the submission of reports to the NVOC about the number of vaccine recipients was not due to a lack of personnel but to the fact that many vaccination centers were overwhelmed by would-be recipients, which prolonged the vaccination period and delayed the transmission of the reports.

In the capital region, Muntinlupa reached its 5,000 target for the first day of the vaccination drive after inoculating more than 7,287 residents.

In Parañaque City, the local government was able to administer 6,922 jabs on the first day of the national vaccination campaign, while Pasay vaccinated 3,401 individuals.

Mandaluyong City reported that it was able to administer 5,086 vaccines on Monday while Manila said it deployed 27,600 first and second doses and 6,759 booster shots for the eligible groups.

“It’s important because we are in a scenario that we now have the potential circulation of Omicron globally and even besides that, we are ahead of the Christmas season that we know that there could be a lot of gatherings and arrivals from abroad,” he said. 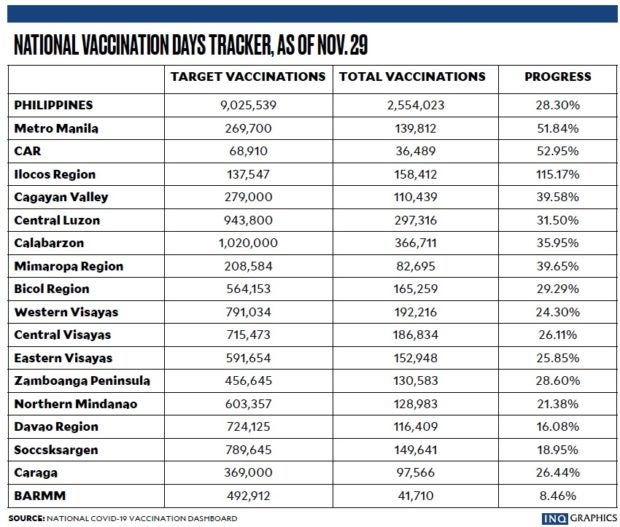 With the country having a lot of vaccines, he said the government should ensure that the most vulnerable were given their shots.

There should be priority lanes for the elderly and sickly, and mobile vaccination teams should be set up to administer to persons with disability and the elderly.

“We would urge the LGUs to take the leadership and make the arrangements so that more Filipinos can access vaccines so that we protect as many of them as possible and minimize the wastage of vaccines that are already in the country,” he said.

Meanwhile, Presidential Adviser for Entrepreneurship Joey Concepcion said the government should now aim to vaccinate nearly all Filipinos against COVID-19 as the economic impact of the Omicron variant has become worrisome.

“With variants continuing to emerge, I believe it is time we aim for close to 100 percent vaccination in the country,” Concepcion said in a statement on Tuesday. “Omicron has only made vaccine mandates urgent and justifiable. The country’s economy is at stake.”

“I still believe that while breakthroughs could increase with Omicron, vaccines can and will still prevent severe infections and hospitalization,” Concepcion said.

Since vaccinations began last March, only about 32 percent or about 35 million of the 110 million population in the Philippines had been fully vaccinated against COVID-19 as of Nov. 29.

More than 90 percent of the target population in Metro Manila had already been fully vaccinated as of early November, but vaccination rates were as low as 10 percent in areas such as the Bangsamoro Autonomous Region in Muslim Mindanao.

—WITH REPORTS FROM JANE BAUTISTA AND ROY STEPHEN C. CANIVEL